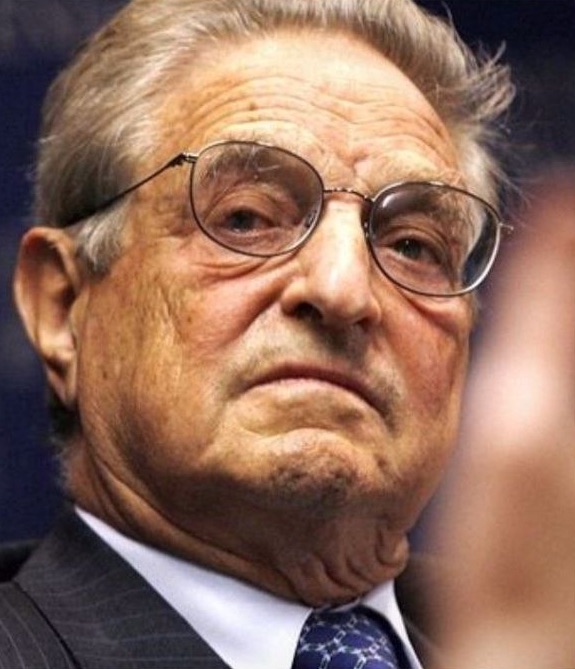 Who is George Soros? Born Schwartz Gyorgy (in Hungarian the family name comes first) on August 12, 1930, in Budapest, Hungary, to Schwartz Tivadar, a lawyer, and Schwartz Erzsebet, the co-owner of the family’s silk shop, he grew up in a secular, upper middle class family that was openly anti-Semitic. In response to the burgeoning anti-Semitism in Hungary, the father changed the family name in 1936 from Schwartz that clearly identified the family as Jewish to the Hungarian sounding last name of Soros. The family survived the deportations by obtaining forged Christian birth certificates. He fled in 1947 to England. In 1954, he graduated from the London School of Economics in philosophy. In 1956, he immigrated to the United States.

In 1969, Soros established the Double Eagle hedge fund which in 1970 was followed by Soros Fund Management. In 1973 renamed as the Quantum Fund, it has grown from $12 millions to over $40 billion. Soros’s political involvement has intensified with the growth of his personal wealth, estimated to be around $25 billion. In addition to financing far left organizations in the United States and across the world from 1979 on,he has started to finance dissidents across the former Soviet block. Advocating “open societies” whose declared objective was to open up the communist dictatorships through the free flow of political and scientific ideas, Soros financed the Solidarity movement in Poland, the Charter 77 in the former Czechoslovakia, and Andrei Sakharov’s efforts in the former Soviet Union. In 1984, he established the first Open Society Institute in his native Hungary.

Soros borrowed the idea of “Open Society” from Sir Karl Raimund Popper and Count R. N. Coudenhove-Kalergi, his professor in London and the spiritual leader of the Pan-European movement respectively. The former published his book entitled The Open Society and Its Enemies in 1950. In it Popper argued that every political theory from Plato to Marx had been totalitarian and thus denying intellectual and practical freedom to the individual. He also took exception to those philosophers’ visions of “apocalyptic revolution which will radically transfigure the whole social world.” Further arguing that such societies are “closed societies” that leave no room for individual freedom”, Popper confused his concept of “open society” with the notion of ‘civil society.” As a result, his doctrine of “open society” suffered from two main faults. On the one hand, it lacked a coherent and realistic view of political process in any given society. On the other hand, it never had the support of the all powerful law of political legitimacy upon which an institutionalized and well-functioning state rests. The result of the “open society” theory was a situation bearing the imprimatur of these shortcomings. Exactly as Plato, Marx, Hitler, and Stalin proponents of closed societies, Popper’s so-called “open society” was actually totalitarian, because of his thesis about the imperfection of the human mind that could only be enlightened by the few, who are sufficiently intelligent to connect superior thinking and reality.

However, Soros the pseudo-philosopher, carried Popper’s thesis about the imperfection of human knowledge further and reasoned in his intellectually inferior book Underwriting Democracy in 1991, that reflexivity, namely the mental process of cognitive function and the process that implements it and affects reality, renders the distinction between thinking and reality illusory. Thus, what appears to be a distinctively mental process is, in actuality, an integral part of reality. In this manner, Soros has added new faults to Popper’s initial ones. Since both Popper’s and Soros’s pseudo-scientific theories lack the value of stability, they have remained, and will mercifully remain, impractical and unimplementable. In reality, Popper’s and Soros’s vision of the so-called “open society” is a globalist cemetery suspended in a vacuum – the vacuum of lies and deceptions.

Through his pursuit of teaching and propagating the autocratic “open society” doctrine, Soros has hoped to create a collective state of mind and start an intellectual revolution across the globe that, like an avalanche, would be strong enough to uproot both democratic and totalitarian governments and replace them with a single world government. In reality, however, Soros has opened the door to identity politics that, instead of uniting, fragmented societies. In addition, Popper and Soros have been awfully inadequate in envisioning the whole picture, because they have absolutely ignored present and future realities. More importantly, they have had an exaggerated sense of self-importance, restless minds that have been possessed by hubris and ambition, mixed with misleading shrewdness that has known no scruples, have totally lacked realistic vision and have had no care for the actual future consequences, as their objective has remained an immediate and self-aggrandizing success. In this manner, Popper and Soros have not sought to reach conclusions based on facts but have intended to provoke a battle between their destructive “open society” thesis and reality.

In Soros, this sickness of the mind has been wrapped either in amateurish histrionism or in evil fanaticism which have gleefully accepted the destruction necessary for the success of his envisioned global autocracy. While Popper was born into the most turbulent and destructive decades of the 20th century, Soros grew into adulthood in a relatively quiet period of the second half of the 20th century and almost two decades of the 21st century, in which destructive revolutionaries have been mostly contained to a single country or region. And while Popper wanted to learn from history, Soros has strived to cheat history with his irrationality. In the latter case, revolutionary nonsense confuses good and evil, morality and immorality, the true meaning of life and the glorification of martyrdom, construction and destruction, dangerous illusions and truth. More importantly, when such an intellectual idiot penetrates the political and legal realms the perils are much more grievous and the beneficial effects much more uncertain.

In the late 1980s, Soros bankrolled several brainstorming sessions on the future of Europe at the International University Center of Postgraduate Studies in Dubrovnik, Yugoslavia. Here, the idea of a Central European University started to take shape. In May 1990, the countries of what later became known as the “Visegrad Four”, after the town at the band of the Danube in Hungary, Poland, Hungary and Czechoslovakia (which later split into the Czech Republic and Slovakia), decided to jointly support the establishment of such an institution. The then Czechoslovak government provided buildings in Prague and Bratislava, while the Hungarian government made a building available in Budapest for the Central European University. Officially opened as the first such university in April 1991, the Prague campus awarded master’s degrees in economics, environmental sciences, politics, sociology, and history. One of the conditions of the legislation establishing the university was that it must obtain accreditation within two years or to be shut down. Following numerous failed attempts to win accreditation in Luxemburg and other principalities, the Prague campus was moved in the fall of 1993 to Budapest. The same fate befell the Warsaw campus in 2003. The Bratislava campus was never opened. Meanwhile, the state of New York whose accreditation rules do not require a school to be physically located in the state, granted a provisional charter from the Board of Regents of the University of the State of New York, for and on behalf of the New York State Education Department in 1992, to the Central European University. In Hungary, the Central European University was officially recognized as a privately maintained and operated university by Law No. LXIV of 2004.

Since then, the university has offered accelerated one year MBA and part-time Masters programs in Technology Management and Innovation, Business Analytics and Finance, several Executive Education Programs, and International Management (IMM) Executive MBA. Clearly, Soros cleverly used a legal loophole in the laws of the state of New York to establish a graduate school in Budapest, Hungary, without having any higher educational activities whatsoever at the place of accreditation, namely, in the state of New York. This loophole has enabled him to grant MBA diplomas with international validity. Thus, a diploma issued by the Central European University in Budapest, Hungary, is deemed to be issued also in the state of New York, United States of America. Consequently, any person from any part of the world can earn an American MBA, and even a Ph.D. without ever physically entering and being present in the United States of America.

This essentially business arrangement carries a positive as well as a negative character, without contributing to sustaining or raising the quality of educational standards in the Central European University or in the United States of America in general. On the positive side, it allows many non-US citizens, who could not afford the costs associated with graduate studies in America, to obtain a US graduate degree. On the negative side, the equivalency of such degrees cannot be scrutinized or questioned across the fifty states of the USA. More generally speaking, Soros could use the same strategy to establish similar universities throughout the world. From the activities of the Central European University to placing the graduates in American jobs, including the federal and state governments, to implement Soros’s open society concept, the possibilities to commit political mischief in the name of democracy are endless. Finally, considering Soros’s financial prowess, such arrangements swing the door wide open for corrupting bureaucracies and the private business sphere alike.

Based on these concerns, the Hungarian Parliament, the Orszaghaz, voted to amend Law No. CCIV of 2011, on the National Higher Education, mandating that universities operating within the European Union shall have an actual physical presence in the original state of operation, where equivalent degree programs are offered. Moreover, such universities can only operate in Hungary when the Hungarian government has an agreement with the mother university of operation. Finally, the law states that non-EU academic personnel shall apply for work permits in Hungary.

The outcry against the new Hungarian legislation is not totally unexpected. Those who have been fighting for socialism and communism in the belief that it is better than democracy or free market capitalism, and cursed by their tunnel vision, having lost any objectivity, are using the arguments of democracy to overthrow it. The most important question that was asked at the beginning of this writing is the same that must be asked again: Why has Soros struggled so hard and so relentlessly to bring about changes in countless number of countries when he does not possess the practical means of foreseeing whether the changes are good or bad? Why has Soros expended so much money for his vision of “open society” when democracy has been proven repeatedly to be more stable, enduring and successful than the mirage of globalism in the forms of fascism, national socialism overlaid by racism, communism, socialism or social democracy?

The answer to these questions is straightforward and fairly simple: It is man’s desire to be the part of history by attaining power in order to control societies, states, and governments. Fortunately, however, these human activities are never isolated and never unfold by themselves alone. These activities never exist and act in a vacuum. They always work within the political systems, the cultures, the traditions, the customs, the religions, and the economic realities of any given society and country. The inequalities present in every society are the result of the diversity of human mind, education, and emotional disposition.

Superimposing any rigid doctrine of universal remedies to the complexity and diversity of human existence will only lead to the complete annihilation of human civilization. Globalism is a phantom, a Potemkin village that makes mockery out of individual and universal progress. Societies, states, governments must be controlled by the governed and not by a resplendent super aristocracy. Personal freedom and integrity of the individual are the two pillars upon which the stability and peace of every well-functioning society are founded. These qualities are clearly in danger from Soros and his activities. To save humanity from him will require a concerted effort by all freedom loving people and governments.