Getting Serious about Syria 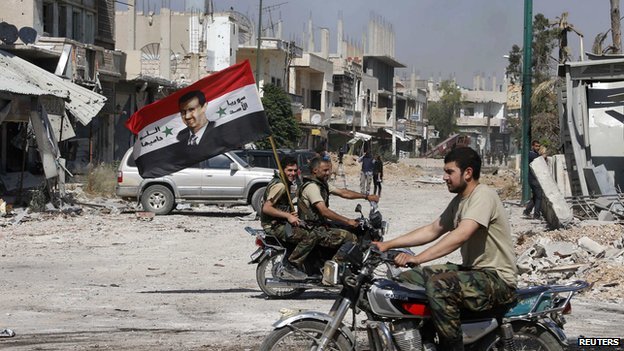 Even in the best of times the greater Middle East had been beset by political instability, economic suffering, social discontent, and a permanent psychological oscillation of the peoples between traditional apathy and violent outbursts of protests against the status quo. The repeated failures of self-aggrandizing strongmen throughout the second half of the 20th century to modernize their societies dominated for centuries by two conflicting identities, religious and secular, have resulted during the last three years in general uprisings of the peoples.

The latest conflagration of violence, chaos and anarchy in the region has found Syria between the Scylla of an illegitimate regime fearful of its very survival and the Charybdis of unrealistic revolutionary thaumaturgy. Thus in Syria the world is witnessing another chapter in the long-simmering struggle between a ruthless military dictatorship and a hastily organized and atrociously divided opposition that possesses an abundance of political ambition, yet woefully inexperienced in the art of governing, however, firmly convinced that its exclusive vision of the future is perfection itself. Consequently, neither of the two sides is ready for compromise, because they are incapable of understanding the limits within which legitimate governments have to operate, if they do not wish to destroy the country from within. Presently, the main opposition group, the Free Syrian Army, fights against the Assad regime, a host of Islamic organizations, and within itself. Meanwhile, the largest Islamic rebel group, the Islamic State of Iraq and the Levant, has launched several offensives against the Free Syrian Army and a disparate collection of more radical Islamist fighters, such as the Al Nusra Front and Ahrar Asham, among others. Finally, not to be outdone, the Syrian Al Qaeda affiliate has declared every opposition group “evil”, and is collaborating surreptitiously with the Assad regime. As a result, Syria is drowning in blood and civil war.

Viewed in a more global perspective, the tragedy of Syria is closely linked to the current greater crisis in the Middle East. Initially, in the wake of the so-called “Arab Spring” that brought chaotic political changes to Tunisia, Libya and Egypt, and anarchy to Yemen, the Obama administration and its many allies remained prisoners of their own political and ideological bubbles. More specifically, President Obama was paralyzed by his chronic indecisiveness, rooted in his catastrophic incompetence in foreign affairs. Therefore, the simultaneous overthrow of the long-serving dictators in all four countries and the attempts at the destruction of existing institutions caught President Obama by surprise. His surprise turned into confusion, both intellectually and in action, when he realized that popular elections were used by the Muslim Brotherhood and assorted fundamentalist organizations to distort the principle of popular sovereignty. To make matters worse, the majority of the peoples in these affected countries rejected the results of the hastily improvised elections and their political and economic aftermaths. But most importantly, by attempting to establish a religious dictatorship, the Muslim Brotherhood proved its inability to deliver peace and stability to society. Thus, instead of assisting in the transformation of these societies through their revolutions, President Obama perversely only succeeded in bringing about panic, chaos and anarchy.

Presently, both the leaders of the many Middle Eastern countries and the Arab street hate President Obama and openly deride him as an idiot. This general loathing of Mr. Obama has been mixed lately with abject ridicule of his personal and professional background by comedians, belly dancers, intellectuals of varying persuasion, and a broad assortment of religious personalities. Clearly, President Obama’s obsession with his shallow intellectual belief that it is easy to bring about essential changes in societies without basing them on solid and accepted principles is running counter to the realities in the Middle East and beyond.

Thus, the urgent question to be answered is: which are the principles that the United States of America must espouse in order to obtain the peace and stability that the region so desperately needs? The reply to this complex question is non-intervention militarily by Washington, unless truly vital national and international interests justify the use of force. To this general principle an accompanying one must be added: governments supported by public majorities, whether hereditary or representative, deserve political, economic, cultural and military cooperation, as long as they express the will of the nation or the majority of the citizens. Finally, the United States of America must insist that the principle of the rule of law be created and preserved. This requirement, however, cannot be a myth. It can be effective and serve its purpose only if the proper balance between the legislature, executive and judiciary is fully respected. Only then could both states and individuals live in peace and security in the region.

In Syria neither the Assad regime nor any of the opposition groups is the real exponent of the national sentiment. The majority of opinions are unquestionably in favor of restoring peace and normalcy to the country. Were the opposition groups united, public opinion would be undoubtedly on their side. Would the Assad regime represent the majority and respect the right of opposition and freedom of suffrage, the majority would support incontestably the present power structure. The result is a standoff that we have to dread. Left to itself, this standoff could drag on indefinitely, destabilizing the neighboring countries and even the states in North Africa and South-East Asia. Negotiations among the United States of America, Russia, Iran, the Assad regime, and the opposition groups, if lacking those guiding principles, would only delay a peaceful solution and encourage religious fundamentalists and secular radicals alike to embroil their countries in similar violence, chaos and anarchy. Such would be the consequence of President Obama’s incompetence and proverbial dithering.

For these reasons, the negotiations must be aimed at comprehensive pacification of the situation. All the states currently involved in Syria must agree on disarming both the regime and the opposition groups, and refraining from continuing to further arm either side. Ultimately, if it is absolutely needed, an international peacekeeping force should be used to oversee a peaceful transition from the current civil war to a representative government. There could be no doubt that in these complicated and dangerous situations in Syria and throughout the region, a negotiated and enforced armistice and political settlement remain the only practical solution. Some may argue that such a solution is unrealistic. And given the extraordinarily poor leadership provided by the United States and its President, who can say that they are wrong? But that only underscores the need for strong, capable and practical leadership from the United States and the tragic cost when such leadership is absent.

Dr. Miklos K. Radvanyi is the Vice-President of Frontiers of Freedom, a Washington, D.C. based think tank.