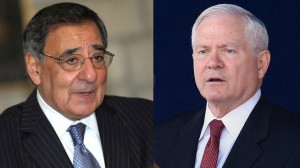 President Barack Obama spoke at the United Nations yesterday. As has become his habit, he speaks without saying much. His is speech added no new substance to the current world problems – Syria, Iran, Egypt, or peace between Palestinians and Israel. And he came off mostly defensive of his own lack of effectiveness.

But in fairness, who can blame him?  It isn’t just the loyal opposition that is criticizing the President’s lack of effective leadership on the national stage or pointing out that his taking every conceivable position on almost every international crisis, is only hurting U.S. credibility on the world stage – it is now both of his former Secretaries of Defense who are criticizing Obama’s failed leadership. That has got to hurt and it will likely leave a mark!

Robert Gates and Leon Panetta have both been critical on the record of Obama’s recent fumbling, mumbling and grumbling on Syria. Gates said, “My bottom line is that I believe that to blow a bunch of stuff up over a couple of days, to underscore or validate a point or a principle, is not a strategy.” Panetta, a life-long liberal Democrat, said, ” “When the President of the United States draws a red line, the credibility of this country is dependent on him backing up his word.”

Both of these two men served in Obama’s cabinet and have strong national-security credentials. Both have respect for Obama, but neither was able to defend Obama’s leadership on important national security issues of late. That is telling.