How Marianne Williamson Was Force-Fed The Red Pill

A rare and special joy is watching a left-winger get red-pilled in real-time, in public, right before all our eyes. This seems to be the case with Marianne Williamson.

By Michael Malice • The Federalist 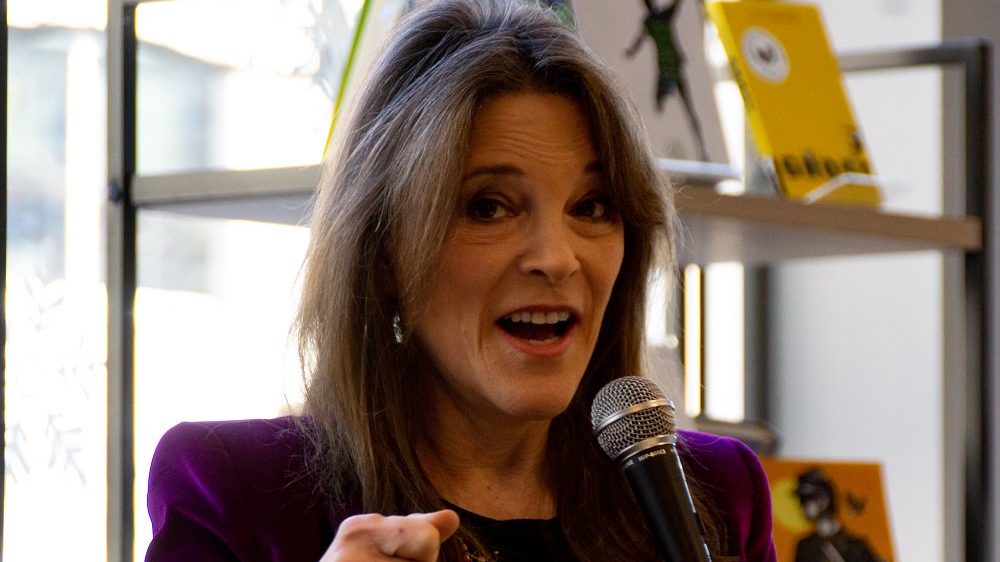 The term “red-pilling” is often bandied about on social media, frequently by people who have no idea what it means—or take it to mean “red” in the sense of Republican red states. The concept comes from the documentary “The Matrix,” and is defined in my book as “demonstrating to someone that what is presented as fact by the corporate press and entertainment industries is only (at best) a shadow of what is real, that this supposed reality is in fact a carefully constructed narrative intentionally designed to keep some very unpleasant people in power and to keep everyone else tame and submissive.”

Given the overwhelmingly hard-left agenda within corporate media, red-pilling far more frequently occurs on the right hand of the political spectrum. Yet there are plenty of red-pilled leftists as well, voice like Glenn Greenwald and Michael Tracey, who have no problem slamming outlets like The New York Times for what can charitably be described as malfeasance.

A rare and special joy is watching a left-winger get red-pilled in real-time, in public, right before all our eyes. This seems to be the case with quixotic Democratic presidential candidate Marianne Williamson.

It’s hard not to like Williamson. She became a social media darling after her debut at the June 27 Democratic debate, where some of her responses seemed like utter non sequiturs.

One can only imagine a jubilant President Williamson slamming down the phone, while in the middle of the night in Wellington a befuddled Prime Minister Ardern stares at the receiver listening to a dial tone: “Hello?…Madame President?…Hello, are you there?…Marianne, was that really you?”

We live in a time where “secular” saints like Greta Thunberg berate us from our televisions, and we are expected to regard the tantrums of hysterical teenagers as not only of interest but as sources of guidance and wisdom: “I should be back in school on the other side of the ocean!” I’m old enough to remember how Willy Wonka handled such Verucas Salt. Yet for every lefty Thunberg, there are many genuine saints among the bleeding hearts of the left, and Williamson appears to be one of those.

A Genuine Concern for Results

Williamson’s “A Politics of Love” was published this past April, and testifies she is a genuinely kind-hearted person interested in bettering lives (or a sociopath who is good at passing). She recounts how one of her students asked her: “Aren’t you just an aging hippie?” and does not seem to shy away from the label. Williamson comes to politics from activism, but an activism based on gathering results rather than social-media attention.

If someone is interested in helping those in need at a local level, a volunteer’s political association falls almost entirely by the wayside. When there are sick people who need food, the questions become “Can you cook?” “Do you have a car to deliver the meals?” “Can you call donors to raise money?” not “Do you think gun laws are inherently unconstitutional?” or “Do you think overseas warmongering lead to blowback here?”

Williamson’s book begins memorializing life and death in the time of AIDS, much like Cynthia Carr did so well in “Fire in the Belly,” her masterpiece biography of artist and activist David Wojnarowicz (1954-92). “I began lecturing on A Course in Miracles, a book of spiritual psychology, in 1983,” she writes. “I remember saying over and over, at lecture after lecture and support group after support group, ‘There doesn’t have to be a cure for AIDS for it to become a chronic, manageable condition. There isn’t a cure for diabetes, but it’s a manageable condition!’ We survived on that hope, articulating it over and over with tears in our eyes.”

Although Williamson constantly mentions “miracles” in her books and interviews, having realistic hope can be wonderfully inspirational. Telling a homeless person he can get to a mansion is an absurdity. Telling him he can get to an apartment with four housemates is a possibility.

During the debates Williamson failed to mention that she founded Project Angel Food 30 years ago. It’s an organization dedicated to feeding, free of charge, people living with AIDS when it was a far more serious and stigmatized condition than it is today. Her reward for this has been animus and vitriol from those who should ostensibly on her side.

We Don’t Care What You’ve Done

The uniquely repellent Samantha “there is no smug liberal problem” Bee publicly called on Williamson to end her presidential campaign. “I am so loving your vibe,” Bee sneered, “so I wanted to invite you over to my show for a very chill, very serious dropout campaign dropout party.”

Early last week, Rep. Tulsi Gabbard dropped what was essentially a red pill on the Democratic field, explicitly saying, “The 2016 Democratic primary election was rigged by the DNC and their partners in the corporate media against Bernie Sanders.” Not biased, but rigged. Not “Fox News,” but “corporate media.” Gabbard claimed to be considering boycotting the debate.

Williamson—who did not meet the debate criteria—agreed with Gabbard’s assessment. “I have great respect for Tulsi for saying such inconvenient truth,” Williamson tweeted. “She is absolutely correct.”