Freedom Centers Constitutional and Political Freedom From Woke to Broke ...

From Woke to Broke

Column: The political contradictions of progressivism 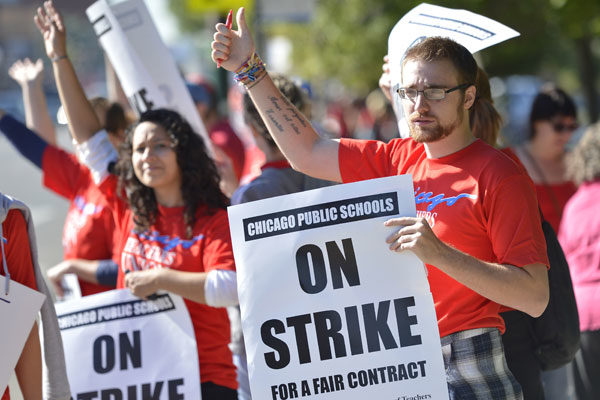 “The fact is there is no more money. Period,” says Chicago mayor Lori Lightfoot.

She’s talking about the teachers’ strike that has paralyzed her city’s public schools—enrollment 360,000—for the past week. The public employee union is demanding more: more money for salaries (only eight states pay teachers more than Illinois), more support staff (Illinois ranks first in spending on administrators), more teachers per student. Their cause has attracted national attention. Elizabeth Warren joined the picket line.

Which is ironic. Lightfoot is not some stingy Republican. Nor is she a centrist Democrat like her predecessor Rahm Emanuel. She’s as progressive as you can get. But she now finds herself in the same position as many of her political brethren: facing criticism for failing to reconcile the contradictions in the left’s agenda.

Lightfoot has discovered that there is no limit to the appetite of the constituencies generated by government spending. She has learned that the special interests bargaining for higher benefits also desire policies that make such benefits unattainable. I hope she’s taking notes.

Chicago Public Schools has run a deficit for the past seven years. Why? Pensions granted to earlier generations of teachers are expensive. And the cost is growing. A quarter of the school budget is devoted to benefits—money that can’t be spent on classrooms, facilities, and instruction. Expect that number to rise as America goes gray and the bill comes due for the promises we made to ourselves.

The federal government can put Social Security and Medicare on the credit card for as long as demand for U.S. Treasuries is high. States and municipalities don’t have that luxury. There is an upper bound to what even the most progressive mayors and governors can grant the lobbies that mobilize voters for their campaigns. But it’s a glass ceiling. Public sector unions are eager to break it.

Nor does being woke protect you. It’s impossible to appease fully the groups fighting to claim resources and honor. They often won’t take yes for an answer. GM might tout to investors the fact that it is “leading in gender equality.” That didn’t stop the UAW from striking.

Public policy inspired by the ethic of social justice inflames the tension between progressive leaders and the voting public. Andrew Cuomo might sympathize with Mayor Lightfoot. His fealty to environmental groups has backed him into a corner. Banning fracking and canceling pipelines hasn’t just denied New York revenues, jobs, and lower energy bills. It also led energy supplier National Grid to cancel gas hookups in Long Island. Cuomo had to retaliate before the company restored service. Want to be a progressive? Claim credit for resolving a crisis of your own making after threatening to unleash state power on private actors responding to price signals. Cuomo makes it look easy.

Gavin Newsom also has been struggling to reduce the conflict between the imperatives of the new progressivism and the quality of life of everyday people. He has his hands full. Rising numbers of homeless have led to a breakdown of public order in areas of Los Angeles and San Francisco. Land-use regulations have restricted the supply of housing, leading to high prices and shortages, and Newsom’s answer is statewide rent control that will make things worse. California’s budget depends so heavily on revenues from the wealthy that it might not recover from another out-migration like the one the state experienced after a 2012 tax hike.

Pacific Gas & Electric is a case study in the progressive self-own. The state-regulated utility spent years deferring maintenance while it invested in renewable energy and promoted the ideology of diversity, equity, and inclusion. Among the consequences of its neglect were terrible wildfires that devastated communities. The ensuing legal bills drove PG&E into bankruptcy. It says it’s been forced to engage in “de-energization”: purposeful mass blackouts to prevent further damage and legal action. In early October more than two million people were left in the dark. No house, no power, no prospects—welcome to the California Republic.

The contradictions of progressivism generate crises of affordability and governance. But the political class suffers few consequences. Chicago, New York, and California remain Democratic strongholds. What scattered opposition exists is internal to the political machine. On rare occasions parts of the coalition splinter from the whole and are able to defeat radical measures. Think of Bill de Blasio’s stalled plans to cancel entrance exams for New York City’s magnet schools. For the most part, though, the Democrats’ hold on power continues. It’s one monopoly progressives don’t seem to mind.

Are the voters in these communities merely complacent? Are they so content with the patchwork of benefits and status the jerry-rigged welfare state provides that they tolerate dysfunction? Or is the partisan alternative so appalling they won’t even consider it?

Questions worth pondering as progressives prepare to scale up their model nationwide. Who knows? One day, President Warren might be on the other side of that picket line.