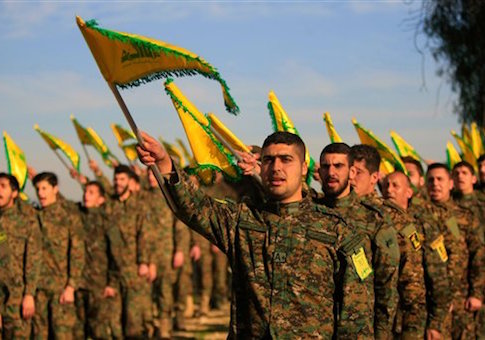 Hezbollah fighters hold flags as they attend a memorial / AP

Iranian leaders publicly broke ranks this week with major Arab Gulf nations in a series of statements criticizing these regional powers for formally designating Hezbollah as a terrorist organization.

The GCC joins the United States, Israel, Canada, and a host of other nations in labeling Hezbollah a terrorist organization. These nations, including Saudi Arabia, have already taken steps to blacklist organizations and individuals associated with Hezbollah.

The decision by the coalition of Arab states to go after Hezbollah has sparked outrage in Iranian government, which is now claiming that “Zionists” secretly orchestrated the GCC’s effort.

Regional experts view Iran’s pushback as a sign that Tehran’s ongoing support for extremist groups has made it a pariah among other Arab nations, which have expressed concern Iran will spend the billions of dollars it received as part of the recent nuclear agreement to fund Hezbollah’s terror activities.

“No doubt the move was made upon an order by the Zionists and the sworn enemies of Islam and Great Prophet Mohammad,” said Major Gen. Hassan Firouzabadi, the Iranian Armed Forces chief of staff, according to Iran’s state-controlled press.

Iranian leaders vowed to continue its support for Hezbollah, which is responsible for killing Israelis and Americans in terror attacks.

“Despite efforts by the House of Saud [Saudi Arabia] and its regional and trans-regional allies, Hezbollah’s deep-seated position will remain intact,” Firouzabadi said. “It will not shift the balance of power in the region. It will not help the Zionists extend their grip on the occupied Palestinian territories.”

“The resistance movement of Hezbollah in Lebanon protects the integrity of Arabs and Muslims against the Zionist regime,” Larijani said Monday.

Iran’s foreign ministry also took aim at the GCC, specifically Saudi Arabia, which has had poor relations with Iran since its embassy in Tehran was burned down in January. Jaberi Ansari, the spokesman for Iran’s foreign ministry, accused the Arab states of aligning with “the occupiers of Palestine.”

“Certain Arab countries are against the Hezbollah resistance movement,” Ansari said. “The movement represents the efforts and ideals of Muslim nations for independence, freedom, justice, and integrity. Hezbollah stands against the Israeli oppression, occupation, racism, and terrorism.”

“Those who are behind the move are knowingly or unknowingly undermining the interests of the Muslim nations,” Ansari claimed.

Regional experts described the verbal conflict between Iran and the GCC as a sign that Hezbollah is becoming increasingly toxic on the international stage.

“It’s getting harder for Iran to defend Hezbollah on the world stage,” Jonathan Schanzer, a former terrorism finance analyst at the U.S. Treasury Department, told the Washington Free Beacon. “The United States, Israel, Canada, France, Saudi Arabia, Bahrain, UAE, Qatar, Kuwait, the Netherlands, New Zealand, the UK, the EU and Australia have all designated the group, in some form, as a terrorist organization—and it’s increasingly clear that their concerns have increasingly less to do with Hezbollah’s terrorist activities against Israel, and more to do with the group’s global footprint.”

The nuclear deal helped to fuel the GCC’s designation of Hezbollah, according to Schanzer, who serves as vice president of research at the Foundation for Defense of Democracies.

“Ironically, had Iran not signed the nuclear deal, it’s unclear whether the recent terrorist designations would have taken place,” Schanzer said. “But with Iran set to receive $100 billion in sanctions relief, one major concern is that Hezbollah will receive a significant portion of those funds for the purpose of terrorist attacks and other activities that would further destabilize the Middle East.”

“With Iran no longer under sanctions, the world is more alarmed about the activities of this Iranian proxy than ever before,” he said.

Hezbollah leader Hassan Nasrallah also slammed the GCC over the weekend, saying in a video message that Saudi Arabia and its allies in the coalition are losing credibility.