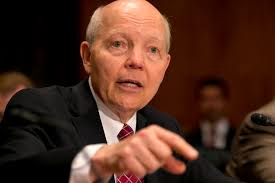 The IRS now says it has recovered a hard drive belonging to a former top employee, months after the agency admitted it had erased the data despite the existence of a preservation order.

Earlier this year, the IRS quietly announced it had erased this hard drive, despite a preservation order borne from a Freedom of Information Act (FOIA) request.

Given the constant feet dragging and changing stories, it is likely the IRS would never have recovered this hard drive without pressure from Congressional investigators.

While this story again proves the ineptitude of the IRS, of bigger concern to taxpayers should be the agency’s decision to hire an elite law firm to perform audits. There is no reason the agency should be hiring costly outside counsel that has zero experience protecting sensitive, confidential taxpayer data.

Unfortunately, this is exactly what happened when the agency hired elite law firm Quinn Emanuel under an initial $2.2 million contract despite the firm having never even conducted an audit.

Not only is this wasteful, it is also unnecessary. The IRS already has access to around 40,000 employees responsible for enforcement. The IRS can also turn to the office of Chief Counsel or a Department of Justice attorney, both of which have the expertise to conduct this kind of work, without risking sensitive information.

This hiring decision was described as “troubling” by a federal judge and prompted a probe by Senate Finance Committee Chairman Orrin Hatch (R-Utah).

Ultimately, while this decision appears to be reckless and unnecessary, it appears not to break any laws.

But regardless, the IRS should not be allowed to spend taxpayer resources on an unqualified trial law firm given the agencies record failing to safeguard taxpayer data and using its power to target taxpayers for their political beliefs.