Freedom Centers Constitutional and Political Freedom No, President Obama, It’s Not Easier To Buy A Gl ...

No, President Obama, It’s Not Easier To Buy A Glock Than A Book

According to Pew Research Center, 92 percent of teens use the Internet every day. 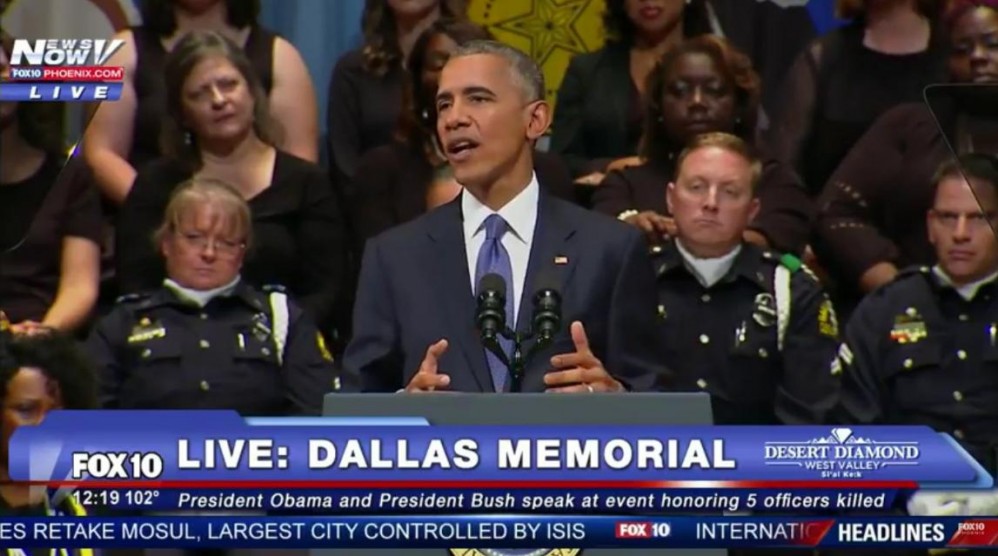 During his speech at the memorial service in Dallas for murdered police officers, President Barack Obama lamented that his words have little power to effect change, then proceeded to peddle blatant, easily refutable lies about guns.

One reason for that inadequacy may be that he says things he knows aren’t true. Over the weekend, Obama said, “I think it’s very hard to untangle the motives of this shooter.” Given that the shooter himself told police that he “wanted to kill white people, especially white officers,” there doesn’t seem to be much left to untangle.

Another reason for the inadequacy of the president’s words may be that he so often says things that other people know aren’t true. Take, for example, a new gun claim that he for some reason decided to trot out at a memorial service for murdered police officers on Tuesday:

Obama: “It’s easier for a teenager to get his hands on a Glock than a computer…or even a book!” pic.twitter.com/tTQJHLz5kc

Set aside for the moment the question of whether this kind of political speechifying is appropriate for a solemn memorial service, and just focus on the assertion itself: “It’s easier for a teenager to get his hands on a Glock than a computer…or even a book.”

Is there anyone in America, other than its commander-in-chief, who believes for a second that this even remotely approximates the truth? It’s not just false. It’s laughably false.

For starters, it’s against federal law for anyone under the age of 18 to legally purchase or possess a handgun or handgun ammunition (Glock is the manufacturer of a popular line of handguns, not a synonym for handgun). It’s also against federal law for anyone to sell or deliver a handgun to anyone the seller reasonably believes is under the age of 18. As far as I know, neither computers nor books are illegal. And judging by the number of teenagers I see walking around with their faces glued to their smartphones, they don’t seem to have a particularly difficult time getting hold of a computer.

Internet use is a near ‘constant’ for some teens

Does Barack Obama believe that more than 92 percent of American teenagers illegally possess and shoot handguns each day? Because that’s what would need to be happening in order for his statement to be true. As of 2014, roughly one-third of U.S. households had guns in them. Are we to believe that the incidence of handgun usage among teenagers is three times higher than the ownership rate of all households in the U.S.? Because that would also need to be true for his statement to be accurate. Is Obama really asserting that handgun access among teenagers, who are prohibited from possessing them by federal law, exceeds that of actual adults who can legally purchase and possess pistols?

In addition to being completely illegal for anyone under the age of 18, handguns are also pretty expensive, especially compared to things like books, and cost and accessibility are generally inversely related. Free stuff is easy to access, while expensive stuff is not. The Glock 17, a 9mm handgun that according to its manufacturer is the most widely used law enforcement pistol in the world, will cost you upwards of $500. A book at the local library will cost a child approximately nothing. Public schools literally hand books to children when they enroll in school each year. And if for some reason school isn’t really your thing, there are these places called libraries that allow you to walk out with books for free whenever you want. In Barack Obama’s hometown of Chicago, there 80 different public library locations scattered throughout the city. In spite of my extensive Google skills, I was unable to locate any Chicago-area kiosks that dispense handguns to children free of charge, nor was I able to find any government institutions that deliver handguns to children when they walk in the door in August after summer vacation ends.

The president’s claim that teenagers can go out and grab Glocks more easily than they can find books or computers isn’t just false. It’s a pathetic attempt by an ineffective, lame duck president to hijack a service of mourning for his own unpopular political agenda.

The Dallas police officer memorial service isn’t the only place Obama has workshopped this kind of gun lie. Last year, the president declared that it is easier to buy a handgun than it is to buy a vegetable (spoiler alert: it’s not). The lesson the president learned from that embarrassing attempt to lie about guns was apparently to make the lie even more brazen. Vegetables? Those cost money. Why not compare guns to things like books that anyone with a pulse can get for free? That’s the ticket!

Instead of taking a moment to thoughtfully consider why his words are so useless, the president instead sought to cheapen them even more by peddling obvious lies. And he chose to do so not at a political event or campaign rally, but at a solemn event meant to honor the lives of those who got up every morning in order to protect others. President Obama is right: his words are meaningless. If he wants people to take him seriously for the next six months, maybe he should start using them a little more sparingly and starting telling the truth a little more often.