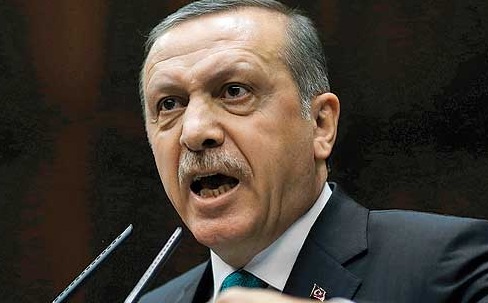 Speaking generally on the occasion of the Eid al-Adha on August 20, 2018, Turkish President Recep Tayyip Erdogan declared that the attack on his country’s economy is like an attack on “our call to prayer and our flag.” Proving that he is more beholden to empty slogans than to realities, he continued: “The goal is the same. The goal is to bring to heel Turkey and the Turkish nation. To hold it captive. We are a nation that prefers to be shot in the neck rather than to be chained by the neck.” Although the addressee was not identified, but everybody in Turkey and beyond knew that he spoke directly to President Trump.

To the Turkish people’s misfortune President Erdogan does not possess the leadership qualities of Mustafa Kemal Ataturk. Misguidedly, President Erdogan believes that political Islam is a global strategy, encompassing politics, economics, culture, and humanity. For this reason, he lacks clarity of thought, balanced intellect, self control, tolerance fortified by universal humanity, and respect for other cultures and religions. Since 2011, both his domestic and foreign policies have been unmitigated disasters. His sickening sectarianism at home concerning the sizable Kurdish minority most likely will perpetuate a situation resembling more a civil war than peace and stability. His handling of the economy in the last four years has been an utter failure. His country’s financial policies have only resulted in more corruption, blatant nepotism, and the staggering devaluation of the Turkish Lira. Abroad, his megalomaniac desire to assume the role of the Ottoman Sultans of the past has led to spectacular humiliations in Tunisia, Libya, Egypt, Syria, Iraq, Qatar, and even in Lebanon. His flirting with the Russian bear and the Iranian lion will surely end the same way as such past ad hoc actions ended, namely, in diplomatic enmity and even open hostility.

Yet, President Erdogan’s most erroneous policy initiative is his irrational feud with the United States of America. Using the attempted military coup d’etat of July 15, 2016, he has accused his former mentor and political ally Fethullah Gulen with masterminding his unsuccessful overthrow. After demanding in vain his extradition from the United States government, he has proceeded to undermine Turkey’s relationship with Washington specifically, and NATO generally. His insistence on buying the Russian S-400 missile defense system is a direct challenge to the integrity of NATO and the stability as well as the peace of the European continent. The affair of Andrew Brunson, an American Christian pastor living in Izmir, a city on Turkey’s Aegean coast near some of the sites of Christianity’s earliest communities, only added to the artificial crisis atmosphere that President Erdogan has intentionally created. Following several unsuccessful attempts at Andrew Brunson’s release, President Trump has slapped sanctions and tariffs on Turkey that has pushed the Turkish currency to record lows.

Cynically mixing the cases of two innocent men, namely Gulen and Brunson, to his desire to eliminate his most dangerous political opponent, President Erdogan has proven that he does not understand the United States, does not know Europe, and the limits within which a member state of NATO should confine itself, if it does not want to commit national suicide. Even more regrettable is the fact that President Erdogan does not comprehend the mortal danger inherent in his newly erected presidential despotism. Foolishly, he tries to snuff out the political firestorm at home by threatening to set Europe and the Middle East ablaze by his ad hoc alliance with Moscow and the acquisitions of Russian military hardwares.

Clearly, President Erdogan is waging self-defeating wars on several fronts. In addition to his irresponsible foreign adventures, his global terror at home has resulted in the destruction of government institutions, including the judiciary, that signals the beginning of the end to his Islamic fundamentalist and sectarian regime. Today, half of his compatriots hate him and will never accept his illegitimate grab of absolute powers. Adding insult to injury, the more he feels threatened the more authoritarian he becomes. The rest of the world must realize that the Republic of Turkey is Islamic despotism par excellence enveloped in the toxic atmosphere of boundless and mutual fear.

The chances that appeasement on the part of the United States and the European Union could lead to any reversal are practically zero. The differences in values, particularly on the issues of democracy, individual and religious freedoms, are presently unbridgeable. Turkey is on the verge of becoming a failed state. For Turkey mirrors the deep political and socio economic crises of all Islamic fundamentalist states that have repeatedly proven to be incapable of building and maintaining a separate secular political culture to sustain modern and inclusive states.

Meanwhile, the United States is flourishing and the European Union is also doing well. Under these circumstances, it is advisable to play for time and manage the conflict with President Erdogan carefully, avoiding further deterioration in hostility. The enduring turmoil in the Middle East and President Erdogan’s behavior will certainly work to the advantage of Washington and Brussels. Such a strategy will reduce the pressure for acceding to future unrealistic Turkish demands. In this manner, with time on the United States’ and the European Union’s side, NATO will definitely weather President Erdogan’s disruptive and provocative challenges.