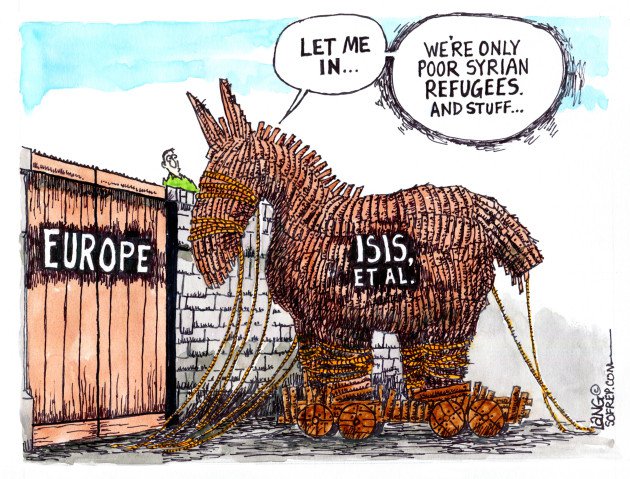 Islamic State, also referred to as IS and ISIS, is believed to be actively smuggling deadly gunmen across the sparsely-guarded 565-mile Turkish border and on to richer European nations, he revealed.

They are following the well-trodden route taken by refugees and migrants fleeing, travelling across the border of Turkey then on boats across to Greece and through Europe.

There are now more than 4,000 covert ISIS gunmen “ready” across the European Union, he claimed.

The operative said the undercover infiltration was the beginning of a larger plot to carry out revenge attacks in the West in retaliation for the US-led coalition airstrikes.

He said: “If someone attacks me then for sure I will attack them back.”

Refugees were applauded as they arrived in Germany this weekend having made the journey through Hungary and Austria.

The lethal ISIS gunmen use local smugglers to blend in and travel amongst a huge tide of illegal migrants flooding Europe.

More than 1.5million refugees have fled into Turkey alone – desperate to escape the bloodshed in Syria.

From Turkish port cities like Izmir and Mersin, thousands of refugees venture across the Mediterranean aiming for Italy, he said.

Then the majority make for more welcoming nations like Sweden and Germany, turning themselves over to authorities and appealing for asylum.

Two Turkish refugee-smugglers backed up the claims made by the ISIS Syrian operative.

One admitted to helping more than ten trained ISIS rebels infiltrate Europe under the guise of asylum seekers.

He said: “I’m sending some fighters who want to go and visit their families.

“Others just go to Europe to be ready.”

The Syrian operative, a former member of his nation’s security forces, said ISIS had ambitious plans ahead.

He said: “It’s our dream that there should be a caliphate not only in Syria but in all the world,” he said “and we will have it soon, God willing.”

The operative agreed to a meeting at the urging of a former Free Syrian Army gunman who fought alongside him in the war.

The Syrian said he had been granted permission to attend the meeting by his superior in ISIS — a radical referred to by members of the group as an “emir.”

During the meeting, the operative said he believed future attacks would only target Western governments – not civilians.

Although details of terror plot are something over which he has little control, he claims.

The revelation comes after a spokesperson for Islamic State earlier this year called on Muslims in the West to carry out terror attacks.

The informant said he had smuggled people in amongst migrants
The jihadist told Western followers if they had the opportunity to “shed a drop of blood” in Western countries – then they should do so.

He said: “We repeat our call to Muslims in Europe, the infidel West, and everywhere to target the Crusaders in their home countries and wherever they find them.

“We will be enemies, in front of God, to any Muslim who can shed a drop of blood of a Crusader and abstains from doing that with a bomb, bullet, knife, car, rock or even a kick or a punch.”

He pointed out that since Europe accepts few refugees through legal channels, the demand for smuggling has increased.

“Illegal migration has been an important issue and Turkey is effectively fighting against it,” the official, who declined to be named, confirmed.

“Of course the most effective way to put an end to all these problems would be immediate action by the international community to solve the Syrian conflict.”

When asked about the smuggling of Islamic State operatives in boats of innocent refugees, the anonymous official said his government was unaware of the plot.

“We do not have that particular intelligence,” he said.

“Turkey has been taking very tight measures against [ISIS] with all the capabilities the government has.”