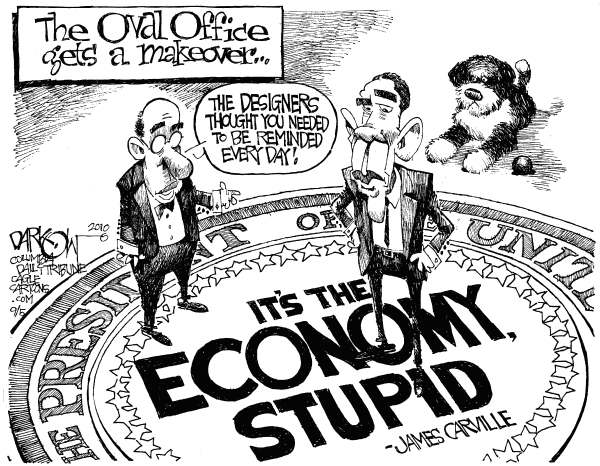 always blames the current economy on hispredecessor, President George W. Bush. In 2009, this was perhaps a fair question. However, it turns out even then it was revisionist history of why the economy stalled. Bush’s tax cuts didn’t create the problem. The War in Iraq didn’t cause the melt-down.

As you will recall, the financial crisis was caused by the housing bubble which was the fault of Congress — of which Barack Obama was a member — and Fannie Mae and Freddie Mac and mortgage packages and other regulators.

The truth is when a Bush administration official tried to warn Congress of the risks associated with irresponsible lending policies, the Bush Administration was accused of being motivated by racism and not wanting the poor to own homes by the Democrats. So nothing changed, the insanity continued, and several years later, there was a financial crisis. The truth is, Obama as a member of Congress receiving more campaign cash from the very mortgage giants who helped cause the meltdown than all but one other Senator, should have not be bought off.

In the Wall Street Journal, Daniel Henninger identifies at least a big piece of the truth:

“It’s true, as Mr. Obama argues, that the numbers of unemployed Americans began to rise abruptly after September 2008 when the financial crisis erupted, and that the president’s name then was George W. Bush. What Mr. Obama won’t say is that the financial crisis resulted from the implosion of a housing market transformed into a toxic landfill by Congress, regulators, Fannie, Freddie and mortgage packagers. The Bush presidency was a bystander.

“Also left unsaid by Mr. Obama but free for the telling by Mr. Romney is that as the U.S. unemployment rate hit 9.5% in June 2009 and a shocked public was looking for a response, the new president introduced the Affordable Care Act. Whatever else one may say about ObamaCare, it has nothing directly to do with U.S. employment. For the next nine months, as unemployment ran between 9.5% and 10%, Congress at Mr. Obama’s insistence worked on his health-care legislation. When Mr. Obama signed the bill into law in March 2010, the unemployment rate was 9.8%. If an opponent wanted to describe this in partisan terms, he might say that the president legislated an entitlement dream while the economy burned….

“In August 2011, Standard & Poor’s released its historic downgrade of U.S. debt. It’s hard to remember who was president then, but the unemployment rate was still 9.1%.

“U.S. unemployment is now flatlined at 8%, at 17% for young workers and at infinity for everyone who has given up looking for a job during the nearly four years Mr. X has been president.

“This isn’t George Bush’s economy. It isn’t the windmill economy. It’s the economy we’ve got right now. With luck, someone in Denver next week will think it’s worth talking about.”

Mr. Daniel Henninger’s full column can be found at the Wall Street Journal.