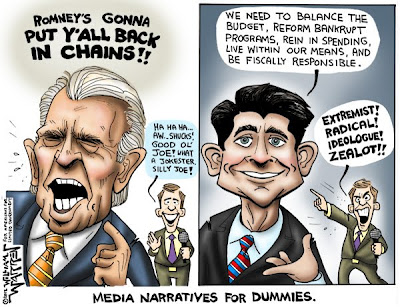 The Democratic Party is a machine for inciting grievances in order to consolidate its power. The Republican Party is also just such a machine, but poorly run. Incompetence and stupidity are its only saving graces. Journalists who cast a hostile and suspicious eye equally on both would be…  well, they would be journalists, wouldn’t they? How can you suspect the stratagems of those who seek power and go far wrong?

Instead, what we have in our news media is a cabal of over-educated but under-smart elites under the hilarious impression that one power-hungry party is out for the good of mankind and the other staunchly opposed. It’s such a stupid thing to think — such a blitheringly naive proposition — that reacting to them with outrage seems almost unkind, like slapping a child for believing in Santa Claus.

And yet one feels one has to say something. Take a look at the mighty John Nolte’s timeline of journalistic lies about the Zimmerman-Martin affair. From CNN falsely attributing a racial slur to Zimmerman, to NBC’s actionable editing of audio to make Zimmerman seem racist, to the New York Times‘ invention of a unique racial category (white Hispanic) useful for nothing but the ginning up of public hostility, there is a childlike insistence that the world be as Democrats claim it is, rather than as it really is, a willing suspension of disbelief in a political distortion. It really is so infantile that it would be kind of sweet and silly if it weren’t so dangerous. I mean, it’s all fun and games until somebody puts out an eye — or burns down a city.

This is not a political problem, it’s a cultural one. Leftist journalists trained by leftist professors and encouraged by leftist entertainers to slavishly serve the aims of leftist politicians. This circle will not be broken by the cowards and hapless fools on the other side of the political aisle, but only by new educators and new journalists and new culture makers who refuse to conform, rebels who respond to the ceaseless barrage of cynical and racist distortions with facts and moral truths. They can be liberals or conservatives as long as they’re honest. They just can’t be liars and clowns as most journalists seem to be today.

It better happen fast — it better happen now — because jurors like the ones in the Zimmerman trial, jurors who serve the truth above all, will be ever harder to find in a culture shaped by the current set of miscreants.

This has been a shameful affair and America’s newsrooms — and the people who create and encourage them — are to blame.

Andrew Klavan write for PJ Media where this article was originally published.