Jacques Audibert reported to have said congressional rejection would be ‘helpful’ 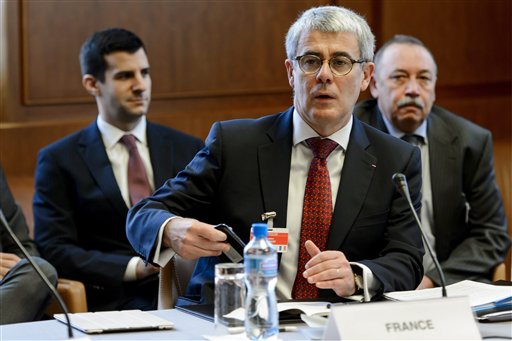 Two more lawmakers stepped forward on Friday to confirm recent comments by senior French national security official Jacques Audibert, who reportedly told a delegation of lawmakers in a recent meeting that a congressional rejection of the recent Iranian nuclear deal could be “helpful.”

Audibert, a senior diplomatic adviser to President Francois Hollande, is said to have told Reps. Loretta Sanchez (D., Calif.) and Mike Turner (R., Ohio) in a recent meeting that congressional disapproval of the deal could be beneficial and help world powers secure more favorable terms.

The comments, which were first reported Thursday by Bloomberg, are directly at odds with recent remarks by Secretary of State John Kerry, who has argued that a rejection of the deal would destroy international sanctions on Tehran and push it to pursue nuclear weapons more aggressively.

“We participated in the meeting and can confirm that Congresswoman Sanchez’s account of the meeting is accurate. We disagree with recent claims that seek to refute her account,” the lawmakers said in a statement provided to the Free Beacon.

“I was in the July 17 meeting of Codel Turner with French Diplomatic Advisor Jacques Audibert, and the July 30 Bloomberg article on the meeting is completely inaccurate,” U.S. Ambassador to France and Monaco Jane Hartley said in a statement released by the embassy. “Mr. Audibert expressed France’s strong support for the JCPOA, never said there would be a better deal if Congress rejected it, and emphasized that it was a robust and hard-won accord.”

The initial report of Audibert’s comments prompted a quick pushback by the French Embassy, which was pressed to do so at the behest of White House officials, who were reportedly panicked over the report, according to sources apprised of the situation.

Audibert “basically said, if Congress votes this down, there will be some saber-rattling and some chaos for a year or two, but in the end nothing will change and Iran will come back to the table to negotiate again and that would be to our advantage,” Sanchez told Bloomberg. “He thought if the Congress voted it down, that we could get a better deal.”

The comments “directly disputed Kerry’s claim that a congressional rejection of the Iran deal would result in the worst of all worlds, the collapse of sanctions and Iran racing to the bomb without restrictions,” according to Bloomberg.

The French Embassy’s Twitter account issued a statement by Audibert, who also distanced himself from the report.

“During the meeting with the members of the US Congress on the 17th of July, I never said or suggested that a no vote from the Congress on the JCPOA might be helpful or lead to a better deal,” Audibert said in the statement. “I insisted repeatedly on the fact that the deal itself was the best possible.”

Eric Schultz, White House press secretary, also took to Twitter to push back against the report.

However, Audibert walked back his initial rejection of the report on Friday in an interview with French-language press.

When asked by European officials what would happen if Congress were to reject the deal, Audibert “told them that in my opinion, no European company would take the risk of going to do business in Iran, since it risks being subjected to US sanctions, as was recently the case of a large French bank. It’s obvious,” French press reported.

Audibert’s apparent support for a congressional no vote on the deal is said to have swayed some lawmakers to oppose the agreement.

While Kerry and senior Obama administration officials claim that congressional refusal to lift sanctions on Iran would collapse sanctions and push international entities to do business in Iran, Audibert disagrees.

Sanchez told Bloomberg that she asked the French official “specifically what the Europeans would do, and his comment was that the way the U.S. sanctions are set in, he didn’t see an entity or a country going against them, that the risk was too high.”