Left Amps Up Justifications For Violence Against Their Political Opponents

The left's new extremism condones assaulting conservatives in public. Antifa's attack on a journalist is yet another example that our norms have changed.

By Ellie Bufkin • the Federalist 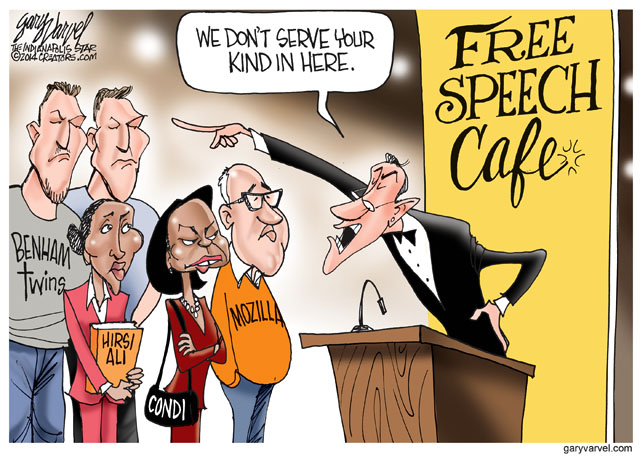 Over the weekend, the Washington Post published an opinion article written by Stephanie Wilkinson, the owner of Red Hen restaurant in Lexington, Virginia. Wilkinson famously kicked out White House Press Secretary Sarah Huckabee Sanders and her family last June over what Wilkinson felt was a moral obligation to stand up to the Trump administration. The restaurant owner not only ejected Sanders, but followed her into another restaurant to continue the harassment.

Wilkinson doubled down on her actions in her Washington Post article, claiming that all restaurants and businesses have a moral obligation to prevent dissenters from participating in public life because, as she said, “this isn’t about politics. It’s about values, and accountability to values, in business.”

Her position, like many others, is that President Trump is akin to a murderous dictator, that he is an unabashed anti-LGBT racist, despite no evidence to support this. She has subscribed to the rules and followed them to the letter, so naturally, anyone who shares any values with the conservative president is the enemy. In closing, she suggests:

When the day comes that the world feels returned to its normal axis, I expect we’ll see fewer highly charged encounters making headlines. In the meantime, the new rules apply. If you’re directly complicit in spreading hate or perpetuating suffering, maybe you should consider dining at home.

Hunt Civil Servants Down and Attack Them

The New York Times ran a companion article this weekend in their opinion section that suggested civilians should expose those attempting to address the humanitarian crisis at the border. Author Katie Cronin-Furman, an “assistant professor for human rights,” didn’t mean the human smugglers and the scores of people exploiting children to gain access to the United States, but the government employees of Customs and Border Patrol (CBP) and Immigration and Customs Enforcement (ICE). She cited the cash-starved agencies as being solely responsible for the deplorable conditions at the detention facilities.

The author further suggests that the best way to combat the crisis at the border, which was repeatedly denied by the left until very recently, was to obtain the names and identities of government agents and shame them publicly in their home towns and churches. She said, “Immigration lawyers have agent names; journalists reporting at the border have names, photos and even videos. These agents’ actions should be publicized, particularly in their home communities.”

Cronin-Furman further suggested that attorneys should think twice about representing these government agents: “the American Bar Association should signal that anyone who defends the border patrol’s mistreatment of children will not be considered a member in good standing of the legal profession.” Mind you, even serial killers, rapists, terrorists, and pedophiles have the right to legal representation in this country. But apparently U.S. government employees attempting to deal with a crisis our Congress refuses to address do not.

Spit In the President’s Son’s Face

These are the new rules of civility. Last week, a server at The Aviary, an upscale cocktail lounge in Chicago, spit in the face of the president’s son, Eric. Chicago Mayor Lori Lightfoot condemned this, as did the owners of The Aviary, but public support for the server was astronomic. A fundraising page for the employee (later determined to be fake) raised more than $5,000 in less than two days.

Carlos Maza, an employee of liberal outlet Vox, made headlines in June for causing YouTube to yank ad revenue from conservative Steven Crowder. He claimed Crowder was guilty of “hate speech” and harassment. Crowder frequently poked fun at Maza and his extremely leftist views on his show, “Louder with Crowder.” Just a month earlier, however, Maza suggested attacking all conservatives by hurling drinks at them. In a tweet, he said, “Milkshake them all.  Humiliate them at every turn. Make them dread public organizing.”

Vice published an article in May titled, “How to Make the Perfect Milkshake for Throwing at Fascists,” which encouraged readers to hurl the beverages at any conservative they recognize in public. Food blog Eater doubled down on Vice’s suggestion with a tongue-in-cheek piece about the best throwing food for “fighting fascism.”

The Boston Globe published an article in April that suggested food service workers should tamper with the food of conservatives, including of Bill Kristol, who has never supported the Trump administration in any way. The Boston Globe later removed their article after severe backlash. Throwing any object at a person is considered assault.

If You’re Not a Leftist, You’re Fair Game for Assault

In the past year, nearly a dozen members of the Trump administration and conservative lawmakers have been chased out of restaurants and pelted with milkshakes, not for causing civil disruption, but simply for being in public. The new rules being touted so strongly by the media aren’t limited to lawmakers and cabinet members any longer, however. Milkshakes, harassment, and public shaming are now excused penalties for anyone who doesn’t fully subscribe to their ideology.

In that vein, any journalist critical of policies now considered by the left to be nothing short of moral imperatives would also be unwelcome in the public square and therefore a complicit “fascist.” After the shocking moment in Thursday night’s Democratic debate when all ten candidates raised their hands in favor of unlimited taxpayer-provided health care for illegal immigrants, noted Trump critic Andrew Sullivan suggested their extreme position could cost them the election. He was quickly labeled on social media as a Trump apologist and racist.

Then there was the attack on journalist Andy Ngo this weekend in Portland, Oregon, by Rose City Antifa. While the extreme left continues to tout their new rules of civility as being merely “peaceful protests,” Ngo was targeted and brutally attacked by black-mask-wearing members of an extremist organization. As Antifa pelted Ngo with fists, milkshakes, and other objects, stealing his camera and phone as he lay bleeding on the ground, police stood idly by under directives of a very liberal mayor in a very liberal city. Just three arrests were made. Ngo was hospitalized with a brain bleed.

Ngo, who is openly gay, is an editor for Quillette, a magazine that stays in the center politically but often publishes articles that fall outside of the “correct way” of thinking as laid out by extreme progressives. The new rules seem to ban any contradicting thought from public life, and if peaceful protesting doesn’t make people fall in line, then more forceful, violent methods now have received the green light.

The Middle Has Turned Into a DMZ

The political line in the sand between the left and right has evolved into a fracture so deep and wide that the idea of crossing it in either direction has become almost unthinkable. Progressive liberals have set a far-left course that has been followed by most congressional Democrats, even those who once considered themselves to be moderate. They’ve laid out their rules for the “correct” way to think, to speak, and to vote.

“Correct” for the new left includes eliminating border enforcement, giving government benefits to illegal immigrants, socializing education from pre-K all the way through college, striking private health insurance in favor of Medicare, and using taxpayer revenue to pay for abortions without restriction. The stunning ascension of such extreme policy proposals from high-profile Democrats has further cast conservatives, moderates, and many in their own party as the villains in a battle between good and evil.

What has been made abundantly clear in recent days is that the new left has no intention of negotiating their terms. In addition to laying out the way they feel every man, woman, and child should think, the party of “decency” and “tolerance” has become totally intolerant of dissenting thought. Those who challenge their ideas are often branded as racists, misogynists, and even Nazis because to the new left, their extremism isn’t a political ideology, it’s the new national code for morals and values.