Decades ago, the UN promised climate disaster; so why hasn’t it arrived? 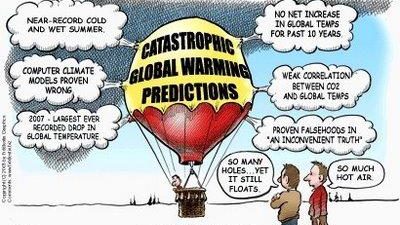 I’m not quite old enough to remember the “global cooling” scare of the 1970s and the media’s drumbeat of the coming ice age that would end mankind. But I have been told many times the end is near by doomsday prophets who have frightened people into green orthodoxy better than any cult leader.

As an 8-year-old kid I was particularly jarred by an episode of the TV show “Diff’rent Strokes” in which acid rain caused Kimberley’s hair to turn green. I lived in New York City just like the TV character, I believed my rain was poison.

Throughout high school I was told that chlorofluorocarbons (CFCs) and aerosols were tearing a hole in the ozone layer, and that it could never be repaired. Deadly UV rays would give us all cancer because I used spray deodorant. I switched to roll-on.

Then came the mother of all doomsday scenarios: global warming. It blew away other environmental issues like candles on a cake. Deadly heat and floods. Ice caps melting. Polar bears dying. Alligators and sharks invading. TV shows. Movies. Books.

Former Vice President Al Gore warned we were all going to die from global warming.

Thirty years ago this week, the United Nations issued a global warming report that I distinctly remember. It predicted worldwide disaster.

According to the report, the Great Plains of America would return to the Dust Bowl. The oceans would rise by several feet, causing low-lying countries like the Maldive Islands and Bangladesh to be underwater.

The report said North Africa would bake into wastelands. Rainforests would be gone, as would much animal life. And it was all because of fossil fuels. American greed. Us. Me. Switching deodorant did nothing to stop it.

And here we are 30 years later, and I look back at that 1989 report, I think only this: What happened?

The predictions in the report were not just a bit “off” – like my calculations in my high school math class, my understanding of Shakespeare, or my failed attempt to high jump. The U.N. report was flat-out wrong. It was 100 percent, complete opposite, 180-degree wrong.

Can I get an explanation, please?

The report claimed “even the most conservative scientists” said there was nothing we could do to stop the Earth from warming three degrees. But Earth didn’t warm that much.

The report claimed we had a 10-year window to fix this or it would be irreversible. It wasn’t.

I’d be OK if this were a one-time mistake, but the U.N. continues to issue such hyperbolic reports. It’s International Panel on Climate Change (IPCC) issued the latest one last December, and it, too, triggered a countdown clock.

The phrase “we have 12 years to fix this” is parroted by almost every 2020 Democratic presidential candidate and their party’s de facto leader, Rep. Alexandria Ocasio-Cortez of New York.

On the bright side, we were told we had 10 years in 1989, so at least the prognosis is better this time.

Why issue another report without correcting the first one? That’s not the scientific method. Can we ask for a correction? Here’s a simple question: What did the U.N. report get wrong in 1989?

After all, this is “science,” and one is expected to believe in science. So let’s lay out the facts dispassionately and objectively, as any unbiased scientist would. Please identify the error and methodological change or formula or data point that has been corrected. Show your work.

Otherwise, why should we believe you got it right 30 years later?

Surely the IPCC has the means to do an after-action review. Since the report was issued the IPCC has raked in over $150 million.

No presidential candidate, and practically no politician, would ever say he or she is skeptical of these U.N. predictions. “Climate denier” is an accusation akin to “war criminal,” and with a leftist movement that is growing more violent and assaulting and doxing journalists, it’s almost imprudent to voice an alternative view.

But the U.N. has a 30-year track record of being wrong on this issue, so I take its reports on climate change and “we have 12 years left” with a grain of salt the size of the Maldives.