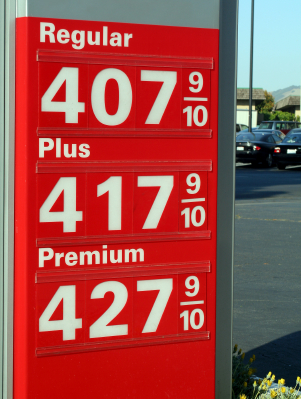 Hypocrisy Watch: Democrats hope they’ve found an issue that will re-energize the fading “Blue Wave” with the recent spike in gas prices. Never mind that the increase is temporary. Or that Democrats have for years tried to force gas prices up — permanently — through various tax hikes.

According to the federal Energy Information Administration, average pump prices for regular gasoline hit $2.923 a gallon this week. That’s up 55 cents compared with the same week last year, and the highest prices have been since November 2014.

Sen. Minority Leader Charles Schumer and other Democrats plan to use this price spike to blast President Trump and, hopefully, improve their election chances in November.

“President Trump’s reckless decision to pull out of the Iran deal has led to higher oil prices,” Schumer said. “These higher oil prices are translating directly to soaring gas prices, something we know disproportionately hurts middle and lower income people.”

But Schumer, as well as the reporters covering him, should know that the high gas prices are the result of three factors that are beyond Trump’s control.

One is the fact that OPEC has tightened its production quotas to counter the huge increase in U.S. oil production thanks to the fracking revolution. Trump has been trying to boost production still more.

The second is that refiners must change their gasoline formulas in the spring to accommodate EPA air quality regulations, which pushes up prices every year at this time. Blame environmentalists for that.

The third is increased demand, thanks to the growing economy here and abroad. Gasoline demand in the U.S. hit record levels in March, and AAA expects 5% more people traveling on Memorial weekend than last year. Memo to Democrats: That’s a good thing.

Even so, prices today are still much lower than they were from 2011 to 2014, before accounting for inflation. And they are likely to subside by the fall as travel demand eases up.

But what’s really rich is that Democrats are complaining about a temporary spike in gasoline prices after having spent years trying to force them up permanently.

As recently as 2015, Democrats were pushing to nearly double the federal gasoline tax. At the time, House Minority Leader Nancy Pelosi said that it was the perfect time to do so because “if there’s ever going to be an opportunity to raise the gas tax, the time when gas prices are so low — oil prices are so low — is the time to do it.”

Democrats in California pushed through a 12-cent-per-gallon hike in the state’s gas tax last year that Republicans are vowing to roll back if they can.

At the same time, Democrats have pledged to impose a tax on carbon emissions of around $50 per ton of CO2 — which would go up each year at a rate faster than inflation — to combat “climate change.”

Schumer himself promised to enact a carbon tax if Hillary Clinton won and Democrats regained control of the Senate in the 2016 elections.

Where was Schumer’s concern about working families then?

This is to say nothing of the Democrats’ endless drive to punish the oil industry either through windfall profits taxes or by stripping them of tax breaks available to other industries. Or their continued push to keep vast oil reserves off limits to drillers.

For Schumer and his fellow Democrats to now complain about high gasoline prices is, dare we say it, the height of hypocrisy and politics at its most craven.