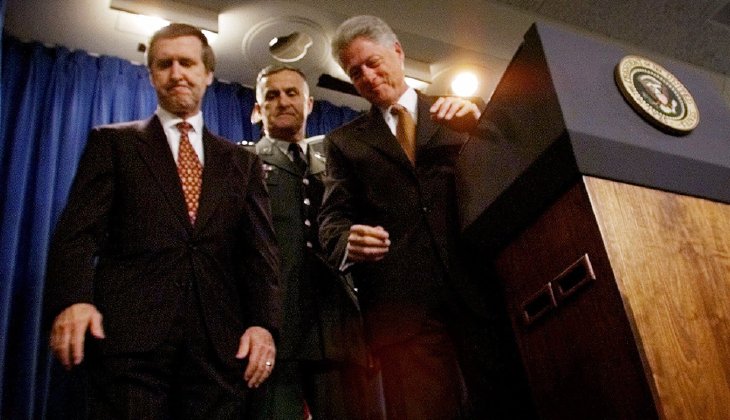 President Clinton walks away from the podium with Secretary of Defense William Cohen and Chairman of the Joint Chiefs of Staff Gen. Hugh Shelton in the briefing room of the White House Thursday, June 10,1999. (AP Photo/Doug Mills)

What do military leaders appointed by President Obama and President Clinton think of Obama’s nuclear deal with Iran? Not much, in many cases. Examples:

• Admiral James Stavridis, NATO supreme allied commander 2009-2013: “I think the top [issue] is the verification regime, which is starting to resemble swiss cheese … you can drive a truck through some of these holes. I am very concerned about that.”

• General Michael Flynn, director of the Defense Intelligence Agency 2012- 2014: “There are so many things that Iran has been gifted right now with this unbelievable deal. I mean, it’s far more than just nuclear issues. I mean, it goes into everything that Iran is going to be capable of doing. And I’m going to tell you. When they receive this $150 billion check essentially I am really concerned about what kind of behavior they are going to continue to display.”

• General Michael Hayden, director of the National Security Agency 1999-2005 and Central Intelligence Agency 2006-2009: “I’m also concerned about our failure to demand an accurate accounting of the possible military dimensions of the Iranian program … It’s not just what they may have done in the past to position themselves with regard to weaponization. The Iranians have been stiffing the IAEA for years on this issue. Now, we are going to rely on the IAEA for verification of this new agreement. After seemingly having taught the Iranians that if you stiff these guys enough, the requirement to concede will go away.”

• General Hugh Shelton, chairman of the Joint Chiefs of Staff 1997-2001: “A regime that can’t be trusted with the lives of its own people can’t be trusted with a weak nuclear deal. The deadly consequences of such an agreement will not come 10 years from now when Iran has the acknowledged ability to launch a nuclear weapon; they will come as soon as the current regime is granted legitimacy on the international stage and gains economic or political leverage over democratic nations, which will happen as soon as their coffers are filled with unfrozen assets and the oil flows unfettered.”

• General Charles Krulak, commandant, Marine Corps 1995-99: “I regret to say that I do not believe the JCPOA [the Iran agreement document] is in the best interests of the United States of America, the State of Israel, the States of the Middle East or, in fact, the world community … we went into this process with specific goals as a baseline and came out with many of those goals either partially achieved or not achieved at all. Even those partially achieved are, at the end of the day, dependent on Iran acting like a trustworthy member of the world community. I am unable to bet the safety of my country or the State of Israel or any other country for that matter on the trustworthiness of Iran.”

• General Barry McCaffrey, commander, Southern Command 1994-96: “In my view the Iran nuke deal is a deeply flawed agreement,” McCaffrey replied to Barnett in an email last week. “Cannot sign your letter of support by retired senior officers to support the White House position.” McCaffrey blasted the nuclear agreement, saying it was opposed by America’s Middle Eastern allies, did not provide for adequate inspections, legitimizes Iran and would encourage a nuclear arms race in the region.

These are all highly respected retired military officers whose judgment should command respect, and their criticisms of the Iran deal are certainly withering.