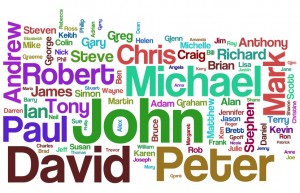 “How can I live without my name? I have given you my soul; leave me my name.”

So says John Proctor in The Crucible, Arthur Miller’s play about the Salem Witch Trials or something. I’ve been acting in a community theater production of the 1953 classic, and it has prompted some thoughts on names, which I will transmute into a proposal for congressional reform before I’m done.

We know instinctively that names are important, that under certain circumstances, they can have “power.” In that same play, Mary Warren says that the devil “want my name.” Juliet may have denied that there is anything special in a name, but she is a distinct literary minority. Harry Potter’s troubles with Lord Whatsisname and Frodo’s with Sauron’s are far more typical.

Some countries have lists of approved names from which parents can choose. France did until fairly recently. Others have lists of banned names. No “Christ,” “Lucifer,” or “Queen Victoria” in New Zealand.

A news report this morning cites “King” and “Messiah” as newly-popular names in the United States, and analysts see this as a sign of positive thinking. More likely it reflects the depths of our despair and our search for a Redeemer.

There are websites dedicated to weird names American parents give their children, and the first name that comes up on one of them is a grand-niece of mine, but that’s really not the point of this column.

I want to return to names as tokens of power, and suggest that we ought to ban their use in the legislative process. Again, I have to distinguish: I am not talking about names given to legislative proposals (think Dodd-Frank), or their fanciful counterparts we used to make up over lunch in the Longworth Cafeteria, and sometimes spoofed in The Washington Post Style Invitational Contest (examples of these are the Long-Spong-Fong-Hong Kong Song Bill, and the coarser—but still funny—Dingle-Berry Bill. These appellations are useful, do no harm, and will eventually go away.

My target, rather, is the use of names to enlist political support and/or sympathy for a policy initiative. Naming post offices and federal courthouses after prominent politicians prejudices the political discourse over the building, but the building is going to be named something, and perhaps it does little harm.

But sometimes it does. Robert Carlisle Byrd was famous for having the entire state of West Virginia named after him (one bean counter found more than 30 federal projects and installations). That cannot have hurt his re-election prospects. And here in Utah, where I live, there is a Senior Center named after the late State Senator Eddie Mayne, which is innocuous enough until you realize that the Center is used as a polling place, and his widow regularly appears on the ballot.

Where I think the harm is real and evident is in the naming of programs of federal largesse after sympathetic characters. In some cases, this is ostensibly to honor them, as with the Stafford Student Loan Program (named after the long-time Republican Senator from Vermont), or the Pell Grant Program (named after Claiborne Pell, ditto Democrat from Rhode Island. These two individuals were the creators of the programs that bear their names, but I think it is undeniable that it is easier to vote for programs so named than if they were called the College Student Future Impoverishment Act or the Student Organized Cadging Act.

Even worse is the drafting of a private citizen into the political wars of Capitol Hill. Exhibit No. 1 in this respect is the Ryan White Care Act. Ryan White was an exemplary young man who contract AIDS through a mishandled blood treatment (he was hemophiliac). After his death, his name was appropriated by federal legislators to ease passage of legislation designed to fight AIDS.

Nothing wrong with fighting AIDS, but to use as poster child for the fight an individual who does not in any way represent the usual path to AIDS infection strikes me as the height of cynicism.

Granted, it’s a small reform, but let’s let policy proposals fight for their lives on a dispassionate level. Let’s do away with labels that prejudice the outcome.

But then what would we do about the Affordable Care Act?