Freedom Centers Economic Freedom Not All Surprises Are Good, Especially in Health C ...

Not All Surprises Are Good, Especially in Health Care

By Peter Roff • The Independent 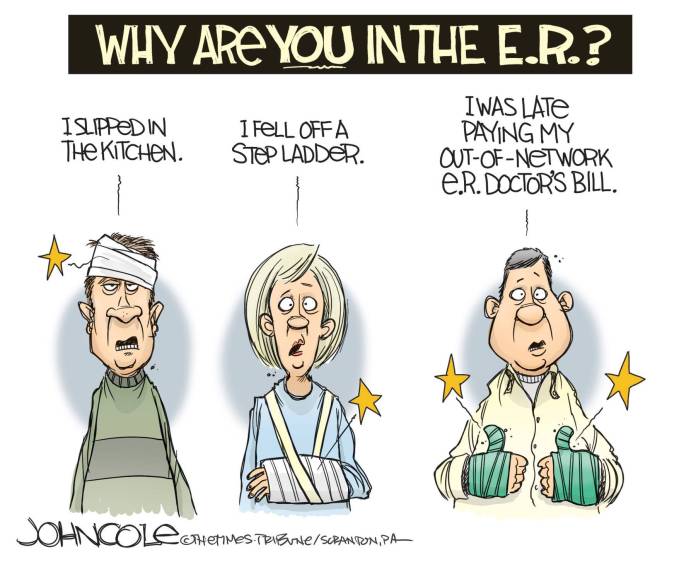 For almost a year, politicians in Washington have talked about the need to fix the problem of surprise medical billing. But, per usual, they haven’t done anything about it.

It shouldn’t be this hard. To review: the bidding – surprise billing, as people call it – occurs when a person with health insurance gets a bill they weren’t expecting from an out-of-network provider whose services they didn’t know upfront they’d engaged.

You might think you could plan for such events and avoid them. But it’s getting harder, thanks to hedge funds and insurance companies that are blurring the lines, some say deliberately. Surprise billing is becoming a medical cash cow in an era where profit margins are being slashed by regulatory efforts to bend the cost curve downward.

The proliferation of undisclosed out-of-network services during in-network procedures has allowed insurers to get from under what their customers believe are their contractual obligations to pay. It’s making doctors and investors rich while giving the Medicare-for-All crowd ample ammunition to move their idea forward.

Medicare-for-All and its ugly cousins all share a few things in common. One of them is the potential that rationing will eventually be used to keep costs from rising. Another is that they all rely on government-imposed cost controls to make the healthcare system work. And that, in case it’s not clear, is exactly the wrong way to go.

The Senate HELP Committee bill is not a good solution. It is bi-partisan and reflects a deal reached in 2019 by the leaders of the House Energy and Commerce and the Senate Health, Education, Labor and Pensions committees. It would essentially ban providers from sending surprise bills and require insurers to pay them, based on the “average price” for the services provided.

It would be better for Congress to do nothing to address the issue than enact a regime that uses cost controls or benchmarking – as the HELP Committee proposal has been labeled – to bring down the price of healthcare. It’s an artifice that changes nothing to the good except a consumer’s perception of what services cost. Controls retard innovation, suppress investment, and create incentives for high-quality medical care to move offshore.

Yet two committees of the U.S. House of Representatives are moving in that very direction.

Proposals recently introduced include one in the Ways and Means Committee that establishes a mediation process for insurers and out-of-network providers when they can’t agree on a payment rate for services provided. A second, coming from the Energy and Commerce Committee last year and adapted this year by the Education and Labor Committee, would decide payment rates using a blend of both arbitration and a benchmark.

Both proposals amount to price-fixing no matter what it’s called. Maryland Republican Andy Harris, a medical doctor by training, put it this way: “By design, placing such price controls on purely private transactions would reduce access to care, increase the power of the federal government, and result in negative, unintended consequences.”

It’s easy, when writing about healthcare reform, to invoke the Hippocratic Oath taken by doctors requiring them to put the interests of patients first. And it should be kept in mind when addressing the issue of surprise billing because it is about people and the care they receive, not just the bottom line.

Health insurers helped write the last round of reforms. They made money – and made sure there were bailouts built into the new system in case they didn’t. Consumers ended up with fewer choices, higher premiums, even higher deductibles, and plans that changed year after year. It wasn’t what they wanted. Some would say the cure ended up being worse than the sickness.

Now the big insurers are spending to position themselves to influence the pathway forward dealing with the surprise billing problem. They’re pursuing new laws and regulations to insulate them from their responsibilities to their customers, to protect them from liability, and to avoid paying for services using a variety of what can best be called coverage loopholes. “Price controls” and “government rate-setting” are a large part of what helped wreck the U.S. healthcare system in the first place.

Insurers need to own their responsibilities to their customers and level the playing field on their own.