Joe Biden’s improbable resurrection suggests that Bernie Sanders and the ideas he champions are more appealing in theory than in practice. 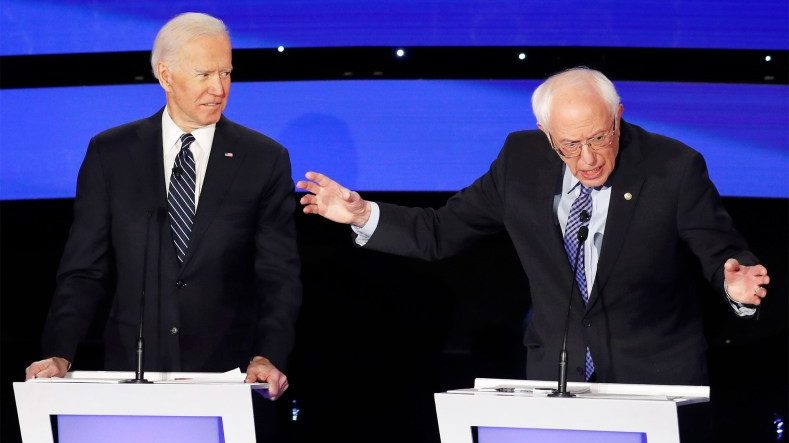 The public’s support for Medicare for All varies wildly depending upon the language pollsters use when asking voters about it. When the Kaiser Family Foundation informed respondents in a recent poll that Medicare for All would “guarantee health insurance as a right for all Americans,” 71 percent of them supported the plan; when they were told that the plan would “lead to delays in people getting some medical tests and treatments,” 70 percent opposed it.

In short, single-payer health care is more appealing in its blurriest outlines than it is when it comes into focus — much like its most prominent proponent, Bernie Sanders.

Sanders enjoys significant personal popularity and has for most of his career. He has become the most popular senator in America by sticking to the same operative philosophy for most if not all of his professional life. (Joe Rogan called him “insanely consistent.”) His policy positions — free college, universal health care, and other expensive giveaways — poll fairly well among voters when framed in abstract terms that elide the costs involved in implementing them. As he frequently reminds the American people with a sense of conviction and moral urgency that stirs up an almost religious fervor among his supporters, he “happens to believe” health care is a yoo-man right.

At some point, though, utopian platitudes have to become concrete policy proposals. Once Elizabeth Warren released her “plan” to upend the American health-care system, she forced voters to confront the actual tradeoffs involved in the sort of “big, systemic change” that she was selling. It’s one thing to tell a pollster you’re for Medicare for All, but it’s quite another to support the same policy after being confronted with the tax hikes and private-insurance ban it would necessitate. Idealism is fine, National Review’s founder famously quipped, but as it approaches reality, the costs become prohibitive.

To be sure, idealism has still gotten Sanders pretty far in his quixotic effort to execute a hostile takeover of the Democratic Party. The apparent popularity of his progressive agenda before its downsides are made clear to voters has helped to fuel his diehard supporters’ intense consternation and anti-establishment sentiment. The obvious antipathy that the Democratic establishment holds for Sanders and his supporters has only furthered their sense that the entire political ecosystem is working in concert to prevent the sort of “political revolution” that they claim, with at least superficial plausibility, has the mandate of the popular will.

All of this — the support for Sanders’s agenda when sketched in its vaguest terms, the real and perceived grievances against the party establishment — has in turn allowed Sanders and his supporters to craft a compelling story: Their movement is a People’s revolution, militating against the forces of dark money and corporate interests, waging a heroic war on the Wall Street tycoons who wield outsize influence on our political process and both political parties. Since public polling shows popular support for the Sanders platform, the narrative goes, any suggestion that Bernie is a “radical” is little more than wishcasting by a bourgeois, neoliberal press, a group of capitalist bootlickers desperate to uphold an indefensible economic order.

This narrative worked better than anyone had a right to expect against Hillary Clinton four years ago, and until last Tuesday, it appeared on track to deliver Sanders the nomination in 2020. With a horde of “moderates” in the race splitting the centrist vote and clear possession of the party’s “progressive” lane, Sanders had been able to finish in a virtual tie in Iowa and command a plurality of support in the New Hampshire primary and the Nevada caucus. While he failed to capture an outright majority in any of the three opening states, his performance was sufficiently strong that his exponents in the press saw fit to take a victory lap. “Why do they never learn?” asked Mehdi Hasan of The Intercept. “The only way to test ‘electability’ is through actual elections, and so far Sanders is two for two.”

Unfortunately for Sanders, after those electoral victories, he became the race’s clear front-runner. Once that happened, Democratic voters were no longer weighing Bernie in the abstract — the jovial, if curmudgeonly, senator whom Paul Krugman strained to depict as a Scandinavian social democrat — but Bernie as a committed ideologue, happy to defend Fidel Castro’s literacy program and the poverty-reduction efforts of Communist China.

For all of the Bernie Bros’ indignation with a Democratic establishment that richly deserves their scorn, it was still the voters who handed Joe Biden — a doddering old warhorse who had seemed a dead man walking for months — a resounding victory on Super Tuesday. He won ten of 14 states, captured 573 delegates to Sanders’s 491, and now leads Sanders in the popular vote by over 900,000 votes. Sanders is still alive in the race, to be sure, but his chances of a comeback are getting slimmer by the minute.

If the origin myth of Sanders’s movement were true — if scheming “ah-li-garchs” were really to blame for keeping his broadly popular agenda at bay — then one would think his campaign could have convinced actual voters that he was a superior candidate to Biden, who often struggles just to put together a coherent sentence on the stump. Perhaps Sanders, and the philosophy he champions, are more appealing in theory than in practice.