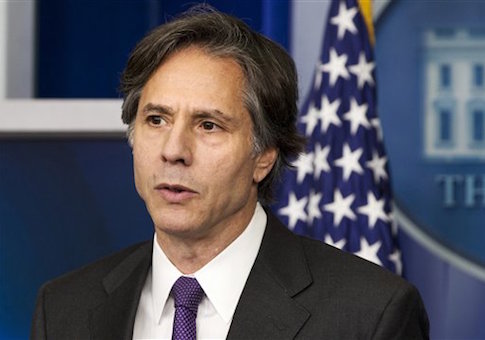 The Obama administration has intervened in a landmark legal case brought by the American victims of Palestinian terrorists, urging the court to limit restitution for the victims out of fear that a sizable payout could collapse the Palestinian government, according to a copy of the court filing.

Deputy Secretary of State Tony Blinken argued in a filing to a New York City court that a hefty payout to the victims of Palestinian terror crimes could burden the Palestinian Authority (PA) and interfere in Obama administration efforts to foster peace in the region.

The victims are entitled to as much as $655 million from the PA following the conclusion of a decade-long lawsuit that exposed the Palestinian government’s role in supporting and paying for terror attacks in Israel.

The administration’s intervention in the case has drawn criticism from U.S. lawmakers and some of those affected by the decision.

While the administration supports the right of terror victims to sue in U.S. courts, it remains particularly concerned about the PA’s solvency.

“The United States respectfully urges the Court to carefully consider the impact of its decision on the continued viability of the PA in light of the evidence about its financial situation,” Blinken writes in his “statement of interest.” “An event that deprives the PA of a significant portion of its revenues would likely severely compromise the PA’s ability to operate as a governmental authority.”

Blinken goes on to warn that the case could impact U.S. security interests and its role in the Israeli-Palestinian peace process.

“A PA insolvency and collapse would harm current and future U.S.-led efforts to achieve a two-state solution to the Israeli-Palestinian conflict,” Blinken writes.

Representatives to the PA had been lobbying the Justice and State Departments to get involved in the case for some time. The PA maintains that it does not have enough funds to pay a bond requirement and has petitioned the judge in the case to drop it.

However, a lawyer representing the victims argues that if the Palestinian government can continue paying terrorists currently imprisoned in Israeli jails, it can pay the victims of these terror acts.

“We are gratified that the Department of Justice supports the rights of survivors of international terrorism to enforce their rights and collect the judgment, but disappointed that the State Department failed to take any stand against the PLO and PA’s policy of putting convicted terrorists on their payroll as soon as they are jailed,” lawyer Kent Yalowitz was quoted as saying in a statement. “If the PA has enough money to pay convicted terrorists, it has enough to pay the judgment in this case.”

Ron Gould, a plaintiff in the case, told the Washington Free Beacon in an interview that there was no reason for the Obama administration to intervene.

“There was really no reason for them to even get involved,” said Gould, whose daughter Shayna was shot in the chest and nearly killed by Palestinian terrorists. “For the Obama administration to stick their fingers where they don’t belong is unconscionable.”

Shayna Gould welcomed the administration’s filing in the case, saying it reaffirms the rights of terror victims to have a fair day in court.

However, she called the argument that the PA could be bankrupted as a result of the suit “ironic, considering they pay terrorists on a monthly basis.”

Shayna Gould said the PA had been hinting that the U.S. government would get involved for quite some time

“It was a fear. It was a huge fear,” she said, adding that the PA should be forced to finally pay up.

“They, with pride, give money and rank of the highest honor to terrorists and people who commit murder,” Gould said. “Does that sound like clipping coupons and saving pennies?”

“I have to deal with [the impact of their violence] in my life on a constant basis,” Gould added, explaining that she deals with physical pain on a daily basis since the attack. “There is no limit to our suffering.”

“There needs to be a price paid for committing acts of terror and the means available to prosecute those responsible,” the group said in a release. “While the victims’ families cannot bring their loved ones back, they can go to the courts to achieve redress.”