Freedom Centers Constitutional and Political Freedom Obamacare Architect: If You Like Your Doctor, You ...

Obamacare Architect: If You Like Your Doctor, You Can Pay More 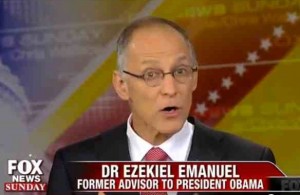 If you want to keep your doctor, you might have to pay more for it, Obamacare architect Zeke Emanuel (and brother of former White House Chief of Staff and current Chicago Mayor Rahm Emanuel) said today on Fox News Sunday.

The host, Chris Wallace, said: “President Obama famously promised, if you like your doctor, you can keep our doctor. Doesn’t that turn out to be just as false, just as misleading, as his promise about if you like your plan, you can keep your plan? Isn’t it a fact, sir, that a number, most, in fact, of the Obamacare health plans that are being offered on the exchanges exclude a number of doctors and hospitals to lower costs?”

“The president never said you were going to have unlimited choice of any doctor in the country you want to go to,” said the Obamacare architect.

“No. He asked a question. If you like your doctor, you can keep your doctor. Did he not say that, sir?”

“He didn’t say you could have unlimited choice.”

“It’s a simple yes or no question. Did he say if you like your doctor, you can keep your doctor?”

“Yes. But look, if you want to pay more for an insurance company that covers your doctor, you can do that. This is a matter of choice. We know in all sorts of places you pay more for certain — for a wider range of choices or wider range of benefits.The issue isn’t the selective networks. People keep saying, Oh, the problem is you’re going to have a selective network–”

“Well, if you lose your doctor or lose your hospital–”

“Let me just say something,” said Emanuel. “People are going to have a choice as to whether they want to pay a certain amount for a selective network or pay more for a broader network.”

“Which will mean your premiums will probably go up.”

“They get that choice. That’s a choice they always made.”

“Which means your premium may go up over what you were paying so that, in other words —

“No one guaranteed you that your premium wouldn’t increase. Premiums have been going up.”

“The president guaranteed me I could keep my doctor,” said Wallace.

“And if you want to, you can pay for it,” said Emanuel.

Daniel Halper is the Online Editor for The Weekly Standard.