Freedom Centers Constitutional and Political Freedom ObamaCare: It is worse than we know … and it ...

ObamaCare: It is worse than we know … and it may get worse 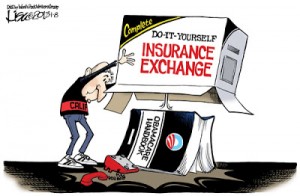 It’s worse than we know, this is the easy part, and millions of Americans could be hurt.

by Ron Fournier  •  The National Journal

President Obama said Monday he’s “frustrated” by the disastrous launch of an online computer marketplace for Obamacare. Here are five reasons why frustration isn’t enough. He should be frightened.

1. It’s worse than his team has let on. The White House has tried to position the failed first days of Obamacare as mere hiccups caused by the site’s popularity. Obama called them “kinks.” An administration spokesman told the Washington Post on Sunday that the “main driver of the problem is volume.” This is intentionally misleading.

The White House has heard complaints from insurance companies, consumers, and health policy experts about issues embedded deeply in the online system. For example: inaccurate information provided to people about federal tax credits; low-income people erroneously told they don’t qualify for Medicaid; and insurance companies getting confusing information about who has signed up.

The administration refuses to say how many people have enrolled through the federal exchange, the key metric for determining how well the online service is working in states that didn’t set up their own exchanges. There are two possible explanations for the Obama administration’s unconscionable lack of transparency. Their process is so screwed up that they don’t have the data, which would be embarrassing. Or they have the data – and it’s embarrassing.

2. This is the easy part. Finding and motivating people to take action online is the founding strength of Team Obama. This is what they do best. Managing a complex law is a different matter, and it’s fair to question whether the president and his team are up to it.

How do you convince healthy young Americans to pay for insurance they may not need in order to fund the program? Do companies shed workers and working hours to avoid coming under the law? Are people with cheap catastrophic plans forced to pay more in the exchanges? Tricky questions likes these will soon make the hard art of website design look like fingerpainting. “The online federal health care exchange, the heart of the Obamacare project, is such a rolling catastrophe that it may end up creating a major policy fiasco immediately rather than eventually,” wrote Ross Douthat in a New York Times column titled, “Obamacare, Failing Ahead of Schedule.”

3. It reflects poorly on the president. Nobody expects the chief executive to be reviewing computer code or hosting East Room “hackathons.” But this falls on him. The CEO of a corporation or country is uniquely responsible for making sure the team is on task, and he or she is ultimately responsible if it’s not. In Obama’s case, did he demand thorough updates on the progress of the site? If so, did he ask the right questions? Did he put the right people on the job in the first place? Given the horrid first days of Obamacare, the answer to at least one of those questions must be “no.”

4. It reflects poorly on government. The public’s faith in government is at a record low, just as Obama is fighting Republicans on several fronts over the size and power of the federal bureaucracy. His administration needs to rapidly improve the online exchanges to stand any chance of convincing, say, young Americans to pay for insurance they don’t think they need. Beyond Obamacare, the Democratic Party’s reputation for competency is as stake. The cost of the site is already $394 million, a massive amount compared to private-sector CMS work, and sure to grow.

5. It could hurt Americans. For decades, politicians in both parties pledged to ease one of the leading causes of anxiety in the post-industrial age, the lack of affordable health care. Nearly 50 million Americans are uninsured, or about 15.4 percent of the population. Millions more are underinsured. Obamacare, enacted three years ago over the objections of Republicans, may or may not be the answer. But, as the White House likes to remind Republicans, it’s the law and it deserves a shot.

How sadly ironic it would be if Obamacare is denied a fair shake because of its namesake’s mismanagement.

“The Affordability Care Act is not just a website,” Obama said Monday, “it’s much more.” True to a point, but the website is critical to the law’s purpose: helping millions of Americans bargain for better health care. Dismissing the extent of the problem and reminding voters that Republicans fought the law — which is essentially all Obama did in his Rose Garden remarks — is a deflection, which shouldn’t be confused with implementation or governing.

Ron Fournier is the National Correspondent and Editorial Director of National Journal.