by The Washington Examiner 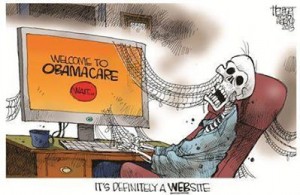 A year ago this week, Healthcare.gov launched and set a new standard for costly technological disasters.

The portal for obtaining private insurance under Obamacare proved completely impenetrable for consumers in its first two months. The constant error messages, glitches and outages became fodder for late night comics, but the Americans forced to interact with the site after Obamacare pushed them out of coverage they already liked were not amused.

A year later, most of Obamacare’s outwardly noticeable technological frustrations are gone. Even though the law remains as unpopular as ever — at 25 percent support among U.S. adults, according to the latest Associated Press poll — consumers who log in when with the second open enrollment begins on Nov. 15 will probably have a less unpleasant technical experience.

But here’s the problem: Beginning with the website’s early failure, the Department of Health and Human Services has concentrated mostly on fixing the portion of the site that the public interacts with. They have not yet fixed major structural and security issues on the back-end, and testing for some of these only begins this month.

Both HHS and the Government Accountability Office have published reports confirming that the site continues to suffer from major security flaws and vulnerabilities that could give hackers access to private health data or even let them take control of the system. This problem persists a full year after healthcare.gov was launched, and after hundreds of millions of dollars have been spent fixing it.

Even if users’ data is not stolen, the system’s structural problems will prove annoying. For example, the system is set to auto-renew current customers who do nothing. But in an incredible oversight, it was not set up to recalculate Obamacare’s premium subsidies for the new coverage year unless an enrollee logs in and re-applies.

Last year’s customers who log in to make minor changes to income or address must actually re-apply to have their changes submitted, even if they just want to keep the same plan. Most of the data on the same old 20-plus-page application will be filled out, but with one important exception — the site will not tell users which plan they currently have, and it will not let them update anything else until they have chosen a plan. If people want to keep their plans, they’ll have to watch the mail for the 14-digit code insurers will probably be sending soon.

Insurers are also concerned about the government quickly bringing its information on customers up to date. If it doesn’t, healthcare.gov might improperly renew customers with outdated information, potentially leaving out children or spouses that consumers added through their insurers during 2014.

These might seem like minor annoyances compared to the price increases and forced cancellations (more of which are coming) that already have Americans so upset over Obamacare. But the fact that such problems persist a year later demonstrates how little thought went into this system.

Thanks to the government’s priority of keeping up appearances, healthcare.gov will probably not be impossible to use on the front-end this year, but the back-end remains a mess of shoestrings and band-aids, which means security threats and hassles for consumers will continue.