On Obama’s Definition of “Rights”

“In the U.S., when we think of rights, we think mainly of negative rights: rights against the government. The Bill of Rights is largely a list of things the government may not do to you.” 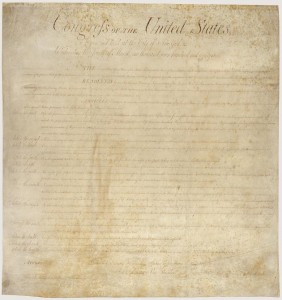 Even Michael Kinsley cannot deny Obama’s over reach and redefinition of the Founders intended rights as outlined in the Declaration and as guaranteed by the Constitution. “President Barack Obama’s [inaugural] speech today made — or tried to make — two different points, both concerning the definition of ‘rights.’ Although couched in the kind of president-ese appropriate to such an occasion, both goals were easy to spot, and both are parts of a solidly liberal vision of society and government.”

Beyond reasonable dispute, Kinsley honesty acknowledges the nature of the rights which the federal government ensures. He also honestly describes how Obama had changed this definition. (One might say that he is bringing ‘fundamental change’ to America. Imagine that. Who knew? ) Kinsley explains, “The president’s . . . fascinating gloss on the concept of rights has to do with negative and positive rights. In the U.S., when we think of rights, we think mainly of negative rights: rights against the government. The Bill of Rights is largely a list of things the government may not do to you. It may not prevent you from having your say, or praying to your own God, or living unbothered in your own house. It may not discriminate against you on account of race, religion, and so on. But it has no positive duty to feed or house you.”

However, Obama seeks to redefine this. Purposely. (Again, think ‘fundamental change.’) Typifying the liberal mindset, and setting its slow creep into a setting concrete – Obama has overtly tied his legacy to the creation of new “rights.” Kinsley states, “There is another view of ‘rights’ that sees them in positive terms, as obligations of society to all its citizens. The right to education, to food, to a job, to health care, and so on. These are the kind of rights that engage Obama.” Put another way, “These are the kind of ‘rights’ that consumes Obama.”

Obama stated in his inaugural address, “We the people, still believe that every citizen deserves a basic measure of security and dignity.” Kinsley comments, “Like the other kind of rights, these rights can exist in theory for years or centuries without being realized in practice.” Sarcastically (?) Kinsley quips, “That’s one reason that the struggle is never-ending.”

Again, with more than a tinge of irony, Kinsley says that as “a politician, Obama claims that his vision of society is uniquely American.” Even Kinsley cannot help but repeat the conservative’s accurate complaint, stating that Obama’s critics have accurately described him “as a European intellectual (two fighting words). In truth, his vision of a properly run society is closer to the European model than, say, Representative Paul Ryan’s.” Of course, a somewhat famous liberal himself, Kinsley guesses that “voters seem to prefer Obama’s” vision. Time will tell, as the policy plays out. Kinsley may well agree that Obamacare is both needed and a good idea. Whether he actually believes it will work in delivering a greater level of “protection” — and at a lower cost — is left unsaid in Kinsley’s inaugural day commentary.

Kinsley suggests there is a reason Obama did not tackle the financial, economic and employment crisis which confronted him at the beginning of his term. “Obama took up health-care reform at the beginning of his first term” not just because “health care for everybody [was] a nice thing to have.” Kinsley confessed that, “It’s central to Obama’s philosophy of government.” (Again, think/remember ‘fundamental change.’)

Succinctly summarized, Kinsley said, “So Obama does have a vision — articulated pretty clearly if not explicitly in his speech today.” And it is this: “Society, through its proxy, the government, should provide the individual with a higher level of protection from hardship and catastrophe than it does now.”

While Kinsley may well urge the president on in pressing for these newly discovered “rights” he is at least an “honest liberal” in accurately labeling what the president is doing. Creating “rights” where the Constitution is silent. Purposely so. Again, think ‘fundamental change.” Honestly. How could we not believe him when he, Obama, repeated it so many times. Fortunately, Americans can, as challenged by the Founders, awaken to what the Constitution really means each and every generation.