By Matthew Continetti • The Free Beacon 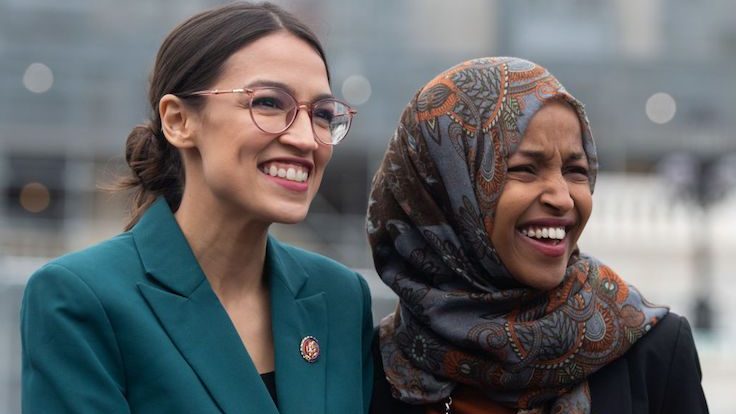 Not so long ago—as recently as the cover of the March 2019 Rolling Stone, in fact—they seemed like the best of friends. I’m referring to Nancy Pelosi and the members of “The Squad”: Ilhan Omar, Alexandria Ocasio-Cortez, and (not pictured) Rashida Tlaib and Ayanna Pressley. They shared some good times.

It was the dawn of a new era. House Democrats had returned to power after eight years. And these Democrats were remarkably diverse in age, ethnicity, race, and gender. Ideology, too: Ocasio-Cortez and Tlaib belong to the Democratic Socialists of America. “Our nation is at an historic moment,” Pelosi said in January. “Two months ago, the American people spoke, and demanded a new dawn.”

Well, the sun has set. And fast. Whatever Pelosi’s plans might have been, they’ve been lost in a fog of anti-Semitism and left-wing radicalism. If Ilhan Omar isn’t causing Pelosi trouble, Ocasio-Cortez is. And vice versa. One day the speaker has to respond to the charge that Jewish money controls American foreign policy. The next she has to downplay flatulent cows. It’s enough to make one pity her. Almost.

Pelosi’s bind began on election night. As Republicans learned from 2011-2015, holding one chamber of Congress isn’t worth that much. The president and the upper chamber block legislation. Frustrated by inaction, the majority turns inward. Divisions grow. The more extreme members target leadership. The speaker spends more time negotiating with her own party than with the president and Senate majority leader.

Recently it seemed as though the major divide would be over impeachment. Pelosi’s terrified by the prospect. The idea isn’t popular, especially with voters in battleground districts. And Mueller’s report didn’t give her much to work with. She would have been in a better position had the special counsel actually said that he thought President Trump obstructed justice. But he copped out, leaving people confused and Pelosi forlorn. She’s let Nadler, Schiff, and Cummings fire their subpoena cannons at will. But this war of attrition favors the president. And deepens the frustration of Democrats who wish Trump had been impeached on inauguration day.

The crisis at the border revealed another division. Shouldn’t have been much of a surprise: Immigration is the defining issue of our time, its tendrils entangling themselves in the politics of democracies around the world.

Democrats, and many Republicans, object to the conditions facing detained asylum-seekers. What separates the Democrats is what to do about it. The majority, including representatives from Trump districts, takes the classic approach: throw money at the problem. The Squad has a different idea. It voted against border funds to “make a point.” And strike a pose.

Ocasio-Cortez’s outlandish rhetoric isn’t helping. She’s described the detention centers as “concentration camps.” Already in favor of abolishing Immigration and Customs Enforcement, this week she said she’s open to shutting down the entire Department of Homeland Security. Why stop there? I’m guessing she doesn’t like the Department of Defense, either. Karl Rove, who in 2002 won a midterm election over DHS, said Ocasio-Cortez’s comments were “moronic, stupid, naïve, and dumb.” That was an understatement.

She’s something, Ocasio-Cortez. At 29 years old, she perfectly embodies her generation’s uniquely irritating combo of self-righteousness and cluelessness. Passionate and charming at first blush, her appeal quickly wears off. In a March Quinnipiac poll her favorability was underwater by 13 points.

What Ocasio-Cortez understands is that, in the culture of social media celebrity, the worst possible thing to do is back down. So, when Pelosi stated the obvious to Maureen Dowd—that for all the attention The Squad receives from the media it is, in the end, four votes—Ocasio-Cortez insinuated the speaker is a racist. And they say liberals oppose nuclear war.

If Pelosi’s racist, then America is in serious trouble. The absurdity of the claim was best expressed by Congressman Lacy Clay, who is black. “You’re getting push back so you resort to using the race card?” he asked. “Unbelievable.” But the very absurdity highlights the position in which the Democratic leadership finds itself. An aging elite must contend with a vocal, far-left cadre of social justice warriors even as the majority depends on legislators who don’t frighten moderates. The differences between the contestants in this liberal Thunderdome are generational, ideological, methodological, and demographic. How Pelosi escapes is a mystery.

Maybe she can’t. Maybe The Squad really is the future of the Democratic Party. After all, Jeremy Corbyn moved from the fringe to the leadership of the Labour Party in the U.K. And the trend of the Democrats has been leftward for a while. If that’s the case, then Pelosi faces a grim future.

And maybe the Democrats do, too. Even if you assume that Ocasio-Cortez’s Twitter and Instagram following counts for something in the real world, she’s not about to help Democrats win Senate races in red states. President Trump and the Republican Party want nothing more than to define the choice in 2020 as between socialism and Americanism, socialism and prosperity, socialism and security. And for whatever reason, Alexandria Ocasio-Cortez is eager to help him.