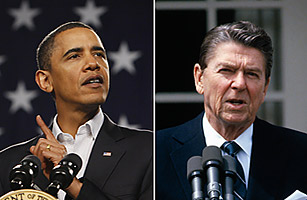 When President Obama and European leaders meet at the NATO summit meeting in Wales on Thursday, they will have one last chance to address the grave dangers to Western security from the mass murder committed by ISIS terrorists and the aggression against Europe and Ukraine by Russian strongman Vladimir Putin.

The president and European leaders must understand why their lack of clarity and resolve on vital matters of national security endangers American and Western security. Halfway sanctions against Russia, a halfway NATO rapid response force in Europe and a halfway war to destroy the Islamic State in Iraq and Syria (ISIS) will not suffice when European security is threatened by an imperial dictator who seeks to destroy borders and genocidal terrorists who target our shores.

The demented beheading by ISIS of a second American journalist, Steven Sotloff, following the killing last month of James Foley, dramatizes again the urgency for America, Europe and decent people of all faiths to unite to destroy ISIS. Let’s pray for Mr. Sotloff and his family, and resolve to eliminate this murderous scourge from the face of the earth.

Obama would be well advised to read the diaries of former President Reagan, probably the best book by a president about how to be president.

In several important interviews, Obama often lapsed into negative ruminations about things he cannot do and the reasons he cannot do them. At times he appears disengaged, overwhelmed and even bored by the presidency. Reagan, by contrast, instructed his speechwriters to use positive formulations, to project confidence, optimism, self-assurance and clarity of purpose.

Obama has been right on some security matters, but there is a widespread view among Democratic and Republican security strategists that he has gone dangerously wrong on key matters. When security risks are great, allies are tentative and Congress is dysfunctional, the president must lead from the front.

Reagan understood this. His diaries detail the time he spent cultivating personal relationships with members of Congress, something Obama disdains. At important moments, Reagan addressed the nation from the Oval Office to shape public opinion and mobilize public support, which Obama declines to do.

Today, America lacks ambassadors to dozens of nations because Senate Republicans refuse to confirm nominees. Yet when Senate Majority Leader Harry Reid (D-Nev.) recently asked the president for help to confirm his own nominees, a disengaged Obama reportedly replied: “You and Mitch [McConnell] work it out.”

For years, American policy toward Syria has been indecisive and incoherent. Obama issued empty demands that Bashar Assad must not cross “red lines” and empty vows that “Assad must go.” His comment that ISIS is junior varsity was trash talk rooted in a lack of knowledge. His smiling presence on the golf course minutes after denouncing the beheading of Foley was unworthy of the presidency. His admission that he has no military strategy toward Syria, years after his advisers began recommending such strategies, was not “a bad choice of words” but a failure of commander in chief leadership.

For many months Putin has escalated his stealth invasion of Ukraine, his ludicrous lies denying Russian aggression, his ambitions to reconstitute the Soviet empire and his attempts to intimidate the West through boasts that Russia is a nuclear power. While Obama sounds an uncertain trumpet, British Prime Minister David Cameron, German Chancellor Angela Merkel and French President François Hollande sound a cacophony of incoherence. They hector Putin with loud ultimatums but institute only weak and puny sanctions, all the while as France sells warships to Putin’s military, bringing to mind Lenin’s boast that capitalists will sell him the rope with which he will hang them.

Full sectoral financial sanctions against Russia should begin immediately. A NATO rapid deployment force of 10,000 should be created and available in Europe and to supplement airstrikes against ISIS in Syria with support from Muslim nations.

As NATO confronts its biggest challenges since the end of the Cold War and the terror attacks on 9/11, Reagan’s diaries are more relevant than ever. Under Reagan, major new wars did not begin, but the Cold War ended. Reagan understood that the surest way to preserve peace through diplomacy is to project strength with resolve to deter adversaries and support negotiations.

Obama should apply the lessons of history described in the Reagan diaries and lead from the front. If he does, the world will be a safer place. If not, the gathering storm will bring even more danger in the hours ahead.

Brent Budowsky was an aide to former Democrat Sen. Lloyd Bentsen and Bill Alexander, then chief deputy majority whip of the House. He holds an LL.M. degree in international financial law from the London School of Economics. He can be read on The Hill’s Contributors Blog and reached at [email protected]