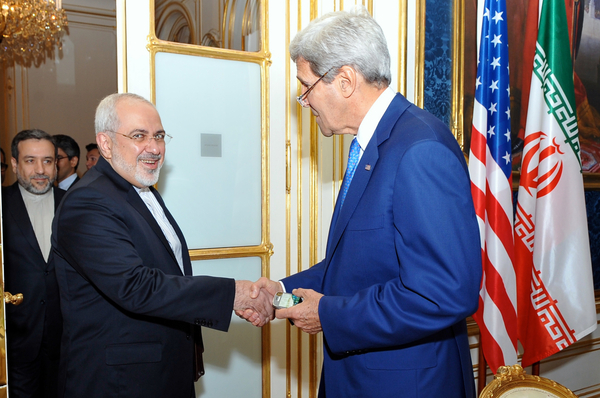 The Nuclear Non-Proliferation Treaty (NPT) forbids any of its signatories to have nuclear weapons. Full stop.

The P5+1 have been attempting to amend the NPT without going through the process established by the NPT itself — and attempting to do this for just one of its 190 signatories: Iran.

The NPT can only be changed through a review conference of all parties. All changes agreed to after that must be consented to by the signatory nations, according to their own legal requirements.

The rules, therefore, ever since the U.S. Senate consented to the treaty in 1969, are that the Senate would have to approve any change to the treaty. Otherwise, any nation that is a signatory to the NPT could say that it is no longer bound by the terms of the agreement and decide to have their own nuclear weapons capability — as many have already stated they would do, starting with Saudi Arabia, Turkey and the United Arab Emirates.

If Iran is allowed by the P5+1 to violate the NPT, not only will it have nuclear weapons capability with impunity, but also lifted sanctions, and a strong economy that will enable it go on expanding its reach, while remaining the world’s largest promoter of terrorism.

As there already is an internationally agreed-upon law totally forbidding Iran from acquiring nuclear weapons — even if Iran were fully to cooperate — which, considering its proven track-record, is doubtful — why does anyone need yet another agreement to stop Tehran’s nuclear program?

Why is the international community not simply enforcing the current NPT?

Iran has already violated so many provisions of the NPT that the UN Security Council and the UN’s International Atomic Energy Agency (IAEA) imposed a second protocol requirement on Tehran, to ensure that it abides by the 1970 treaty. The second protocol was also intended to ensure that, in the event of violations, major economic sanctions were imposed Iran by key members of the international community, including and most importantly the United States.

Iran has not abided by the second protocol of the NPT, either. Iran continues to spin its centrifuges and enrich uranium, while demanding that all sanctions immediately be ended.

Instead of simply requiring Iran to live up to its obligations under the NPT — signed and ratified by Tehran in 1968 and 1970, respectively — the five permanent members of the UN Security Council plus Germany are trying to give Iran a special deal.

Well, the P5+1 have proposed unilaterally to amend the NPT — just for Iran, no other nation.

If Iran is allowed nuclear weapons capability, other nations — including in South America, already infiltrated by Iran — will doubtless follow suit.

The P5+1 would allow Iran, while still a member of the NPT, permanently to enrich uranium and produce plutonium in return for agreeing for some number of years (possibly ten), not to enrich “too much.”

There is, however, no “right to enrich” at all under the NPT or any other law, contrary to some misinformed “conventional wisdom.”

There are nearly two dozen countries that produce nuclear energy, which do not enrich uranium. Others that do are under IAEA safeguard agreements that do not allow — in theory and mostly in practice — the diversion of such fuel to highly enriched weapons-grade uranium.

Iran is therefore asking for special status in the nuclear bomb business, regulated by the NPT. Iran is asking that it be allowed to maintain thousands of centrifuges that enrich uranium. It is also demanding to be allowed nuclear reactors that produce plutonium, which can also make nuclear weapons.

In addition, Iran is demanding that there be no restrictions on its ballistic missiles. Its arsenal is already the largest in the Middle East. According to the Director of National Intelligence, Iran has rockets that can reach all of the Middle East and much of Europe, and is moving in the direction of having an intercontinental ballistic missile (ICBM) capability, as early as this year, to strike other continents, presumably including the U.S.

Iran is further demanding that there be no restrictions on its state sponsorship of terror, which includes its support, financing and arming of terror groups such as Hamas, Al Qaeda and Hezbollah.

Tehran also apparently will be given a pass on its complicity in attacks against Americans in Iraq, Lebanon, and Afghanistan, as well as the terror attacks at Khobar Towers, the African embassies and the World Trade Center in 2001, (as outlined by the 9-11 Commission Report).

Despite demands by the UN Security Council that Iran provide UN inspectors with access to facilities that members of the IAEA believe are or were used for nuclear weapons work, Iran has refused to comply. Some of these facilities have meanwhile been razed to the ground by Tehran, thereby eliminating what evidence might have been available for inspection.

In 2009, the Manhattan district attorney indicted a Chinese company — for the second time — for providing the top Iranian military commission in Iran with nuclear weapons technology components, now likely buried under tons of Iranian dirt and sand.

In light of this sad history, it is understandable that any agreement with Iran should, in the eyes of Congress, have the solid concurrence of the House and Senate; and if not a legal agreement requiring a simple majority vote, then a treaty requiring the concurrence of two-thirds of the U.S. Senate.

But as Secretary of State John Kerry has testified to Congress, the contemplated agreement with Iran would not be a treaty and would not have the force of law. It would be akin to an executive agreement, although the U.S. State Department spokesperson said that, at some time down the road, while the agreement in still in place, Congress might be asked to remove the congressionally-imposed sanctions against Iran.

In other words, if the potential agreement is neither law nor treaty, subsequent congressional action will be required for an executive agreement to which the Congress has not agreed in the first place.

There are also five other significant issues.

1. The deal would seek to amend the NPT unilaterally by the agreement of only seven of the 190 member nations of the NPT. Others have not given their consent. Such a change would also be in direct violation of the current provisions of international law, which lay out a well-defined path for any changes to the NPT.
2. Given that the NPT is a treaty to which the Senate consented in 1970, the NPT can only be amended by Senate concurrence in any such changes.
3. If the agreement with Iran is not law insofar as the U.S. obligations go, what about those of the government in Tehran? In Iran, would this agreement have the force of law, or would the Supreme Leader, who this week said “Death to America,” be allowed to change its terms unilaterally? And what would be the consequences to him if he did?
4. If the agreement is not law, this means, insofar as the U.S. constitutional system is concerned, that any future President need not abide by its terms, and certainly any future Congress is not bound by its terms.
5. If the administration is seeking UN Security Council approval of the agreement, but not Senate approval, it is seeking to violate the U.S. Constitution, which has primacy over all laws, including international treaties. Since when can the UN Security Council amend U.S. treaty law? The UN can certainly propose amendments, but it cannot approve such changes on behalf of the U.S. Congress and the American people.

Forty-seven U.S. Senators put many of these same points in a March 2015 letter, which they sent to the rulers of Iran. This was met with thunderous condemnation by the Obama Administration. The letter indicated that the Senate signers obviously did not trust the Administration to abide by the terms of the Executive’s agreement.

The Senators who signed the letter are worried that any agreement with Iran that is not required to secure Senate or House concurrence, will be, by its very nature, weak and filled with concessions to Tehran that could be harmful to U.S. national security.

Implicit in the letter is the concern that any agreement between just the Iranian regime and the U.S. Administration will not have sufficient safeguards. Considering the experience of the U.S. with North Korea, what would be safeguards tough enough to assure Iran’s compliance? The negotiators, for instance, might be concerned that any realistic safeguards acceptable to the Senate might not be acceptable to the mullahs in Iran — making approval by the Senate unlikely.

The Senators who signed the letter certainly trust that the Administration will, in fact, abide by America’s obligations in a new agreement. To them, that is the problem: if the agreement is terrible, the U.S. should not be forced to abide by it.

Requiring Senate concurrence would obligate the provisions of a new agreement to stand the sunlight of a tough examination during a Senate debate.

The Senate critics of the pending deal with Iran simply do not share the belief of the Obama administration that Iran can become a “partner for peace” with the U.S.

They seem, understandably, opposed to an agreement that comes with a note saying, “Trust us,” as an adequate substitute for the Senate scrutiny such a deal should require.

One important safeguard not in the agreement, for example, according to the Secretary of State, is that the agreement will “sunset” (expire) after a number of years. And on that date, Iran could return to being an ordinary member of the NPT again, despite its centrifuges, its terrorism and its ballistic missiles. It would then be free to enrich uranium to its heart’s content — a “right” that is not in the NPT.

Then Tehran, unfettered by second protocols, sanctions, or enhanced inspections, can decide either 1) publicly to throw away the confines of the original NPT and break out toward nuclear weapons; or 2) surreptitiously to sprint to the development of nuclear weapons under the cover of the NPT.

Supporters of the Administration’s position say: Don’t worry; down the road a decade or so, the government of Iran will have changed.

How likely is that?

North Korea, which joined the NPT in 1985, actually signed a nuclear agreement with the U.S. After the IAEA in 1992 found suspicious discrepancies in its nuclear fuel production, North Korea agreed, in an October 1994 “Agreed Framework,” not to produce nuclear weapons.

In 1998, North Korea launched a long-range missile that had the capability, if further developed, of carrying a 2000-pound warhead to Hawaii and Alaska.

In 2002, North Korea admitted to cheating on the Agreed Framework, and to producing enriched uranium at a secret centrifuge facility.

In 2007, North Korea actually signed a new “agreement” with the United States, to denuclearize the Korean peninsula and end its nuclear weapons program.

North Korea subsequently complained that the U.S. requirement for a “permanent” end to a North Korean nuclear weapons program was unfair. So did many in the American arms control community. They criticized the George W. Bush Administration for pushing an agreement that was “too tough.”

Today, intelligence estimates indicate that North Korea has 10 nuclear warheads, as well as ballistic missiles that can, with a small nuclear payload, easily strike the West Coast of the United States.

In 2014, North Korea launched into orbit a small mock satellite that passed over New York and Washington, D.C.

The Director of National Intelligence says that this space-launch capability gives North Korea a pathway to develop an intercontinental ballistic missile (ICBM) capability.

Iran also just so happens to be the country with which North Korea most cooperates on ballistic missile development.

During the nuclear bomb tests by North Korea, satellite photographs showed members of the Iranian military, including the head of the Islamic Revolutionary Guard Corps, visiting the North Korean nuclear test site.

And in Washington, the Senate’s letter is considered the problem?