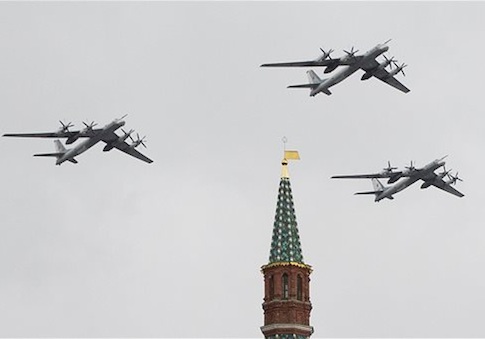 ‘Spike’ in Bear H flights over past week seen as test of U.S. air defenses

Also, during one bomber incursion near Alaska, a Russian intelligence-gathering jet was detected along with the bombers.

Smith called the Russian flights “a spike in activity” but sought to play down the threat, stating the flights were assessed as routine training missions and exercises.

The bomber flights took place mainly along the Alaskan air defense identification zone that covers the Aleutian Islands and the continental part of the state, and one incursion involved entry into Canada’s air defense zone, Smith said.

The Russian strategic aircraft included a mix of Tu-95 Bear H heavy bombers and Tu-142 Bear F maritime reconnaissance aircraft, she said, adding that one IL-20 intelligence collection aircraft was detected during the flight incursions over the past week to 10 days.

The bomber flights are the latest case of nuclear saber rattling by the Russians.

However, other defense officials said the large number of aerial incursions is very unusual and harkens back to the Cold War, when Soviet bombers frequently sought to trigger air defenses along the periphery of U.S. territory as preparation for a nuclear conflict.

As for its long-range aviation flights near U.S. coasts, Russia has been sharply increasing the activities, especially in the Pacific Northwest near Alaska, Canada, and the West Coast.

The Washington Free Beacon first reported that two Bear bombers flew within 50 miles of the California coast on June 9—the closest the Russians have flown their nuclear-capable bombers since the days of the Cold War. A U.S. F-15 intercepted the bombers.

A defense official disagreed with the spokeswoman on the increased bomber forays. Russian strategic nuclear forces appear to be “trying to test our air defense reactions, or our command and control systems,” said an official familiar with reports of the incursions.

“These are not just training missions,” the official added.

Northern Command and NORAD in the past frequently sought to dismiss the Russian bomber incursions as non-threatening as part of the Obama administration’s conciliatory “reset” policy of seeking closer ties with Moscow.

The Pentagon and other commands, however, have toughened rhetoric toward Russia and its activities after the Russian military annexation of Ukraine’s Crimea in June.

Moscow dismissed the charges as untrue.

Adm. Cecil Haney, commander of the U.S. Strategic Command, expressed concerns about the increase in Russian strategic nuclear activities during a speech in Washington June 18.

Haney said Russian nuclear activities coincided with recent tensions over Ukraine and included the test launch of six air-launched cruise missiles in a show of force.

A Russian Defense Ministry statement on the cruise missile test launches said a Tu-95 bomber “is capable of destroying the critical stationary assets of an enemy with cruise missiles, in daytime and nighttime, in any weather and in any part of the globe.”

“Additionally, we have seen significant Russian strategic aircraft deployments in the vicinity of places like Japan, Korea, and even our West Coast,” Haney said at a defense industry breakfast.

“Russia continues to modernize its strategic capabilities across all legs of its triad, and open source [reporting] has recently cited the sea trials of its latest [missile submarine], testing of its newest air-launched cruise missile and modernization of its intercontinental ballistic force to include its mobile capability in that area,” he said.

U.S. officials confirmed that an RC-135 Rivet Joint electronic intelligence gathering aircraft was forced into violating Swedish airspace by a Russian fighter jet July 18. The U.S. jet was seeking to evade the Russian interceptor jet at the time.

That encounter took place a day after Malaysian Airlines Flight MH17 was shot down by a missile over eastern Ukraine.

Bill Gertz is senior editor of the Washington Free Beacon.