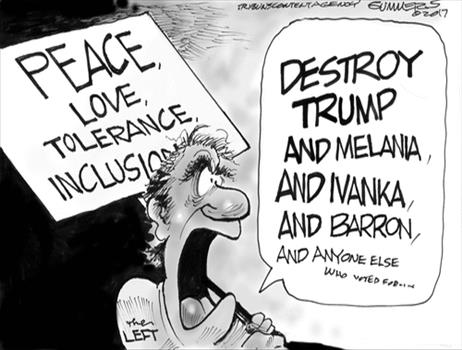 The Democrats clearly don’t need to spend a dime on the 2020 presidential election campaign when they have almost the entire mainstream media doing free infomercials for them, and with just about the same level of authenticity and reliability as you would expect from those ads for Miss Cleo’s Psychic Friends Network.

It’s hard to know why the networks and cable news channels don’t have to declare their in-kind contributions to the Democratic Party when it is so obvious that their No. 1 goal is getting Donald Trump out of office. You can’t really blame the First Amendment because neither you nor I can make unlimited donations to the candidate of our choice or else it’s called (cue the scary music here) “daarrrrrrk money.” Our political speech is not protected by the First Amendment, so neither should the blatantly biased political speech of phony journalists who are less interested in reporting facts than expressing outrage.

Take this example from last week on MSNBC:

“If it’s Tuesday: Divide and conquer. The White House offers up a few changes to the famous Statue of Liberty poem about immigrants, putting the spotlight once again on the president’s campaign to stoke racial division.”

No. If it’s Tuesday, it’s Kasie Hunt making up stuff on “MTP Daily” to hurt President Trump because Chuck Todd is too busy stroking his own ego to do the job. There, I fixed it.

And in case you missed the meme, the new libel on President Trump is that he is a racist. This campaign may not have the traction of the Russian treason libel, which was able to last for three years on the basis of a phony dossier paid for by his political opponents in the Democratic Party, but NBC and the rest of the Democrat cheerleaders in the Fake News Media don’t care. They know they just need the public to buy their lie about Trump being a racist for a little over a year, and with their experience in spreading manure — er, I mean propaganda — they are no doubt confident that they can add Trump’s scalp to their closet of Republican trophies.

So back to the deplorable Kasie Hunt (and I mean that in the original sense of someone loathsome) and her campaign of hate against Trump. Here was how she started her program last Tuesday:

“There is no longer any question about what kind of campaign the president is running. He is staking his reelection on stoking racial division — with megaphones and with dog whistles. After just yesterday announcing a plan to penalize legal immigrants who rely on public benefits like Medicaid or food stamps, a top immigration official suggested a rewrite to the poem on the Statue of Liberty.”

Actually, he didn’t. In response to a question by Rachel Martin on NPR, Ken Cuccinelli agreed that the words “Give me your tired, your poor” are part of “the American ethos,” but he pointed out that we expect immigrants to “stand on their own two feet, and … not become a public charge.”

This is hardly a novel idea. In fact, it has been on the books in one form or another since 1882, when the United States government passed its first comprehensive immigration law. The idea is simple, too. Don’t expect to move to the United States if you can’t support yourself. This seems like a pretty reasonable request from a country with a $22.5 trillion national debt.

It also, by the way, has nothing whatsoever to do with race. It applies to all people without regard to race. If anyone has a campaign “to stoke racial division,” it is MSNBC, which hears a dog whistle every time the wind blows. (By the way, why is it OK to refer to Trump voters as dogs? I never did figure that one out.)

After making her case that President Trump is following a “strategy of stoking racial division” that supposedly worked in 2016, Hunt said, “The question now: Will it work it 2020, and what are Democrats doing to fight against it?”

Cue the all-Democrat infomercial panel to confirm Ms. Hunt’s anti-Trump bias and repeat back to her that Trump is indeed a racist pig, or dog, or some such non-human species. They dutifully responded as expected, but not to be outdone by her guests, Hunt then raised the stakes by stating as a matter of fact that “clearly the president is ready to wage a race war.”

Say what? Did she really just say that? Yep, and if you are like most Americans, this is the point where you turned off MSNBC and asked what planet these people live on! President Trump’s war is against Fake News, not against people of color.

Again, immigration reform has nothing to do with race, and the United States is not obligated to allow entry by everyone who wishes to move here. Indeed, the government has a responsibility to vet those who seek visas and those who seek green cards. To presume otherwise is insane.

When you move to a new country, before you become a citizen you are essentially in the position of a potential tenant hoping to rent a bedroom. That metaphor allows people to see the illogic of the leftist position, which is based on the idea of giving the tenant more power than the homeowner.

If, as a homeowner, you decide to rent out a room in your home, you will commonly ask for references from the prospective tenant, and usually a credit check as well. Why? To make sure that the person can support him- or herself and will not prove to be a drag on you and your family. For peace of mind, it’s also worth checking to see if they’ve ever murdered anyone. That’s called a background check.

To think that the greatest country in the world would do any less to protect the safety and security of its citizens is just plain wrong. Anyone who would invite a stranger into their own home without knowing anything about them is a chump. If you want to pay the stranger’s way, that’s your business — but don’t ask the taxpayers to do it!

There’s no race war, and what’s worse, there’s no outrage at MSNBC for having a host who says there is without evidence. No repercussions, no discipline, no nothing. Crickets. Maybe that’s because everyone already knows that MSNBC isn’t a news organization at all — just a fully owned subsidiary of the Democratic Party.