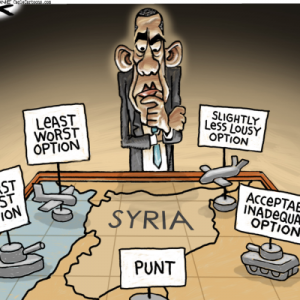 Do congressional Republicans face an impossible choice between being politically used or undermining U.S. prestige in the Mideast? The corner that President Obama has trapped them in is just an illusion.

The most important fact about the president’s decision to ask Congress’ permission before striking Syria is that it is 100% political.

Even the American Enterprise Institute’s hawkish Marc Thiessen warned that Obama’s limited strikes “will likely fail, and he wants Congress on the hook so that Republicans cannot criticize his Syria policy when it implodes.” Therefore, “Republicans should not take the bait” by voting yes.

For the sake of looking united in the eyes of the world, should Congress really endorse President Obama’s incompetent drawing of red lines he never thought Bashar the Butcher would dare cross, followed by lobbing in some cruise missiles just to save face?

Or worse, fiddle with the White House’s Syrian draft resolution and inadvertently make U.N. Ambassador Samantha Power’s dream come true of a U.S. military that acts not in U.S. interests but as a global anti-genocide corps? Good luck applying that to, say, North Korea.

And what if we do help Syria’s Islamist rebels ultimately overthrow Bashar Assad? As Sen. Rand Paul, R-Ky., told NBC’s “Meet the Press,” that could mean “another Islamic state where Christians are persecuted.” Christians make up 10% of Syria’s population.

Democratic Party Chairwoman Debbie Wasserman Schultz, who has never uttered a nonpolitical word in her life, says a “no” vote would be a refusal to “exercise the moral leadership that the United States has always led with.” She’s even playing the Holocaust card.

Meanwhile, Rep. Nancy Pelosi had an Amy Carter moment: when her 5-year-old grandson opposed attacking Syria, she told him, “I generally agree with that, but you know, they’ve killed hundreds of children there.”

Funny, we didn’t hear worries of hurting America’s credibility from liberal politicians and journalists in 1973, when Nixon’s secret bombing of Cambodia spurred a Democratic-controlled Congress to pass the War Powers Resolution over Nixon’s veto — a titanic embarrassment to the commander in chief in the midst of the Cold War, Vietnam, opening to China, etc.

Same in the 1980s when Congress’s Boland Amendment restricted Ronald Reagan’s assistance to the Contra anti-communist freedom fighters in Nicaragua.

For years, the president will claim a bipartisan endorsement of his foreign policy. It may not be ideal for the world to see Washington divided, but “United We Stand for an incompetent, self-loathing U.S. foreign policy” is no battle cry for these dangerous times.

This article was written and published by the editorial board of the Investors Business Daily.