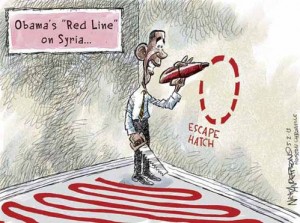 Why are we even talking about taking military action in Syria? What is that military action supposed to accomplish? And what is the probability that it will in fact accomplish whatever that unknown goal might be?

What is painfully clear from President Obama’s actions, inactions and delays is that he is more or less playing it by ear, as to what specifically he is going to do, and when. He is telling us more about what he is not going to do — that he will not put “boots on the ground,” for example — than about what he will do.

All this is happening a year after issuing an ultimatum to the Bashar al-Assad regime in Syria against the use of chemical or biological weapons. When the President of the United States issues an ultimatum to another sovereign nation, he should know in advance what he is going to do if that ultimatum is rejected.

But that is not the way Barack Obama operates. Like so many people who are masters of lofty words, he does not pay nearly as much attention to mundane realities. Campaigning is his strong suit. Governing is not.

With the mainstream media ready to ooh and aah over his rhetoric, and pass over in silence his policy disasters as President, Obama is home free as far as domestic politics is concerned. But, on the world stage, neither America’s enemies nor America’s allies are hypnotized by his words or his image.

Nations that have to decide whether to ally themselves with us or with our enemies understand that they are making life and death decisions. It is not about rhetoric, image or symbolism. It is about whether nations can count on the realism, wisdom and dependability of the American government.

Make no mistake about it, Barack Obama is a very clever man. But cleverness is not wisdom, or even common sense.

When he was in the Senate, Obama — along with Senators Joe Biden, Chuck Hagel and Hillary Clinton — was critical of the Bush administration for not being favorable to the Assad regime.

Hillary Clinton said that she and other lawmakers who visited Assad considered him a “reformer.” Back in 2007, when Secretary of State Condoleezza Rice appeared before the Senate Foreign Relations Committee, both Senator Biden and Senator Hagel chided her for not being more ready to negotiate with Assad.

Senator John Kerry in 2009 said, “Syria is an essential player in bringing peace and stability to the region.”

Some people said that having Joe Biden as Vice President meant that President Obama had someone with many years of foreign policy experience. What they ignored was that Biden had decades of experience being wrong on foreign policy issues, time and time again.

Biden opposed President Ronald Reagan’s military buildup that countered the Soviet Union’s buildup, and helped bring about both the end of the Cold War and the end of the Soviet Union. General David Petraeus’ “surge” strategy that greatly reduced the terrorist attacks in Iraq was opposed in 2007 by Senator Biden, who said, “We need to stop the surge and start to get our troops out.”

Senator Hillary Clinton not only opposed the surge from the outset, she was among those who refused to believe that it had succeeded, even after all the hard evidence had convinced most other people.

The grim reality is that key people in positions to shape our foreign policy during the Obama administration — the President, the Vice President, two Secretaries of State, and the current Secretary of Defense — all have a track record of grossly misconceiving the issues, our enemies and our national interest.

This is the administration that is now asking for a blank check from Congress to take unspecified military action to achieve unspecified goals.

“Military action” is a polite phrase for killing people. It would be nice to believe that this has some larger purpose than saving Barack Obama from political embarrassment, after having issued an ultimatum without having thought through what he would do if that ultimatum was ignored.

He has the authority to take military action if he wants to. The question is whether he can sucker the Republicans into giving him political cover by pre-approving his unknown actions and unknown goals.

Thomas Sowell is an economist, social theorist, political philosopher, and author. He is currently the Rose and Milton Friedman Senior Fellow on Public Policy at the Hoover Institution, Stanford University.  This article was published in the Columbus Dispatch.