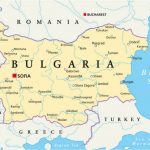 There are European leaders who talk openly of replacing NATO. They seem upset that America is expecting them to keep their treaty obligation to spend 2 percent of the Gross Domestic Product (GDP) on defense. In stark contrast, Bulgaria’s ruling GERB Party strongly backs NATO and the United States. Bulgaria is putting its money where its mouth is — agreeing to NATO’s financial commitments. END_OF_DOCUMENT_TOKEN_TO_BE_REPLACED