Extending, expanding or enlarging the electric vehicle tax credit is bad policy and robs the taxpayers 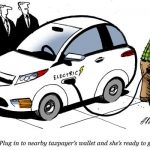 Any extension, expansion or enlargement of the electric vehicle tax credit is a profoundly bad idea and essentially robs the taxpayers to pad the pockets of the wealthy who can afford the best lobbyists money can buy.

When the original legislation giving tax credits and subsidies for electrical vehicles passed more than a decade ago, its sponsors promised that it would be temporary and were only designed to help new technologies gain a foothold in the marketplace.  Now more than a dozen years later, some irresponsible legislators are ready to move away from temporary, limited subsidies and are headed towards a permanent and almost unlimited subsidies.

This is both bad policy, and dangerous. Government’s power to tax should not be used to transfer wealth to those who can afford the best lobbyists. Single parents working two jobs to make ends meet should not be forced to take an extra shift so that they can support this sort of wasteful spending.  If rich car purchasers want to buy new expensive electric sports cars, they should be free to do so. But the idea that they should be able to reach into the wallet of the single parent struggling to make ends meet is unconscionable!

Virtually 80 cents of every dollar spent on subsidies went to households with more than $100,000 of income.  And, of course, all of the taxpayer provided cash benefits wealthy and profitable car companies — like Tesla and its billionaire founder Elon Musk. It is revealing that almost 1/2 of all the subsidies for electric vehicles go to just one state — California.

There is no need to extend, expand or continue subsidies for electric vehicles.  Sales of electric cars have been on the increase for years. The original rationale was that the temporary aide would help them get established and build economies of scale that would drive prices down.  Twelve years is more than enough time.

Some argue that the subsidies are justified because electric cars are “zero emission” vehicles. But that is a lie. Electric cars are plugged into the power grid to recharge and whatever emissions were created while generating the electricity needed to recharge the car are the car’s emissions.  Nationally, that won’t be anything close to zero. Moreover, recent studies indicate that full life-cycle emissions from electrical vehicles may exceed those from new internal combustion engines. So it is unlikely that electric vehicles provide the environmental benefits promised.

Since there is no longer any plausible or rational reason for the subsidies, the real reason is laid bare — car companies want more taxpayer cash and they’ve lobbied Congress hard to get it. Mr. Musk and Tesla and others who receive the benefits of this taxpayer provided subsidy would love to extend and expand it. But that isn’t a good reason to give them more taxpayer cash or to reach into a single parent’s wallet so that some rich guy can get some help to buy that very cool electric car.

Moreover, the public doesn’t support the idea of taxpayers helping people buy expensive and trendy electrical cars. By landslide proportions, 2 in 3 Americans oppose these subsidies, and with good reason.

The truth is most people would love to receive a perpetual gift of cash. There’s an old saying, “A government that robs Peter to pay Paul can always count on the support of Paul.”  That’s what we have here.  Paul is in favor of Paul getting millions of dollars provided by Peter.  This is clearly just based on greed.

Even more important, our constitutional system cannot devolve into a system in which one group gets to vote itself cash from another group.  But that’s what we have here.  Nothing more.  A vote to extend, expand, or enlarge this subsidy is a grotesque violation of the public trust.