The Outsourcing Of America’s Food

They used to grow apples in Iowa; now the apple juice comes from China and it's just corn and soy as far as the eye can see.

By Austin Frerick • The American Conservative

When I was a child, my parents used to pile me and my siblings into my dad’s Oldsmobile Bravada every Sunday night and drive us to my grandparents’ house, just outside of town. In my home state of Iowa, the food economy is painted into the background, and we passed by a number of farms on the way. But at that time, you didn’t just see corn. We drove by a series of apple orchards and fields full of cows out to pasture.

Iowa once had a diversified farm economy. A 1935 guide commissioned by the Federal Writers’ Project described the variety of produce grown within the state, and the regional specialties that flourished. The area around Davenport, near the border with Illinois, was known for its onions, while Northern Iowa specialized in sugar beets. Grapes grew out west near Council Bluffs and Omaha. Peaches were concentrated in the south along the Missouri border. Muscatine, in the southeastern corner of the state, was famous for its melons.

Today, the apple orchards near my grandparents’ house have been replaced by endless rows of corn and soy. In fact, my county lost 88 percent of its apple orchards between 1992 and 2017. Farmers are growing more and more of a few heavily subsidized crops in place of pretty much everything else. The peaches and onions and other crops that used to be grown within the state are now sourced from well beyond its borders.

The transformation in Iowa of a diverse agricultural economy into one narrowly focused on a pair of commodity crops is the product of a bigger trend that is taking place throughout our country. A new set of incentives imposed on farmers has mixed with an embrace of unrestricted free trade with countries like China and Mexico to create a dangerous situation: the outsourcing of the American food system.

This trend has its roots in the latter half of the 20th century, when allies of Wall Street and agribusiness corporations like Ezra Taft Benson and Earl Butz used their positions as secretary of the U.S. Department of Agriculture to reward their benefactors. Instead of promoting balance in the food system, they attacked family farmers and admonished them to “get big, or get out.” Butz, in particular, encouraged farmers to plant commodity crops “from fencerow to fencerow.”

They were one-upped by President Bill Clinton, who was able to do what Benson and Butz could not: pass the Farm Bill that multinational agribusiness corporations wanted. The Federal Agriculture Improvement and Reform Act of 1996—or the Wall Street Farm Bill, as I like to call it—pays farmers to overproduce certain commodities like corn and soy, putting downward pressure on their prices.

Cheap corn means cheap feed for slaughterhouses, which is why companies like Smithfield saw record profits in the years following passage of the law. It also means lower input costs for food processors like PepsiCo that transform commodity crops into high fructose corn syrup and other byproducts that are used to make everything from ketchup to pop to potato chips to dog food. The relative cost of commodity-derived products fell sharply between 1982 and 2008: 10 percent for fats and oils, 15 percent for sugars and sweets, and 34 percent for carbonated beverages. Over the same period, the price of fresh fruits and vegetablesincreased by 50 percent.

But as American agriculture has turned to growing more and more commodities for processing, fruits and vegetables are increasingly imported from other countries. Around the time he passed the Wall Street Farm Bill, Clinton also signed the North American Free Trade Agreement, which encouraged the outsourcing of food items that require more than a minimal amount of labor. Instead of paying Americans a fair wage, companies can import food from countries with minimal environmental and labor protections.

Farmworkers in Mexico, just over the border, earn in a day what their counterparts in California earn in an hour. The model mirrors how clothing companies such as Nike benefit from the unethical practices of overseas subcontractors. Recent investigations have even uncovered the use of child workers in the production of tomatoes in Mexico bound for America. More than half of all tomatoes sold in America are now brought in from Mexico.

The design of this framework benefits only the largest farmers who have the resources to produce these commodities at scale. For family farmers, the impact has been devastating. The share of each dollar spent on food that winds up in the hands of farmers has fallen from 53 cents in 1946 to 14 cents today, the lowest level ever recorded. Diversified family farms raising a variety of crops and livestock have been replaced by large industrial operations exclusively growing commodities like corn and soy at scale.

This grimness has caused countless family farms to throw in the towel. Since 1980, America has lost 50 percent of its cattle farms, 80 percent of its dairies, and 90 percent of its hog farms. As Benson and Butz threatened, farmers were forced to choose between getting big or getting out. The average size of a farm nearly doubled from 650 acres in 1987 to 1,201 acres in 2012. Many people are familiar with the infamous farm crisis of the 1980s, which pushed thousands of farmers into bankruptcy. But the reality is that America’s Heartland has been in a perpetual state of crisis for the past few decades.

As farms consolidate, more and more of the wealth leaves rural communities. Most land in Iowa is not even farmed by the owner any more. The loss has choked the vibrant local economies that developed around agriculture. Towns hollow out and desperation seeps in. This system has also exacerbated climate change. The further that food travels to get to your plate, the more carbon is put into the atmosphere via a fossil fuel intensive transportation system.

We have an opportunity to turn the corner and to build a better economy that puts family farmers, local businesses, and communities at its center. We can start by ending the outsourcing of the American food system. Apple juice served in Iowa schools should come from Iowa farmers, not from a country on the other side of the globe. This isn’t a utopian vision, nor does it require radical change. In fact, what we have now—where the largest owner of pigs in America is a Chinese state-linked company and where drug cartels are involved in farming the avocados we eat—is what’s truly radical. 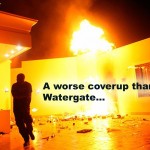 ‘The entire reason that this has become the political topic it is is because of Mitt Romney and Paul Ryan.”

Thus, Stephanie Cutter, President Obama’s deputy campaign manager, speaking on CNN about an armed attack on the 9/11 anniversary that left a U.S. consulate a smoking ruin and killed four diplomatic staff, including the first American ambassador to be murdered in a third of a century. To discuss this event is apparently to “politicize” it and to distract from the real issues the American people are concerned about. For example, Obama spokesperson Jen Psaki, speaking on board Air Force One on Thursday: “There’s only one candidate in this race who is going to continue to fight for Big Bird and Elmo, and he is riding on this plane.” END_OF_DOCUMENT_TOKEN_TO_BE_REPLACED