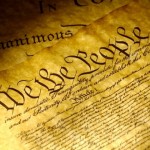 Washington is a city that has long been known for partisanship. Even as respected and honored as he was, George Washington was viciously and unjustly attacked by partisans.

Thomas Paine who helped build support for America’s independence by writing the historic political pamphlet “Common Sense,” accused Washington of corruption and wrote that “the world will be puzzled to decide whether you are an apostate or an impostor; whether you have abandoned good principles, or whether you ever had any.”[1]

Partisans for Thomas Jefferson and John Adams viciously attacked each other with such labels as: atheist, tyrant, coward, fool, hypocrite, and weakling. Jefferson’s allies accused Adams of having a “hideous hermaphroditical character, which has neither the force and firmness of a man, nor the gentleness and sensibility of a woman.”[2] Adam’s partisans called Jefferson “a mean-spirited, low-lived fellow, the son of a half-breed Indian squaw, sired by a Virginia mulatto father.”[3]