Liberalism as an Instrument of Coercion

In the 20th-century, New Dealers revised this definition by arguing that people had a right not only to free speech and freedom of religion but also, as Franklin Roosevelt said in his 1941 Four Freedoms speech, freedom from fear and from want. END_OF_DOCUMENT_TOKEN_TO_BE_REPLACED

The Supreme Court this morning issued its ruling in the Hobby Lobby case. At issue was whether closely held companies like Hobby Lobby could be forced by the government to provide abortifacient coverage to its employees, in defiance of its owners’ deeply held religious beliefs.

In a 5-4 ruling written by Justice Samuel Alito, the Supreme Court ruled that Hobby Lobby and other closely held companies do not have to provide contraceptive coverage that conflicts with the religious beliefs of the companies’ owners. Here are 5 major takeaways from the Supreme Court’s decision. END_OF_DOCUMENT_TOKEN_TO_BE_REPLACED 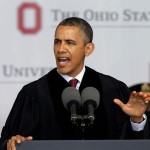 Obama’s directive to ignore those concerned with potential abuses of big government was stunning for at least two reasons. First, it is as American as apple pie and baseball to be wary of the promises of government officials and the abuse of power. Second, within a week, several Obama Administration scandals had broken wide-open – each proving that those concerned about government tyranny were right. END_OF_DOCUMENT_TOKEN_TO_BE_REPLACED