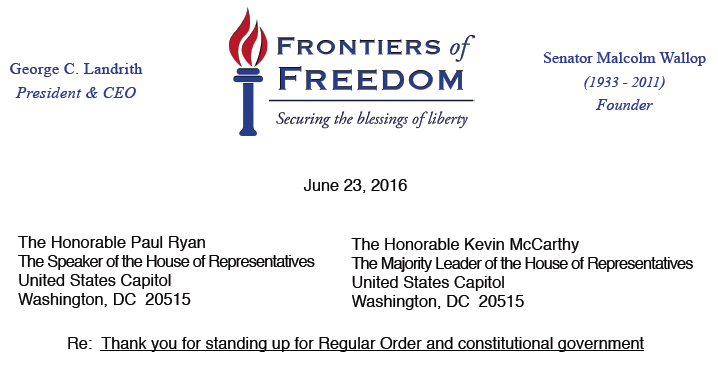 Frontiers of Freedom and its hundreds of thousands of supporters all across the nation want to thank you for your commitment to returning to Regular Order. During the past decade, the practice of setting the Regular Order process aside has weakened the concept of the co- equal branches of government and has sacrificed Congress’ power of the purse. As that has happened, fiscal responsibility has been sacrificed and the Administration has seen its power increased because the constitutional checks and balances have effectively been overridden or bypassed. So we cannot possibly state strongly enough our appreciation and approval of your commitment to Regular Order. It is not merely a process issue — it is a return to our Constitutional roots. Thank you!

When an appropriations bill — the way Congress actually spends the people’s money — is scrutinized in committee and “marked up,” it allows Members of Congress to eliminate waste, reduce funding for less important priorities and ensure that the most important priorities receive needed funding. It allows for amendments to be voted on and ensures that the public’s business is conducted in public. The bottom line is that Regular Order makes the Constitution’s protections real and it encourages good, responsible, and transparent government.

It is always easy to slip back into sloppy ways and use Regular Order only selectively. But we appreciate your commitment to Regular Order and constitutionally limited government. We have been watching how the House deals with the West Lake landfill in Missouri. It is a “Superfund” site under EPA jurisdiction. It has been subject to a lot of delays, but recently a plan has been approved and is schedule to be set in motion. But just as this plan was about to get underway, there was a move to shift cleanup to the Army Corp of Engineers. This would bring unions into the process and may explain why Sen. Claire McCaskill is so intent on quickly getting this moved through Congress. It would cost taxpayers millions and likely set in motion more delays. If this bill is allowed to escape Regular Order, it effectively becomes an “earmark.”

While we believe that moving the West Lake landfill to the Army Corp of Engineers is a terrible idea and will only create another growth in government, we appreciate the fact that this proposal which will spend the people’s money is currently being subjected to the Regular Order process. Some may say this needs to move quickly. But the truth is, Regular Order is needed to ensure that this is actually the best use of the public’s money and the best approach for cleaning up this site. Nothing is so important that the process should be short- circuited and the issue be given virtually no scrutiny. Those who oppose an open, thorough and honest review are admitting that their proposal lacks merit. Senator McCaskill’s proposal lacks merit. If it didn’t, she would be happy to have it work its way through the Regular Order process.

This is just one example of how your commitment to Regular Order saves the public’s money and ensures that their government is working for their interests in an open and honest way.

Thank you for returning the U.S. House of Representatives to the Regular Order process and thank you for insisting on a respectful constitutional approach to conducting the people’s business and spending the people’s money. We encourage you to continue this commitment.