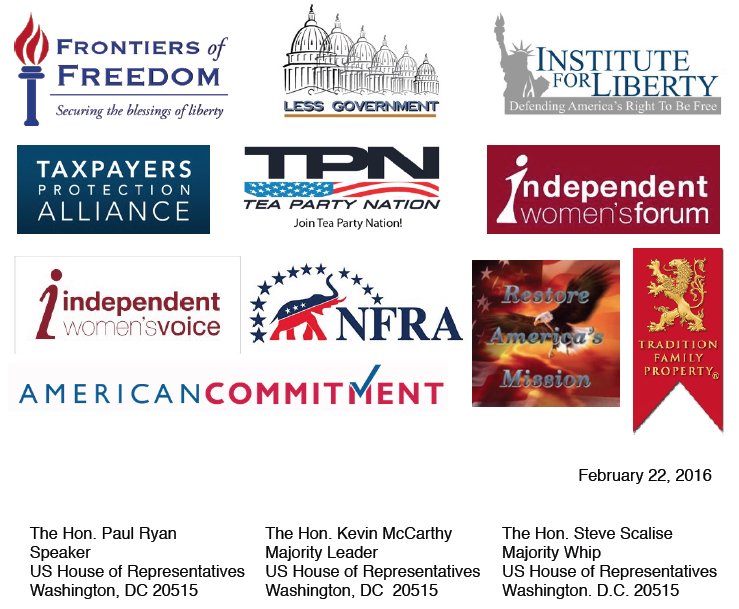 The current earmark ban is good policy and good politics. It’s popular with taxpayers who believe special interest spending has come to dominate the policy discussions on Capitol Hill and it has prevented the adoption of spending measures that would add to the deficit and national debt.

We strongly urge you to keep the ban in place and to resist efforts to get around it. In particular we see a potential for abuse in the use of the suspensions calendar to allow for votes on legislation that has not been through the hearing process, has not been marked up, and which have a considerable price tag attached.

It is our understanding, for example, that several members of the House are petitioning the leadership to bring H.R. 4100 up on suspension. Its Senate companion, S. 2306, has already passed by unanimous consent yet neither bill has been the subject of a single hearing. Members have not had the opportunity to study it, to add input, or to ask questions about a measure that would transfer control of an environmental reclamation project from the United States Environmental Protection Agency to the U.S. Army Corps of Engineers at an estimated cost to the taxpayers of $400 million while further delaying its start.

The principal supporters of this bill, which shifts responsibility for a landfill clean up in the St. Louis, Mo, area, are asking to have it added to the suspension calendar sometime in the next few weeks. To us, this is unacceptable. The proposed legislation may have merit but so may the objections to it as far as environmental policy, cost, and speed of the clean-up are concerned. Ultimately though, because there have been no hearings, one can only speculate.

Allowing HR 4100 to go forward on suspension establishes a dangerous precedent for the future operations of the House under regular order. If this bill gets a simple majority one can argue persuasively at some future point for its inclusion into a future omnibus or appropriations conference report because the Senate has approved and majority of the House is on record as giving their assent without a single hearing. That its advocates are all members of the same state and that they are doing so ostensibly for the benefit of a lone congressional district in that state is, in our view, a clear violation of the spirit of the earmark ban. For this reason alone HR 4100 should be left in committee to proceed forward under regular order.

We hope that this letter will lead to a clarification of House policy. We suggest, for simplicities sake, that henceforth no legislation that spends significant amounts of taxpayer dollars that has not been through regular order – as is the case with HR 4100 – be allowed on the suspensions calendar.