By Richard A. Epstein • The Hoover Institution 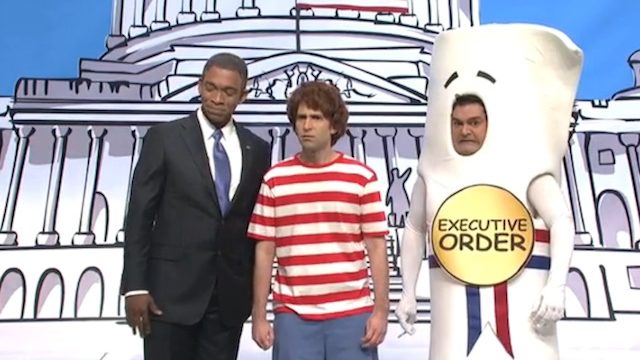 A vexed Supreme Court is now considering the legal status of the highly popular program, Deferred Action for Childhood Arrivals, better known as DACA. DACA’s survival is now up for grabs in three related cases before the Court, which are being consolidated under the name Department of Homeland Security v. Regents of the University of California. The Court displayed its angst about the legality of DACA during last week’s oral argument for the case.

In June 2012, President Barack Obama initiated the program whereby children who were brought into the United States illegally became eligible to remain for two-year renewable periods so long as they did not committed any felonies or misdemeanors. As designed, the program does not offer these “Dreamers” a path toward citizenship, but it does authorize them to get jobs, obtain driver’s licenses, social security, and a host of other privileges. There are now close to 700,000 Dreamers in the United States, and they have often excelled, as students, military personnel, and workers. Most emphatically, they are not “far from angels,” let alone “hardened criminals,” as President Trump scandalously tweetedon the day of oral argument.

Fortunately, the debate before the Supreme Court rose above that low bar. At issue was the Dreamer’s “reliance interest” in the continuation of the DACA program. The notion of a reliance interest is old and runs throughout the law. It holds that a claim that is otherwise imperfect becomes fully protected once the recipient relies on the promises or actions of the defendant—here the government—to its detriment, and thus cannot be returned to his original position. As a substantive matter, I think that DACA was a welcome modification of national immigration policy. But as a legal matter, the issue is more complicated.

Of course, Trump’s election as president marked a dramatic reversal in immigration policy. In September 2017, Trump gave Congress six months to come up with a legislative solution to the DACA issue, which, to him, boils down to the simple fact that the Dreamers, having come to the United States illegally, have no right to remain in this country. No such deal was worked out, and the Trump administration issued an order to terminate the program. The order was promptly postponed in the lower courts on the ground that Trump was not exempt from the Administrative Procedure Act of 1946, which provides that a court “shall … hold unlawful and set aside agency action … found to be … arbitrary, capricious, an abuse of discretion, or otherwise not in accordance with law.”

What is odd about the current dispute before the Supreme Court is that it subjects the Trump administration’s DACA decision to close scrutiny without once asking whether the same level of scrutiny should have applied to then-President Obama’s decision to create DACA in the first place. It is still an open question whether or not Obama had such legal authority in June 2012 to issue his own executive order. On multiple prior occasions, as in October 2010, Obama had repeatedly denied that he had the power to remove or alter the legal status of these individuals by saying “I am not king. I can’t do these things just by myself.” Yet less than two years later, Obama reversed himself and unilaterally imposed a new legal regime under the fig leaf that he was only exercising the most traditional form of prosecutorial discretion, whereby a prosecutor may decline to pursue a case under the law if he thinks that the evidence is not strong enough to warrant pursuing the case, or that other matters have higher priority.

But the outer limits of that discretion is a decision not to prosecute, not on the strength of individual facts, but for an entire class of persons, such as the dreamers.  I regard this practice as questionable at best. If a president can refuse to deal with minor, non-violent offenses, can he also refuse to prosecute serious offenses because he thinks that the penalties are too steep? But even if he can rethink prosecution for broad classes of cases, he may not unilaterally change the status of illegal aliens (the statutory term) under state law.

As such, in my view, the DACA program was flatly illegal at the time it was first issued, because no amount of administrative review under the APA could cure this initial defect by making administrative findings about the strength of the supposed reliance interest. Yet, it was not possible for anyone to immediately challenge the program on its face before implementation. The reason for that is the standing doctrine engrafted onto Article III of the Constitution that restricts access to the federal courts to cases in which there are concrete and discrete “injuries in fact” to a particular person that are traceable to government action and capable of remediation in the event of a favorable decision. In the case of DACA, this standing doctrine means that the case can only be brought by some party that suffers that kind of discrete injury, which cannot be any general member of the public at large.

This narrow interpretation, however, misreads the key language of Article III, which states that “the judicial Power shall extend to all Cases in Law and Equity” that arise under the Constitution. The requirement of particularized injury is satisfied whenever an individual is subject to a deportation under the immigration laws. But the limited definition of standing—itself a term nowhere found in Article III—ignores the phrase “in equity,” which has long included challenges against ultra vires action—those beyond the power of any corporation, charitable organization, or local government. In other words, the legality of DACA should in principle be subject to challenge by any citizen who thinks that the program is illegal.  If many such cases are brought, they can be consolidated into a single proceeding.

Accordingly, no recipient of DACA benefits could challenge the statute, and it is a tough sell to say that a state has standing to challenge the statute simply because it must issue driver’s licenses to Dreamers. While the driver’s license argument was accepted in 2015 by Judge Jerry Smith of the Fifth Circuit in Texas v. United States, a case which challenged DACA-spinoff program DAPA (Deferred Action for Parents), its thorough examination is of limited precedential value because its judgment was affirmedone year later, without opinion, by an evenly divided Supreme Court.

The standing issue would be trivial, however, if any citizen of the United States was entitled to challenge the illegality of any presidential order. Accordingly, the correct procedure needs an expedited review of DACA’s constitutionality before it was put into place. It is always easier to decide on the legality of a program before it is implemented, not afterwards.

Unfortunately, that did not happen. Hence the glacial pace at which DACA reached the Supreme Court has made it plausible for individual DACA claimants to insist that their reliance interest should force the Trump administration to do what the Obama administration never did— namely, give a set of reasoned justifications under the APA for reversing Obama’s original DACA order.

But their argument is suspect on two grounds. The first is that the reliance interest claim is weak in this context. There are all sorts of ways for individuals to rely on the decisions of other parties in organizing their own conduct. Company S, for example, contracts with local government L to remove snow from the streets. The contract lasts for several years, during which time X buys an automobile that he parks by the street. If L and S agree to reduce the frequency and quality of the snow removal services, X does not have a claim against either solely because he relied on their joint decision when he purchased his automobile.

In the language of contract law, a Dreamer is an “incidental beneficiary” who does not acquire rights against the government simply because the past implementation of DACA improved the Dreamers’ overall position. It is perfectly rational for every DACA recipient to take full advantage of the program. But it is not possible for them to claim that their past good fortune gives them any future entitlement to program continuation. Any waivers of enforcement power in two-year chunks can be stopped at any time.

The point has not been lost on defenders of DACA who grimly understand that the whip in all immigration cases lies with the President, such that the best they could hope for is a delay in action whereby the Court insists that the Trump administration offer a more detailed justification for its decision. Indeed, one reason why the oral argument proved so frustrating is that there was still judicial doubt—as expressed by Justices Ginsburg, Sotomayor and Kagan—as to whether the Obama program was illegal when issued. Hence Justice Ginsburg pressured Solicitor General Noel Francisco to explain the “strange element” whereby he argued first that DACA was flatly illegal, and then asserted that the Trump administration had ample discretion to end the program because of its policy reservations on its ends and purposes.

There is less to Ginsburg’s objection than meets the eye. Francisco was arguing the case in the alternative—first, that the program was illegal, but then if not, that the administration could end it in the same fashion it was implemented, by presidential order. In my view, the first of these grounds is correct. However powerful the case for DACA on the merits, the constitutional principle of separation of powers does not grant to the president the power to create an entire immigration reform out of whole cloth. Asking for a memo in justification for undoing that error seems most unwise. The standards here are necessarily fluid, and that inquiry invites lower courts to keep DACA in place by constantly raising the burden of proof to extreme levels.

Ironically, if this view on legality is correct, the harder question becomes whether Trump had the power to extend DACA once he came into office after he concluded that DACA was constitutionally infirm from its inception. The whole inquiry quickly enters uncharted waters, given the evident need to allow some limited time for transitions to take place. But the matter is too urgent for it to be resolved by either presidential directive or by judicial decision. Fortunately, the same option that was available in 2012 is available today: enact DACA as is for a short-term fix, and then work through the larger immigration challenges at a more thoughtful pace. The human toll is too great to tolerate more indecision, confusion, and delay.