The Government slow-down: A case study in bad faith politics and failed leadership 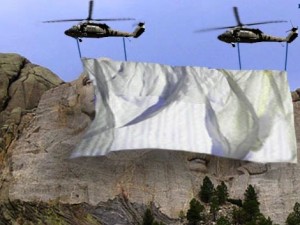 The Obama administration continues to play politics and operate in perpetual campaign mode, rather than lead or govern. Obama has shutdown portions of the government and even private property owned by American citizens not because the law requires it, but because he sees a political advantage in doing it and then blaming his adversaries. He knows that the mainstream media will gleefully assist him in this endeavor regardless of the facts.

One party hopes to force the nation to have a serous conversation about government spending, our nearly catastrophic national debt, and our seeming addiction to deficit spending. The other party calls names, shifts blame, and acts lawlessly to inconvenience, burden and disrupt the lives of Americans. They want to make the government slow-down as painful and as difficult as possible.

Obama says that he will negotiate with Republicans after they give him what he demands. But at that point, what would be left to negotiate? Does anyone really believe that after having received what he wants, Obama would honestly sit down and negotiate in good faith?

Obama is relying on the mainstream media to do his bidding and help him blame his adversaries for his own lawlessness and malice. Obama is closing things that he has no authority to close or no need to close and that require manpower and money to close — a curious decision in a time of a government shutdown that allows only essential functions.

Here are just a few examples of Obama’s bad faith:

Obama denied the request of WWII Veterans who were in town to visit their monument. The WWII memorial is an out door, open air granite monument that is open 24 hours a day, 365 days a year and requires no personnel to remain open. But the Obama administration instructed the Park Service to erect barricades and post guards to make sure no one visited a number of outdoor monuments in DC, including: the Lincoln, the Vietnam, the WWII, and the Martin Luther King Jr. monuments were all barricaded.

While keeping the veterans out ultimately failed, it was only because the veterans were not easily deterred. They arrived with signs that read, “When we came to Normandy, it was also closed.” But just today, the Obama administration opened the Mall for a group of his allies rallying for immigration reform. So at Obama’s direction the Mall is closed for some and open for others.

The Obama administration shut down the Amber Alert website which is designed to help locate missing and abducted children. Meanwhile Michelle Obama’s government run website — “Let’s Move” — remained online and fully functioning. If Obama were a Republican, the news media would be waxing indignant about how he doesn’t care about the plight of kidnapped children.

The Obama administration ordered Nevada homeowners, Ralph and Joyce Spencer to leave their home near Lake Mead. The Spencers have owned the home which sits on leased federal land for more than 35 years. Interestingly, they were not evicted during the 1996 shutdown when Bill Clinton was in office. Their eviction is not lawful. But Obama doesn’t care because it would take years to litigate such matters and he knows this shutdown will be resolved long before a court would declare his actions illegal.

The Obama administration has also instructed the National Park Service to close privately run marinas, restaurants and inns throughout the country. In many cases, they have even posted guards to keep the public from accessing the establishments. Oddly, the Obama administration argues they must close the privately owned and run establishments because the government lacks funding. Yet, government erects barriers and posts guards — which requires funding. The truth is, leaving these people alone does not cost anything. Harassing them does. All of this is done so that the obsequious and compliant mainstream media can blame Obama’s adversaries for his lawless behavior.

In North Carolina, the Obama Administration sent Park Rangers to block the driveway to a privately owned business, the Pisgah Inn, located along the the Blue Ridge Parkway. They tried to shutdown Mt. Vernon, the home of our first president, George Washington, even though the historic site is owned and operated by a private charity and is not a federal property. Park Service rangers told an incoming bus that Mt. Vernon was closed and instructed it to leave. This is lawlessness.

But it doesn’t stop there, Obama had the Park Service barricade and close overlooks along nearby roads so that by-passers could not photograph Mt. Rushmore even from a distance. Even liberal comedian and late night television host David Letterman acknowledged that things were completely out of hand when he joked that Obama placed a huge tarp over the Statue of Liberty so that no one could see it during the shutdown.

In Philadelphia, the Obama administration closed the City Tavern, a privately owned and operated restaurant because it is located on federally owned land near Independence Hall. Similarly, on Cape Cod, the Obama administration has ordered the Nauset Knoll Motor Lodge another privately owned and operated business to be closed. There is no reason for these establishments to be forcibly closed. They do not receive federal funding. They are private owned and operated. Their closure doesn’t save any federal dollars. It simply about inconvenience and disruption. Obama wants to make it worse.

In Virginia, portions of the bike trail that runs adjacent to the George Washington Memorial Parkway and the Potomac River have been closed. In D.C. a walking path in Rock Creek Park has been barricaded and park rangers stood guard to make sure no one walked or jogged there. The Obama administration has even tried to close the ocean. In Florida, the Park Service informed charter boat captains that they could not enter 1,100 square miles of open ocean until the shutdown was over. It is almost certain that more resources will be used to enforce the closure than would be required for normal management of the area.

A Park Service ranger acknowledged the Obama administration gave the orders to be obstructionist, saying, “We’ve been told to make life as difficult for people as we can. It’s disgusting.”

If Obama were a Republican, the mainstream media would be howling about the lawlessness and shocking hubris. But the mainstream media is largely silent. It dares not report the president’s bad faith, violations of law, and his abridging of basic rights. Instead, it castigates those who wish to discuss budget reform and reforming the immensely unpopular ObamaCare.

There are two main things to be learned from recent events. First, Obama is incapable of leading as a grown-up. He simply plays politics and campaigns. But when the campaign is over, he has no idea how to lead, or no inclination to do so. So he simply continues the perpetual partisan campaigning. Second, the mainstream media is intellectually lazy and corrupt. The free press was once considered an important bulwark of American liberty. Today, the mainstream media largely functions as a propaganda ministry for the extreme Left.

Both of these lessons prove that the price of liberty is eternal vigilance. For too long, too many Americans have not been vigilant. As a nation, we have ourselves to blame for the fact that we have a president incapable of leadership and a press incapable of honesty.