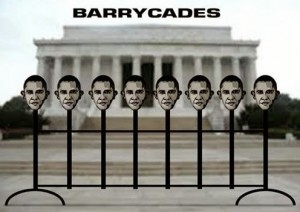 It takes more staff and more money to close the
monuments than to leave them open.

National parks and monuments from coast to coast have been shuttered since Tuesday, but not because of the federal government shutdown. No, most of these tourist attractions and community recreation spots were blocked off strictly for show.

The Obama administration wants to make the partial shutdown as visible and painful as possible to the taxpaying public by closing off as many popular destinations as possible, even though many of these destinations are supported by visitor fees, including Southern Nevada’s Red Rock Canyon and Lake Mead. As reported by the Review-Journal’s Henry Brean last week, recreation businesses held a Thursday news conference at Red Rock Canyon’s locked gates to rightly bemoan the shutdown, with Pat Williams of Friends of Red Rock Canyon saying, “The public lands have been held hostage by our elected leaders.”

Partisan warfare over a budget deal and the implementation of Obamacare’s individual mandate led to the shutdown. As of Friday evening, President Barack Obama and Senate Majority Leader Harry Reid, D-Nev., had refused to negotiate with House Speaker John Boehner, R-Ohio. If they’re to be believed, federal agencies can’t so much as buy toilet paper.

But it costs more to put up barricades than it does to just leave parks open. At some destinations, it requires more staff to keep out the public than it does to let them in. And the charade doesn’t end with designated national parks. The Claude Moore Colonial Farm in Virginia hasn’t received a dime of federal funding since 1980, when the National Park Service zeroed the farm’s budget, even though it sits on federal land. Farm Managing Director Anna Eberly said the destination has thrived, thanks to entry and use fees and fundraising, despite decades of “benign neglect” from the federal government. It hadn’t closed to the public, even during several previous federal government shutdowns.

But Tuesday night, as reported by pjmedia.com and The Washington Examiner, the National Park Service sent over the Park Police to physically remove farm staff and visitors, right in the middle of an event for a local Chamber of Commerce. Said Ms. Eberly: “What utter crap. We have operated the farm successfully for 32 years. … But there are barricades at the pavilions and entrance to the farm. … You do have to wonder about the wisdom of an organization that would use staff they don’t have the money to pay to evict visitors from a park site that operates without costing them any money.”

Precisely. The same can be said for the theater that played out last week at various sites around Washington, D.C., including the World War II Memorial and Mount Vernon.

Blocking access to fee-collecting parks is one thing. Blocking access to free information is another. The Interior Department, which oversees the National Park Service, put in the work last week to render its website useless. This act alone reflects a profound disdain for the taxpaying public.

All it takes is one official with one ounce of courage to stand up to the bureaucratic collective and come up with a common-sense solution involving local volunteers to keep recreation areas open. The public would step up. All it takes is one federal employee to realize the stupidity of his orders and open gates instead of close them. That this hasn’t happened yet is a testament to the frightening power of the federal government. The land really isn’t ours. It belongs to Washington. And Washington is determined to protect it from us.

“It’s a cheap way to deal with the situation,” a Park Service ranger told the Washington Times. “We’ve been told to make life as difficult for people as we can. It’s disgusting.”

If a federal worker can man a barricade, he can staff a fee collection booth. Red Rock Canyon and Lake Mead collect fees. At Red Rock Canyon, October is prime hiking and biking season, with perfect weather. Closing the canyon now is the equivalent of a retailer shutting its doors in December. The Bureau of Land Management is turning away business. Is the National Park Service or the BLM prepared to give all those who bought annual access passes a pro-rated refund? Of course not.

The Obama administration and Congress must think the public is as dumb as they are. The shutdown is no reason to keep Red Rock Canyon, Lake Mead or any other national park or monument closed. Open them up. Now.

This op-ed was written by the editorial board of the Las Vegas Review-Journal.