The Liberals’ destructive politics of righteousness 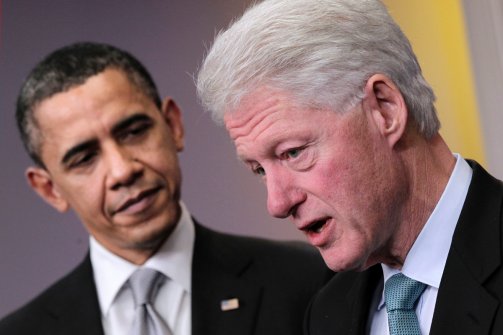 Whether out of anger or of angst, Bill Clinton spoke from the core of liberal presumption when he told a Westchester County, N.Y., journalist recently that Donald Trump “doesn’t know much” but does know “how to get angry white males to vote for him.” After all, this was supposed to be the Republicans’ season of discontent. Instead, Democrats emerged from the election with less political clout on the national and state levels of government than at any time since 1928. And Hillary Clinton was again denied her appointed role in history.

If Trump pursued the politics of resentment in courting white, working-class voters and their rural cousins, liberals succumbed to what I call “the politics of righteousness” in overlooking their concerns and underestimating their power. By righteousness I mean the tendency of liberals  to assume ownership of the moral high ground whenever cultural values and social norms are at issue in American politics — and to presume that those who disagree are, as Hillary Clinton put it, “a basket of deplorables.”

If Democrats want to recapture their old self-image as “the people’s party,” their political self-examination will have to go deeper than strategy and further back than millennials can remember. The party’s alienation from the white working class began in the streets of Chicago outside the 1968 Democratic National Convention. There, antiwar protesters and activists for a host of countercultural causes fought the police of Mayor Richard J. Daley while the nation watched on television. As President Bill Clinton later observed in the first volume of his memoirs, Vietnam was only one point of contention in what was really a wider clash between generations, social classes and moral cultures:

“The kids and their supporters saw the mayor and the cops as authoritarian, ignorant, violent bigots. The mayor and his largely blue-collar police force saw the kids as foul-mouthed, immoral, unpatriotic, soft, upper-class kids who were too spoiled to appreciate authority, too selfish to appreciate what it takes to hold a society together, too cowardly to serve in Vietnam …”

The 1968 convention marked the end of the New Deal coalition that had shouldered Franklin Roosevelt, Harry Truman, John F. Kennedy and Lyndon B. Johnson to the White House. It wasn’t that white working-class Americans turned away from the party so much as that political reformers representing the young, the newly wealthy, the suburban and the higher educated deliberately cut party ties with them. “Boss” Daley, the authoritarian Irish Catholic mayor from the blue-collar Bridgeport neighborhood, became the poster boy for all that was “bigoted” and socially regressive in neighborhood-based, white ethnic America.

Over the next four years, a commission on party structure and delegate selection, with Sen. George McGovern as chairman, introduced a series of reforms ensuring that, culturally as well as politically, the delegates to the 1972 Democratic convention would resemble the young activists who had battled the police in Chicago more than delegates who had been seated inside. The McGovern Commission, as it came to be called, established state primaries that, in effect, abolished the power of the old city and state bosses, most of whom came from white ethnic stock. The commission also established an informal quota system for state delegations to assure greater representation of racial minorities, youths and women that by 1980 became a mandate that half of every state delegation must be women.

The 1972 Democratic platform formally introduced the party’s commitment to identity politics. Rejecting “old systems of thought,” the platform summoned Democrats to “rethink and reorder the institutions of this country so that everyone — women, blacks, Spanish speaking, Puerto Ricans, Native Americans, the young and the old — can participate in the decision-making process inherent in the democratic heritage to which we aspire.” There was also this: “We must restructure the social, political and economic relationships throughout the entire society in order to ensure the equitable distribution of wealth and power.” The delegates put flesh on these lofty moral commitments by adding a plank commending the forced busing of students in order to achieve racial balance in public schools. Blue-collar Boston exploded.

McGovern naively took for granted the traditional party loyalty of union leaders and the white working class. But these pillars of the New Deal collation recognized that McGovern’s creation of a new “coalition of conscience” built around opposition to the war, identity politics and a redistribution of wealth excluded some of their own conscientiously held moral convictions. McGovern went on to lose every state but Massachusetts and the District of Columbia — and with them the party allegiance of blue-collar workers, union leaders and — what often amounted to the same voters — conservative Roman Catholics.

Jimmy Carter was not a member of McGovern’s coalition of conscience: He had his own powerful sense of moral righteousness, one he derived from his Southern Baptist heritage of personal rectitude rather than McGovern’s secularized Methodist heritage of moral uplift and social reconstruction. There was much in that mix that was admirably righteous, especially the instinct to protect racial and sexual minorities from social oppression. The problem is that pursuing righteousness by expanding individual rights at the expense of communal values often creates greater social conflict. As sociologist Robert Bellah argued in 1991, “rights language itself offers no way to evaluate competing claims.” One side wins, the other loses.

The punitive side of political righteousness was on full display at the Democrats’ 1992 convention. New York Gov. Mario Cuomo opened the proceedings by praising his fellow Democrats as the party of inclusion. But the “big tent” he boasted of was too small to include Gov. Bob Casey of Pennsylvania. Casey was the most progressive governor in the country and far more successful in getting his agenda enacted than either Cuomo or presidential nominee Gov. Bill Clinton of Arkansas. Casey was a pro-life Catholic who had found legal ways to limit the sweep of Roe v. Wade that had made him anathema to Planned Parenthood, NARAL Pro-Choice America and other organizational pillars of the party’s post-McGovern coalition of conscience.

The DNC not only refused to allow Casey to address the convention but sought to humiliate him by welcoming a pro-choice Republican opponent from Pennsylvania to the dais instead. Afterward, the DNC sent the woman across the floor to confront Casey (who had left the convention by then) and dispatched a party camera crew to film the expected clash.

The line between political righteousness and party self-righteousness is wavy and easy to cross. The temptation to do so is all the greater when, as now, political party attachments are more divisive than even religion in this country used to be. Democrats have been humbled politically in ways that allow no room for arrogance. They should leave arrogance to the president-elect and embrace the politics of humility as a way of putting their own house back in order.