Freedom Centers Science and Public Policy The Media Got It All Wrong On the New US Climate R ... 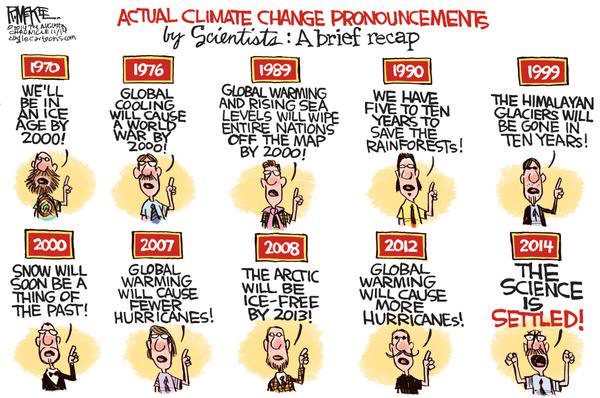 Activists tend to exaggerate the impacts of climate change while underestimating the costs of tackling it. The reception to the new US climate assessment was instructive. The report largely attempts to remain soberly scientific, and follows the even more careful global report by the United Nations’ climate-science panel, known as the IPCC.

Among many others, widely quoted climate scientist Michael Mann talked up the report to NPR and CNN, saying its predictions are already borne out in today’s “unprecedented weather extremes.”

Actually, the assessment, and science, tell a different story. “Drought statistics over the entire contiguous US have declined,” the report finds, reminding us that “the Dust Bowl era of the 1930s remains the benchmark drought and extreme heat event.”

Even more dramatic was CNN’s headline, screaming that “climate change will shrink [US] economy” by 10 percent, a figure also repeated on The New York Times front page.

Actually, the UN’s climate scenarios envision US GDP per capita will more than triple by the end of this century, so this 10 percent reduction would come from an economy 300 percent larger than it is today. A slightly smaller bonanza, in other words.

But the 10 percent figure is itself dodgy. It assumes that temperatures will increase about 14 degrees Fahrenheit by the end of the century. This is unlikely. The US climate assessment itself estimates that, with no significant climate action, American temperatures will increase by between 5 and 8.7 degrees. Using the high estimate of 8.7 degrees, the damage would be only half as big, at 5 percent.

But even the 8.7-degree warming estimate is unrealistically pessimistic. This stems from an extreme high-emission scenario that expects almost the entire world to revert to using massive amounts of coal: a five-fold increase from today.

That, in turn, assumes a much higher amount of fossil fuels than are plausibly available for use, according to one study. Another study likewise found the scenario “exceptionally unlikely.”

So, even a 5 percent reduction in the size of the American economy only follows from picking unlikely worst-case scenarios.

Moreover, two-thirds of the purported 10 percent damage to the economy comes from just one category: heat deaths.

While it is true that more people die when it is unusually hot, it is not true that lives are shorter in hotter places. That’s because people adapt. And studies of migrants show people do so very quickly, within weeks.

Conjecturing that the temperature-mortality relationship in the US would remain constant over a century is ludicrous. This assumes that even if temperatures were to increase by 14 degrees, people would die in masses, ignoring the fact that people have been shown to adjust over time to temperature changes. Then, too, over the 80 years until 2100, people can make many additional changes that reduce this risk, from getting air conditioners to changing how they build structures.

So, the well-reported idea that warming will shrink the economy by 10 percent disregards huge economic growth, assumes twice the damages of the worst-case temperatures the report itself expects and even then only finds such high costs stemming almost exclusively from easily preventable heat deaths.

While activists overstate the costs of climate change, they suggest its reversal is simply a matter of political will. In fact, there are significant costs to climate action: It often involves replacing relatively cheap, efficient fossil fuels with still-uncompetitive green-energy sources.

Climate economist William Nordhaus has shown that a globally coordinated and gradually increasing carbon tax could cut temperature rises to 6.3 degrees from 7.4 at a cost of $20 trillion in lost productivity, but more than pay for itself by lowering climate costs.

Yet this requires a very well-designed, coordinated global policy. In the real world, climate policies are typically less effective and much costlier.

Nordhaus shows that more ambitious policies like the Paris Agreement target of 3.6 degrees would cost some $134 trillion, much more than the associated climate benefits. Such prescriptions for climate change are worse than the disease.

Yes, we need to speed up the transition from fossil fuels by investing in green R&D. Even so, reporting on climate change needs to be grounded in reality. Exaggeration is understandable but dangerous, because it risks wasting resources on the wrong policy answers, and gives ammunition to those who would ignore this real challenge.

Bjorn Lomborg is president of the Copenhagen Consensus Center.