Column: Efforts to remove Trump didn't start with Ukraine. And won't end there. 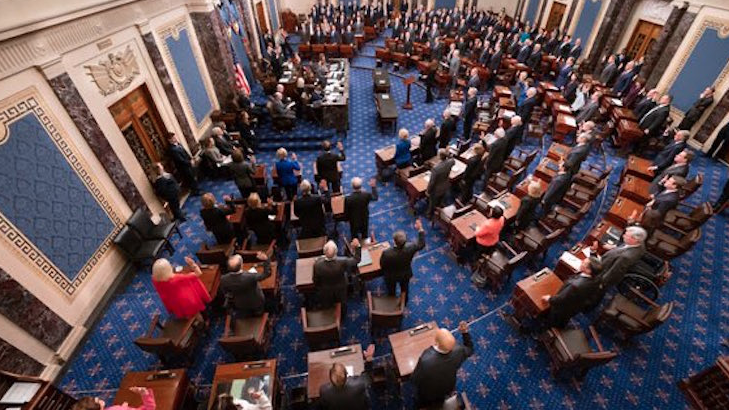 Maybe Nancy Pelosi held on to the impeachment articles because she was waiting for her pens to arrive. The fancy commemorative ballpoints, featuring the speaker’s name engraved in gold, that Pelosi gave to colleagues at Wednesday’s engrossment ceremony quickly became the subject of mockery. Republicans saw them as emblematic of Democratic partisanship and triviality. “Nothing says seriousness and sobriety like handing out souvenirs,” saidMitch McConnell. “As though this were a happy bill-signing instead of the gravest process in our Constitution.”

In Pelosi’s eyes, impeachment is something to celebrate. It’s more than an accomplishment. It’s the most significant product of the 116th Congress. What McConnell calls “the gravest process” has been the preferred means of Democrats to inflict maximum damage on President Trump and possibly remove him from office before the end of his term. The trial that begins on Tuesday has been years in the making. And the drive to impeach Trump won’t end when the verdict is rendered. He may well end up the first president to be impeached multiple times.

Maxine Waters has been chanting “impeach 45” since the spring of 2017. Rep. Al Green introduced the first impeachment resolution that summer. Tom Steyer founded “Need to Impeach” that October. In November 2017 a group of House Democrats introduced additional articles of impeachment. The same thing happened in December 2017, January 2018, March 2019, May 2019, and July 2019. House Democrats accuse Trump of violating the emoluments clause, obstructing justice, associating with white nationalism, separating families of illegal immigrants, and more.

Pelosi resisted. Why? Not because she thought impeachment was wrong. Because none of the articles advanced by the left could win a majority of her caucus.

Then the whistleblower arrived. The story he told about shenanigans in Ukraine was enough to bring aboard moderates from swing districts. The rushed inquiry and polarized vote on two vague and weak articles betrayed the political motivations behind the enterprise. Impeachment shields Pelosi from leftwing recriminations in the event that Trump is reelected and Democrats retain the House. And the investigations, hearings, and trial guarantee a steady stream of bad press for Trump and hostile questions that make some Republicans squirm.

Pelosi is more than happy for additional evidence to be disclosed and for the Senate to call witnesses, even after the House has impeached and when the resolution of the trial is foreordained. It’s not justice she’s after. It’s victory in November. Expect leaks of damaging information before key procedural votes just as happened during the Kavanaugh confirmation fight. When Trump is acquitted or the charges against him dismissed, Democrats will pronounce the verdict illegitimate and accuse Republican senators of involvement in a cover-up. No charge is too outlandish. Pelosi and impeachment manager Hakeem Jeffries have advanced the ridiculous conspiracy that McConnell has “Russian connections” of his own. “It’s a win-win,” Chuck Schumer toldthe New York Times.

There’s a cautionary lesson for Democrats in the Kavanaugh episode. As the allegations against Kavanaugh grew more absurd, and the D.C. climate more inhospitable, Republicans found themselves more unified. The senators that Democrats hope will side with them on procedural motions might demur. Susan Collins, for example, isn’t anybody’s pawn. “I don’t think Chuck Schumer is very interested in my opinion,” she said in a blistering comment to the Times. “I don’t think he’s really very interested in doing anything but trying to defeat me by telling lies to the people of Maine. And you can quote me on that.”

After the House Intelligence Committee dropped a trove of documents from Lev Parnas, the former Giuliani associate under indictment for campaign finance violations, the day before senators were sworn in as jurors, Collins said, “I wonder why the House did not put that into the record and it’s only now being revealed.” Good question!

House Republicans voted in unison against impeachment not because they fear President Trump but because the Democratic case was weak. A similar dynamic might take shape once senators who haven’t been paying attention to the scandal listen—in silence—to the House managers and the president’s attorneys. How the House managers such as Adam Schiff behave on the Senate floor might also sway jurors.

The test of Republican unity will be a motion to call witnesses. Republican senators will have to ask why they would want to make Schumer’s job—winning the Senate for Democrats in 2020—any easier by crossing party lines. Prolonging the trial would legitimize a flawed and politicized investigation. Republicans understand by now that Pelosi and Schumer aren’t engaged in an honest fact-finding mission. They are the leaders of an impeachment that will never end.