Freedom Centers Economic Freedom The number of new businesses in the US is falling ...

We’re supposedly living in the age of startups when people can create new businesses, enrich themselves, and employ their fellow Americans. That narrative, like much economic optimism these days, is now mostly a tale for coastal cities, and a tenuous one at best.

Fewer new businesses were created in the last five years in the US than any period since at least 1980, according to a new analysis (pdf) by the Economic Innovation Group (EIG), a bipartisan advocacy group founded by the Silicon Valley entrepreneur Sean Parker and others. Businesses that did form are also far more concentrated than ever before: just 20 counties accounted for half of the country’s total new businesses. All of them were in large metro areas. 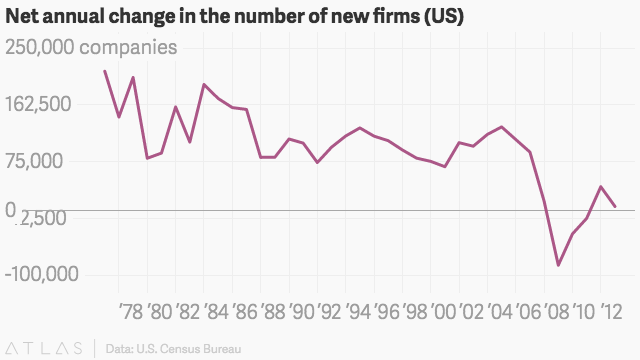 “It’s hard to put into scale the collapse of new business formation. We have no precedent for that rapid and steep of a collapse,” said John Lettieri, co-author of the report and co-founder of EIG, in an interview. “It will have a ripple effect in the economy. You‘re going to feel that impact five, 10, and 15 years in the future.”

The analysis of census data revealed two grim economic stories playing out in America. The first is that prosperity (at least in terms of new businesses) is consolidating in a few predominately urban places, mostly around large cities such as Los Angeles, Miami, Chicago, Dallas, New York, and San Francisco. Just 20 countries accounted for 50% of the new firms created during the post-recession recovery—a sharp break from previous years when new company creation was far more distributed.

Particularly hard hit were sparsely populated, rural areas. In the last post-recession recovery, counties with 100,000 or fewer people generated one-third of the country’s new firms (net) between 1992-96. By comparison, those counties lost 1.2% of their businesses between 2010-2014.

The second story is that the majority of new companies look more like tech companies than the construction firms and restaurants that have typically anchored middle-class prosperity. New business formation over the past five years tracked very closely with access to capital, particularly venture and other forms of risk capital, says the report. Of the top 20 counties, 13 were in just three states (California, New York, and Texas) with ample access to such money. That shift has given highly educated urban dwellers another advantage at the expense of everyone else, a disparity polls suggest is fueling the rise of Republican presidential candidate Donald Trump among working-class, rural Americans.

This great hollowing out of opportunity for rural and non-urban Americans was set in motion and then accelerated by the financial crisis. First, the 2007-2008 crisis gutted the financial sector, even among banks untouched by subprime-mortgage fraud. The number of independent commercial banks dropped by 14% between 2007 through 2013, according to the Federal Reserve (pdf), and the number of people with access to community banks (which traditionally loan to small businesses) plunged by 40%, says EIG. (Some of that reduction may have been mitigated by expansion of larger banks.)

Making this worse, the collapse in housing prices also exhausted one of the only sources of cash for would-be entrepreneurs: equity in their homes. As whole communities saw their savings evaporate, there was little to stave off a downward spiral amid layoffs and stagnation. “Personal wealth is a key ingredient for startups, and there’s not much wealth in these areas,” wrote Narayana Kocherlakota, head of the Federal Reserve Bank of Minneapolis, on Twitter about the report.

The full extent of this damage is now becoming clear.

The political and economic headwinds are now set against entrepreneurs outside metropolitan areas. “A missing generation of firms” will depress employment options and undermine wealth creation for large numbers of Americans, argues Lettieri. Trends are pushing us faster in this direction as capital and knowledge-based economic activity are attracted to large, connected cities. Half-measures and policy tweaks may not be enough to stem this.

“It’s only recently that we’re starting to fully understand the challenge that new companies are facing,” said Lettieri. “You need a proactive and coordinated effort to start reversing that trend. It won’t reverse on its own.”