The Number of ObamaCare Losers Grows 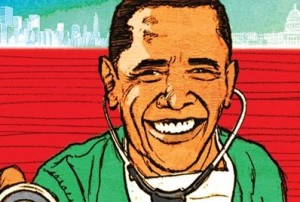 The decision by the Target Corporation to join Trader Joe’s, Home Depot, and other retailers and end health-insurance coverage for part-time employees brings both good news and bad for those hoping that ObamaCare would survive its disastrous rollout and emerge as a permanent part of the American economic and political landscape. The good news is that by dropping 10 percent of its part-time employees from its company insurance, the retailing giant has delivered a significant number of its 361,000 total employees into the ObamaCare insurance exchanges since they have no other option and many will be eligible for subsidies. Since a majority of them may be relatively young and healthy, they could help bolster the anemic ObamaCare enrollment figures and help redress the imbalance created by the disproportionate number of older and sick people on the new plans.

The bad news is that the thousands of Target employees who’ll now be forced to choose between ObamaCare and no coverage at all are not likely to be happy with either option. Unlike the poor and those with pre-existing conditions who understandably view the ACA as a godsend, these new recruits will be saddled with coverage that, even if it is not more expensive is, unlikely to be as good as the insurance they had with their employer. In other words, Target’s decision, like those of many other large businesses that are laying off workers or reducing others to part-time status because of the higher costs of meeting ObamaCare’s new standards, means that the number of Americans who will lose the coverage they had because of the new law is growing.

As Bloomberg reports, the Target decision is directly related to ObamaCare:

The law doesn’t require most companies to cover part-time workers, and offering them health plans may disqualify those people from subsidies in new government-run insurance exchanges that opened in October … The health law requires all companies employing 50 or more people to offer health insurance to those working at least 30 hours a week starting in 2015. Those that don’t comply may be liable for fines of as much as $3,000 per worker. … The move should also reduce the cost of Target’s health benefits.

We already knew that the bland assurances the American public heard repeatedly from the president in his notorious “If you like your health-care plan, you can keep your health-care plan” were patently false. The administration tried to weasel its way out of that lie by claiming that the numbers of those who couldn’t keep their coverage or their doctors were negligible. It soon became clear that several million people who privately purchased insurance would be thrown off their old plans and forced into new ones that were not only more expensive but failed to offer the coverage they wanted. Others lost their doctors as a result of the changes.

But what most of us didn’t realize was that ObamaCare’s negative impact would go far beyond the private insurance market. As the Target decision illustrates, the law’s regulations will force companies to make decisions that will place heavy economic burdens on many of their employees and cause others to lose their jobs entirely or their hard-won full-time status. And that, in turn, means that the pool of ObamaCare losers is increasing so rapidly and precipitously that they’re well on their way to vastly outnumbering those who are better off because of the law’s passage.

Nor is it clear that even more moves such as that of Target, which will push thousands of consumers into the ObamaCare exchanges, will be sufficient to fill them with enough young and healthy people to ensure that the system becomes fiscally sound. With enrollment still millions short of the number needed to keep the scheme afloat, the prospect of federal bailouts for the system creates the likelihood that new battles will keep ObamaCare on the political front burner in a way that could fatally handicap Democrats in the midterm elections.

Democrats have assumed all along that once implemented, ObamaCare would be too popular to be repealed or even modified. Republicans shared the same assumption and even now many worry that no matter how grievous the impact of the law on the American economy, it will be impossible to rescind coverage from those who have gained it via ObamaCare.

But what neither party anticipated was the emergence of an entirely new demographic—the millions upon millions of ObamaCare losers—whose anger over the law could well be a game-changer. More corporate decisions such as Target’s that have the potential to increase the size of this group is bad news indeed for ObamaCare and the Democratic Party that, without a single Republican vote, foisted it upon an unwilling public.