Freedom Centers Constitutional and Political Freedom The Polls That Ate the Presidential Contest ...

The Polls That Ate the Presidential Contest 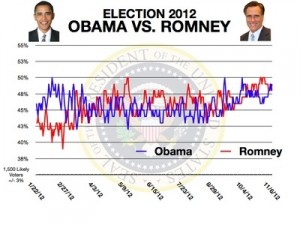 “I don’t know,” a very wise and skeptical Washington political analyst confided to me on Sunday as I limned the Romney victory I foresee. “I’d like to believe it,” she said, “but I have to overlook a lot. If you’re right, then a whole lotta state polls have to be wrong.”

Very true. But I’ll climb all the way out onto a limb and assert that the state polls are wrong — or at least misleading.

Every four years we complain that the press covers the presidential contest as a horse race. This year sets some sort of new standard. This is the year that polls ate the campaign. I can’t recall a presidential election that featured so many surveys or so much analysis of polls. We’ve been so focused on the numbers, the poll sample sizes, the partisan mix of respondents, poll biases and what we’ve all learned to call “the internals” that we’ve almost forgotten what the election is about. Every ad, slip of the tongue and peanut butter sandwich has been polled about. If married, white women in the suburbs of Philadelphia react positively to words like “bipartisanship,” we’ve heard about it. People who cover politics are more familiar with the names Pew, Gallup, Rasmussen and Susquehana than with the names of their own children.

We awake on Election Day to the knowledge that the RealClearPolitics average of national polls has the two candidates in a virtual tie. Obama is up by .4 percent with 47.8 percent; Romney trails at 47.4 percent. Yet, in the 10 battleground states that will decide the Electoral College, and therefore the outcome, Obama is just slightly ahead in all but two.

I’m comfortable on this limb because it’s possible to see the race uncluttered by polling flak out here. The polls are so close that they don’t yield enough information no matter how cleverly we massage the data, examine the internals or parse the turnout projections.

Let’s instead look back at how actual voters have behaved since 2009. In the first year of the Obama presidency, blue New Jersey and purple Virginia (which had gone for Obama in 2008 by 15.5 and 6.3 percent respectively) held gubernatorial elections. A New Jersey newspaper described a Corzine rally that Obama addressed on November 2, 2009: “‘I’m going to need you to knock on doors. I’m going to need you to make phone calls. I’m going to need you to do the same thing you did last year.’ The crowd, which Corzine’s staff estimated at 6,500 people, was on its feet for Obama’s entire speech, cheering and occasionally interrupting him with shouts of adoration.”

After nine more months of Obama stewardship, the nation held its midterm elections. Republicans took control of the House of Representatives with the largest victory since 1948, winning 63 seats. Republicans also won 680 state legislative seats, the most lop-sided victory for one party since the post-Watergate class of 1974. Independent voters were credited with the shift.

When Rep. Anthony Weiner resigned his House seat in 2011 (a twit undone by a tweet), aqua New York held a special election. The seat was won by Bob Turner, a businessman. He was the first Republican to represent the district in over 80 years.

In 2012, arrayed against the full power of labor unions and the Democratic Party, Republican Scott Walker secured a resounding 53 percent victory in azure Wisconsin, beating back a recall attempt.

When an election is close, everything depends upon turnout. Republicans and Republican-leaning independents have been demonstrating for three years that they are willing to get themselves to the polls to pull the lever for candidates who oppose Barack Obama. Polls famously cannot measure the intangible called intensity.

The president retains the loyalty of his ardent supporters. But only a blinkered partisan could fail to notice that the feverish enthusiasm of 2008 among Democrats — particularly among young voters and women — has flagged. Republicans, by contrast, are burning to fire Obama. They are also proud to support an articulate, experienced and honorable man whom they genuinely believe has what it takes to right a listing nation.

Come what may, I will be a poll watcher. I will smile amiably at Democrats — remembering that they are opponents, not enemies — while confidently expecting them to be the minority on Wednesday.

Mona Charen is a syndicated columnist, political analyst and author of Do-Gooders: How Liberals Hurt Those They Claim to Help .