Freedom Centers Economic Freedom The Public Preference for Single-Payer Is Oh So Fr ...

The Public Preference for Single-Payer Is Oh So Fragile 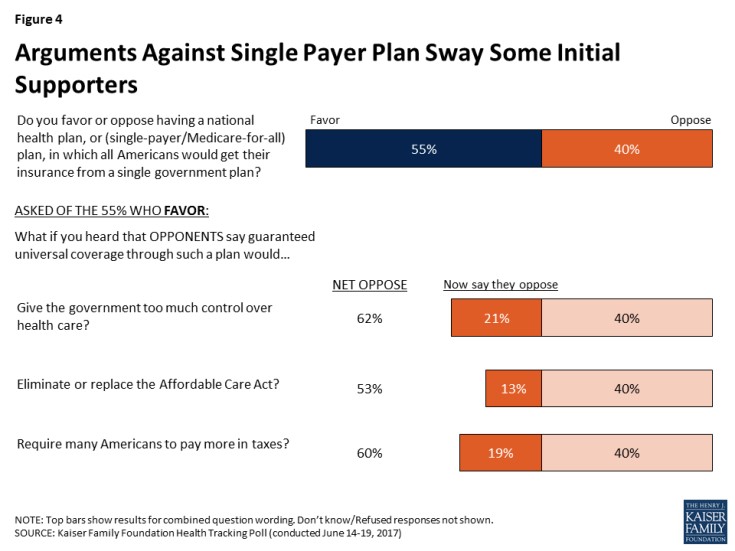 I’m headed up to New York City today, appearing on CNN to discuss Senator Bernie Sanders’ latest proposal for “single-payer” health care and on CNN International to discuss – well, something, possibly the Sanders proposal, perhaps something else.

The coverage of health care rarely suggests that public support for single payer is a mile wide but an inch deep. But this Kaiser poll from July is usefully illustrative. It found that a majority (55 percent) supports “single-payer,” but when respondents hear the argument that it would give the government “too much control,” then 61 percent oppose it.

When you mention the tax increases, 60 percent oppose single-payer. This concept does not enjoy ironclad support from the masses.

People hear “single payer” and think “ah, that’s nice, somebody else will pay.” Once they realize that they’re the ones paying, they’re reticent, and once they realize that the government will get to make the decisions about what procedures they deem cost-effective and which ones aren’t, the notion doesn’t look quite as appealing against the status quo as it did before.

Put another way, Bernie Sanders wants all Americans to enjoy the speedy, compassionate care that our men and women in uniform enjoyed from the Phoenix offices of the Department of Veterans Affairs.

Millions of Americans still don’t have insurance. Millions who do are stuck with high premiums or out-of-pocket expenses. The new system seems to have particular trouble in more rural parts of the country, where sparse populations make it difficult for private insurance markets to thrive. That’s why Republicans have been able to get as far as they have with their repeal effort — and why even Democrats are talking about how they’d like to improve the system.

Cohn’s also pretty honest about the costs and trade-offs from single payer:

Suddenly introducing sharply lower prices, however justified on paper, would be a severe shock to the health ecosystem. Some combination of job losses and care shortages would likely follow, as hospitals, drug- and device-makers, and other parts of the industry scrambled to readjust their business models.

. . . [Single-payer supporters] would also need to sketch out a plausible political scenario for overcoming the inevitable political resistance ― again, not just among familiar rogues in the health care industry, like drug companies, but also among the millions of Americans who are pretty happy with the insurance they have today.