Freedom Centers Economic Freedom The Renewable Fuel Standard is the Problem, Not th ...

The Renewable Fuel Standard is the Problem, Not the Solution 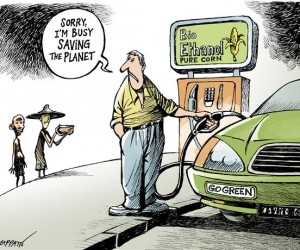 Some time ago, the politicians in Washington decided that mandating the use of so-called renewable fuels in the nation’s energy portfolio would accelerate their development and production on a commercial scale.

It was a large scale test that has failed, for the most part. The Renewable Fuels Standard is based on the assumption that forcing energy producers to utilize corn-based ethanol, cellulosic ethanol, wind power, solar technology and other so-called alternative energy sources would create a market for them. As a result they would be more plentiful and, therefore, cheaper.

It hasn’t worked out that way. The RFS has resulted in increased costs all across the energy sector. Now, with that same sector focused on what the United States Environmental Protection Agency will announce is its proposed RFS for 2014, it’s time for Congress to consider getting rid of it altogether.

Most predictions are that the 2014 RFS will actually lessen the volume of corn-based ethanol required in the U.S. energy portfolio. Capital Alpha Partners, a Washington-based economic intelligence firm, said Tuesday it expected the EPA would reduce the mandate “to 13 billion gallons for 2014, as indicated in the draft numbers leaked last month” and effectively freeze it at that level for the next several years.

That’s a good start, but what Congress should really do is scrap the concept. Now that hydraulic fracturing has generated a boom in natural gas production, and with the U.S. on track to pass Saudi Arabia in oil production, the RFS is an outmoded concept based on European-style central planning that technology has passed by. Moreover, the demand within the energy sector for corn-based ethanol has placed a burden on America’s agricultural producers that has led to increased prices for a lot more than just energy,

“Most Americans don’t understand the costly impact of the Renewable Fuel Standard and in particular the unrealistic ethanol mandate. From dairy farmers to ranchers to restaurateurs, up and down the food chain, Congress is being warned that the price of corn is driving up their cost of doing business,” said Charles T. Drevna, president of the American Fuel & Petrochemical Manufacturers Association.

The numbers all add up on Drevna’s side. Nearly half – 44 percent – of America’s corn crop is being “diverted to produce ethanol,” he said. “Someone is going to pay — and unfortunately that someone is the consumer.”

A stroll through your local grocery store will confirm that observation. Chicken is more expensive. Breakfast cereal is more expensive. Prices have increased for just about anything on the shelves that comes in contact with corn somewhere along the food chain. Adding more corn-based ethanol to the RFS mix, which is really the only option since the promise of cellulosic ethanol made from switch grass and wood chips has yet to be realized, will only drive consumer costs up even further.

There are other ramifications to consider. Increasing the amount of ethanol contained in blended fuel appears to be bad for cars and trucks. “Be they auto, power equipment, or marine to name a few, these engines are not warranted beyond today’s ethanol blend levels,” Drevna said. No one wants to pay more at the pump but no one wants to pay more to their mechanic either because the ethanol in the fuel blend they’ve been using wrecks the engine.

“The problem with renewable fuel isn’t unique to the United States,” Drevna said. “Just look at the European Parliament that in September voted to cap crop-based and land-based biofuel because of environmental concerns and the effect on food prices.”

America may be on the road to becoming a global energy powerhouse once again. The rest of the world, however, seems to be ahead of us in recognizing that corn-based ethanol is not the solution but is, in reality, part of the problem.